[“In this type of geopolitical analysis We the People have no role, no power, in history making.” – Maung Zarni]

21 Jan 2015 — When in November Sai Win Myat Oo, a candidate from the Shan Nationalities League for Democracy, ran for a seat in the Parliament of Shan State, in southern Myanmar, he was confident in his chances of being re-elected. The people of his constituency had consistently voted for the local Shan party in the past.

Yet he lost to a candidate from the National League for Democracy (N.L.D.), the majority-Bamar party led by Daw Aung San Suu Kyi, which swept the general election last year, winning some 80 percent of contested seats in the national Parliament. Apparently, it was the ethnic Wa people of Shan State, many of whom resettled there from northern parts of country in the late 1990s, who cast the decisive votes.

Rumor has it they had received instructions to vote for the N.L.D. from the United Wa State Army — at 30,000-strong, the most powerful rebel group in the country — which is headquartered on Myanmar’s border with China. Chinese sources I spoke to in academe and the intelligence services denied that Beijing had anything to do with those directives. But one senior Shan politician and three Myanmar military insiders said they thought it was Chinese influence that had swung the Wa votes in Shan State. 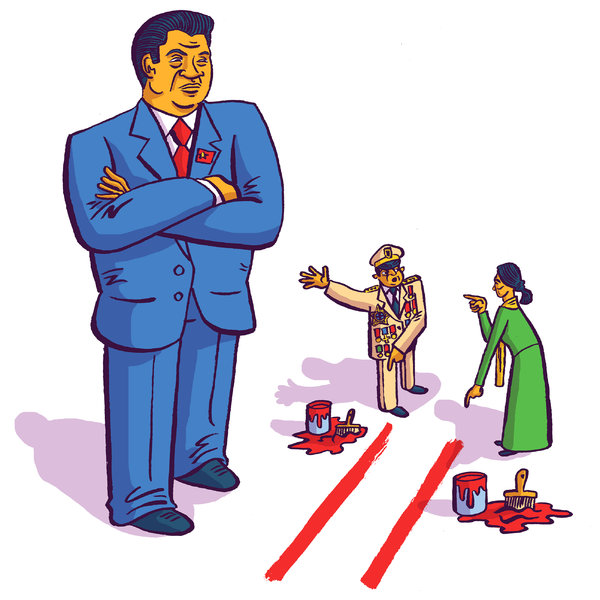 Why would Beijing, which has long backed Myanmar’s military regime and refused to engage with pro-democracy parties, now support the N.L.D.? One reason is that in recent years it saw the political tide turning in Myanmar. Another is that it has come to think of Ms. Aung San Suu Kyi as a consummate pragmatist, and at a time when the Myanmar army, known as the Tatmadaw, was making political and military overtures to the United States and its allies.

But Beijing’s rapprochement with the N.L.D. now threatens the legitimacy of Myanmar’s generals on issues they have long considered to be within their exclusive purview: foreign policy, border affairs, national security, federalism. So while improved relations between China and the incoming N.L.D. government could help quiet unrest in border areas, they could also upset the uneasy balance of power among Myanmar’s elites in Naypyidaw.

China’s relations with Myanmar have ebbed under President Thein Sein, down to lows not seen since the Cultural Revolution in the late 1960s, when anti-Chinese riots broke out and Beijing began backing Communist rebels in Myanmar. Ties had then slowly improved because both Deng Xiaoping and the military-led socialist government in Myanmar maintained a neutral foreign policy.

After a military junta took power in 1988, relations graduated to the level of strategic partnership. That the West promptly marginalized the junta and slapped it with sanctions helped matters along, and for the next two decades political, economic and military cooperation between China and Myanmar deepened. Myanmar offered China natural resources and strategic access to the Bay of Bengal, among other things. Beijing provided Myanmar with aid, arms and military training, as well as diplomatic cover.

Relations soured again when the Myanmar government started to liberalize in 2010. In 2011, the now-nominally democratic government in Naypyidaw suspended construction on the massive Chinese-funded Myitsone hydropower dam project. This was largely in response to local opposition to environmental damage and abusive Chinese business practices. But Beijing saw the move as another sign that the Myanmar government was trying to move away from its zone of influence. It reviewed its Myanmar policy.

In recent years, the Chinese government has courted opposition groups and critics of the Myanmar government — hosting, sometimes even feting, journalists, civil society leaders and representatives from ethnic groups and political parties, including Ms. Aung San Suu Kyi and other senior N.L.D. officials.

Ms. Aung San Suu Kyi, for her part, has adopted positions that are generally accommodating to China’s interests, including some that seem to cut against the N.L.D.’s stated policies, such as the importance of public buy-in in major foreign projects.

To the dismay of some N.L.D. voters, she has said little to challenge the Myitsone project, and has come out in support of a controversial Chinese copper mine, even after the police cracked down on protesters opposing it. She has praised China’s “One Belt, One Road” initiative, a centerpiece of the foreign policy and development strategy of President Xi Jinping. Although she once pleaded with the international community, “Please use your liberty to promote ours,” she has been noticeably quiet about human rights issues in China, including the imprisonment of Liu Xiaobo, a fellow Nobel Peace Prize Laureate.

The Chinese government, meanwhile, seems to have been stirring low-level trouble along the border in order to gain leverage and push its interests, both strategic and economic, in Myanmar. Lately, it has increased its patronage of local ethnic armed groups, especially the United Wa State Army and the Kokang army. Senior Myanmar officials allege that the Kokang insurgency, also in the north, flared up again in 2015 thanks to armament, logistical support and troops provided by China.

The Tatmadaw is now in an awkward position: Any improvement of relations between Beijing and Naypyidaw under an N.L.D. government would be a double-edged sword. Myanmar’s generals would surely welcome some respite from ethnic strife in the north, but they hardly want to be seen as outsourcing security issues to an elected civilian government.

Which may explain why the Tatmadaw has recently taken to describing its fight against ethnic rebel groups as an effort to defend the country’s integrity and sovereignty, rather than as a simple counterinsurgency campaign. By casting local civil conflicts in broader geopolitical terms, it hopes to establish that it is indispensable.

Several political and military officials in Myanmar and intelligence officers in Yunnan have told me they expect Beijing and the N.L.D. to strike some kind of arrangement after the N.L.D. forms a new government in a few months. China would press ethnic rebel groups to cooperate with the N.L.D. on a national cease-fire accord, handing Ms. Aung San Suu Kyi a victory that has eluded the current government. In exchange, the N.L.D. would yield to important Chinese interests in Myanmar, such as major infrastructure and investment projects.

This leaves the Tatmadaw with few cards to play. It cannot try to undermine Ms. Aung San Suu Kyi’s legitimacy or win support from the West by stoking anti-Chinese sentiment — at least not without also running the risk of triggering an aggressive response from China in the northeast. (Or else it would have to go all out, and invoke the clauses in the 2008 Constitution that entitle the military to take power in the case of a national emergency.)

However much the prospect of greater cooperation between the new N.L.D. government and China irks them, Myanmar’s generals may nonetheless be willing to accept it — so long as civilian authorities consult them first. So far Ms. Aung San Suu Kyi has seemed willing to work with the Tatmadaw; she would do well to continue if she hopes for further rapprochement with the Chinese. Peace between Myanmar’s Lady and its generals runs through Beijing.

Min Zin is a contributor to Foreign Policy’s blog Democracy Lab, and serves as a Myanmar expert for think tanks and NGOs like Freedom House.

A version of this op-ed appears in print on January 22, 2016, in The International New York Times.