16 Dec 2015 – It was the chemical weapons attack that so nearly led to direct war between the US, the UK, France and the Syrian government; a war which most likely would have delivered the whole of Syria to IS and Al-Qaeda extremists. 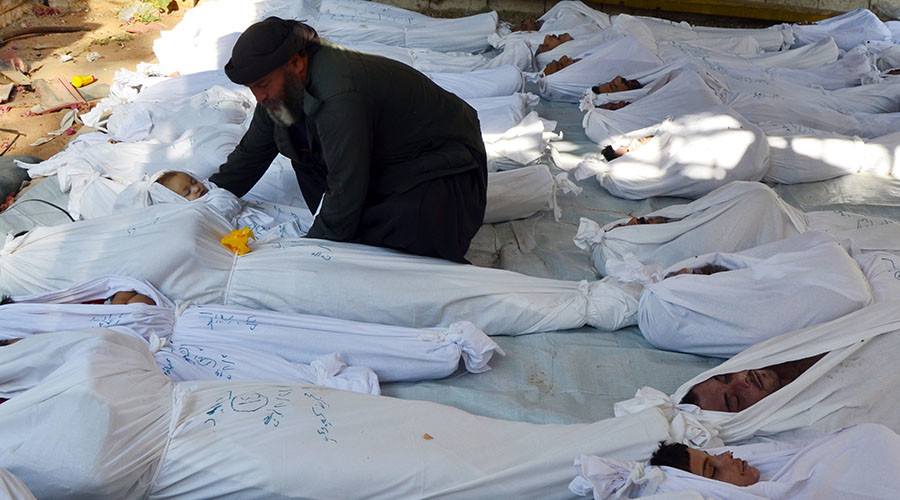 A man holds the body of a dead child among bodies of people activists say were killed by nerve gas in the Ghouta region, in the Duma neighbourhood of Damascus August 21, 2013. © Bassam Khabieh / Reuters

The horrific Ghouta attack of August 21, 2013, which killed hundreds of civilians, including many children, was blamed on President Assad and his government by Western political leaders and elite media commentators.

Those who dared to question this version of events were predictably denounced as ’conspiracy theorists’ and/or ’Assad apologists’.

Today, however, new evidence has emerged that questions the ‘official’ narrative. Could it be that, as was the case with Iraqi WMDs, we were lied to again by those individuals desperate to launch another ‘regime change’ war in the Middle East?

Interestingly, the US and its allies never publicly produced any hard evidence showing that Syrian government forces had carried out the attacks, but told us that it had to be them because no one else possessed or had the capability to use chemical weapons.

But now Turkish MP Eren Erdem has told RT that Islamic State terrorists, then going under the name of Iraqi Al-Qaeda, received all the necessary materials to produce deadly sarin gas via Turkey.

Erdem, who is now being charged with treason for his comments, revealed that an investigation by Turkish police was started but then the case was closed, and all the suspects were released near the Turkish/Syrian border. He accused the Turkish authorities of a high-level cover up.

The Turkish MP says the evidence shows that IS, and not the Syrian government, was responsible for the Ghouta attacks.

“This attack was conducted just days before the sarin operation in Turkey. It’s a high probability that this attack was carried out with those basic materials shipped through Turkey. It is said the regime forces are responsible, but the indictment says it’s ISIS. UN inspectors went to the site but they couldn’t find any evidence. But in this indictment, we’ve found the evidence. We know who used the sarin gas, and our government knows it too,” Erdem said.

It’s not just Erdem’s testimony that challenges the official version of events.

US experts do too. A Massachusetts Institute of Technology (MIT) report by former UN weapons inspector Richard Lloyd and Professor Theodor Postol challenged the intelligence on which US claims against the Syrian government were made.

They revealed that the range of the rocket which was supposed to have carried the nerve gas was too short to have been launched from government-controlled areas.

“The Syrian improvised chemical munitions that were used in the August 21 nerve gas attack in Damascus have a range of about two kilometers. This indicates that these munitions could not possibly have been fired at East Ghouta from the ‘heart’ or the eastern edge of the Syrian government controlled area in the intelligence map published by the White House on August 30th 2013,” the report concluded.

The report pointed out that all the possible launching points for the rocket were in rebel-controlled areas.

“My view when I started this process was that it couldn’t be anything but the Syrian government behind the attack,” said the report’s co-author, Professor Postol. “But now I’m not sure of anything. The administration narrative was not even close to reality. Our intelligence cannot possibly be correct.”

“Most significant, he (President Obama) failed to acknowledge something known to the US intelligence community: that the Syrian army is not the only party in the country’s civil war with access to sarin,” Hersh wrote in a piece entitled ’Whose Sarin?’ in December 2013.

Logic and sheer common sense also suggests that President Assad was not responsible for the attacks.

Imagine you were Bashar al-Assad in August 2013. You know that some of the most powerful nations on earth are desperately looking for an excuse to bomb you, as they know that the ‘rebels’ they’ve been backing aren’t strong enough to topple you and your government without air support.

So what do you do? Well, at the very moment when a team of UN chemical weapons inspectors are in Damascus, you order a chemical weapons attack just 12 kilometers from the center of the capital.

Does that sound logical? If we think that’s what Assad did, then we must believe that he is not only a brutal leader but a foaming at the mouth madman. But what evidence do we have that a man who has ruled Syria since 2000 is actually insane? That’s effectively what the neocons/pro-war lobby are expecting us to believe i.e. that Assad would, right when the UN are in town, do the very thing that the US/UK and others want him to do in order to provide them with a pretext for an attack. What a very obliging fellow that Mr. Assad is!

The faulty logic behind the war lobby’s claims was highlighted by George Galloway MP in his memorable speech against bombing Syria in the British Parliament. “To launch a chemical weapons attack in Damascus on the very day a UN chemical weapons team arrives in Damascus must be a new definition of madness,” Galloway declared.

I was right about the chemical weapons attack on Ghouta though ridiculed at the time. We narrowly avoided going to war on Syria on a hoax.

It’s worth noting where the ’evidence’ that Assad’s forces were responsible for the attack originated. “The bulk of evidence proving the Assad regime’s deployment of chemical weapons, which would provide legal grounds essential to justify any Western military action, has been provided by Israeli military intelligence, the German magazine Focus has reported,” announced the Guardian on August 28, 2013.

According to Fox News, an Israeli military intelligence listening unit, called number 8200 “helped provide the intelligence intercepts that allowed the White House last weekend to conclude that the Assad regime was behind the attack.”

Israel did not publicly release these so-called intercepts, and of course that country had, and still has, a very obvious vested interest in toppling a government allied to Hezbollah and Iran.

The Ghouta chemical attack looked as if it would be the shocking event that would give the war-hawks the chance to bomb Syria and topple the Assad government.

But, unexpectedly, the British Parliament threw a spanner in the works and voted against war. It probably didn’t help that even Prime Minister David Cameron admitted that there was “no 100 percent certainty” about who was responsible for Ghouta.

The bitterness and anger of the neocons afterwards, which I detailed here, told us how badly they had wanted their ’regime change’. Ex-CIA analyst Ray McGovern revealed how he had been in a TV studio with two uber-hawks, Paul Wolfowitz and Joe Lieberman, and remarked on the “distinctly funereal atmosphere.”

“I felt I had come to a wake with somberly dressed folks (no pastel ties this time) grieving for a recently, dearly-departed war.”

Over two years on, it’s frightening to think what would have happened if the neocons had got their war in 2013. The RAF would effectively have become the air force of Al-Qaeda and ISIS. If the Syrian government had fallen in late 2013 or early 2014, radical Islamists and not non-existent ‘moderate rebels‘ would have been the beneficiaries. The black flag of ISIS would be flying high in Damascus and religious executions would be commonplace.

Yet incredibly, those who pressed so hard for war against a secular government fighting the Islamic State and al-Qaeda in 2013, are still upset that they didn’t get their way. UK Chancellor of the Exchequer and fanatical war-hawk George Osborne, said in September that Parliament voting not to bomb Syria in 2013 was “one of the worst decisions ever made.”

In the New Statesman magazine this week, Blairite Labour MP Mary Creagh called the failure to bomb the Syrian government post-Ghouta, “an understandable but unforgivable mistake and the one vote that I deeply regret.”

Yes, you read it right; an MP who voted to bomb ISIS two weeks ago deeply regrets not voting to bomb the government fighting ISIS and al-Qaeda affiliates two years ago.

Despite the official narrative on Ghouta unraveling before our eyes, some pro-Establishment Western media, including the BBC’s flagship current affairs program Newsnight, continues to assert that the chemical attack in Ghouta was carried out by the Assad government, as if it was all 100 percent proven.

My fellow RT Op-Edge columnist Dan Glazebrook lodged an official complaint with the BBC over its broadcasting “without comment,” and with an omission of the word “allegedly,” that President Assad had used chemical weapons at Ghouta.

The governments the BBC referred to were of course those who were itching for an excuse to bomb Syria, namely the US, the UK and France.

We will probably never know for sure who were the evil people who fired the rockets on 21st August 2013, but taking everything into consideration, the likeliest explanation of Ghouta is that it was a ‘rebel’ operation, designed to pave the way for Western bombing of the Syrian government.

“As the months have passed…scientific studies amassing an impressive body of evidence have shown that, not only were Washington’s claims of “certainty” that Assad’s forces had used chemical weapons in their war with extremist fighters utterly baseless, but in fact the reality was quite the opposite, the rebels were the most likely culprits of the attack,” wrote Eric Draitser on the first anniversary of the attacks.

Now we have the explosive testimony of Eren Erdem too.

As was the case with Iraq’s non-existent WMDs, and Iran’s unproven nuclear weapons program, it looks, once again, as if the real conspiracy theorists were those at the top, and not those plucky souls who dared to question the war party line.