The Soul of an Octopus: How One of Earth’s Most Alien Creatures Illuminates the Wonders of Consciousness

“While stroking an octopus, it is easy to fall into reverie. To share such a moment of deep tranquility with another being, especially one as different from us as the octopus, is a humbling privilege… an uplink to universal consciousness.” 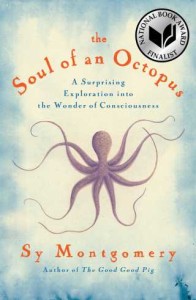 “Despite centuries of investigation by everyone from natural historians, psychologists, and psychiatrists, to ethicists, neuroscientists, and philosophers, there is still no universal definition of emotion or consciousness,” Laurel Braitman wrote in her terrific exploration of the mental lives of animals. Virginia Woolf defined consciousness as “a wave in the mind,” but even if we’re able to ride the wave, we hardly know the ocean out of which it arises.

During my annual visit to NPR’s Science Friday to discuss my choices for the year’s best science books, my co-guest — science writer extraordinaire Deborah Blum — mentioned a fascinating book that had slipped my readerly tentacles, one that addresses this abiding question of consciousness with unparalleled rigor and grace: The Soul of an Octopus: A Surprising Exploration into the Wonder of Consciousness (public library) by naturalist, writer, and documentary filmmaker Sy Montgomery.

Montgomery begins with a seemingly simple premise. The octopus is a creature magnificently dissimilar to us — it can change shape and color, tastes with its skin, has its mouth in its armpit, and is capable of squeezing its entire body through a hole the size of an apple. And since we humans experience reality in profoundly different ways from one another, based on our individual consciousnesses, then the octopus must be inhabiting an altogether different version of what we call reality.

The constellation of complexities comprising this difference, Montgomery reveals over the course of this miraculously insightful and enchanting book, expands our understanding of consciousness and sheds light on the very notion of what we call a “soul.” 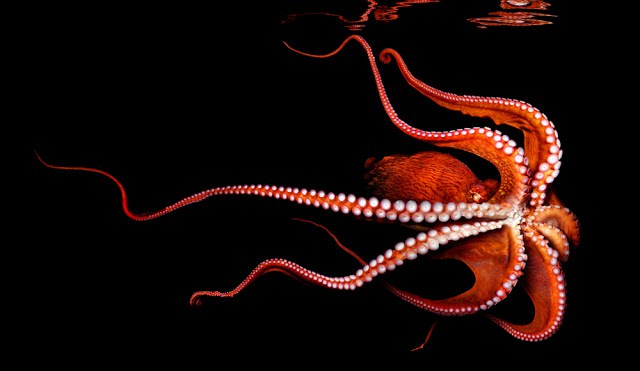 More than half a billion years ago, the lineage that would lead to octopuses and the one leading to humans separated. Was it possible, I wondered, to reach another mind on the other side of that divide? Octopuses represent the great mystery of the Other.

Among the pitfalls of the human condition is our tendency to see otherness as a source of dread rather than an invitation to friendly curiosity. The octopus, as the ultimate Other, has a long history of epitomizing this inclination and sparking our primal fear of the unknown. Montgomery cites one particularly emblematic depiction from Victor Hugo’s novel Toilers of the Sea:

The spectre lies upon you; the tiger can only devour you; the devil-fish, horrible, sucks your life-blood away… The muscles swell, the fibres of the body are contorted, the skin cracks under the loathsome oppression, the blood spurts out and mingles horribly with the lymph of the monster, which clings to the victim with innumerable hideous mouths…

Setting out to “defend the octopus against centuries of character assassination,” Montgomery notes that octopuses have highly individual personalities and can exhibit marked curiosity — faculties we tend to think of as singularly human. Even their motives for friendliness and unfriendliness, far from the baseless brutality of depictions like Hugo’s, parallel our own:

In one study, Seattle Aquarium biologist Roland Anderson exposed eight giant Pacific octopuses to two unfamiliar humans, dressed identically in blue aquarium uniforms. One person consistently fed a particular octopus, and another always touched it with a bristly stick. Within a week, at first sight of the people — looking up at them through the water, without even touching or tasting them — most of the octopuses moved toward the feeder and away from the irritator. Sometimes the octopus would aim its water-shooting funnel, the siphon near the side of the head with which an octopus jets through the sea, at the person who had touched it with the bristly stick.

Surely, a skeptic might argue that this is more instinct than “consciousness.” But Montgomery goes on to outline a number of strikingly specific and context-considered behaviors indicating that octopuses are animated by complex conscious experiences — things we tend to term “thoughts” and “feelings” in the human realm — that upend our delusions of exceptionalism. Lest we forget, we have a long history of bolstering those delusions by putting other species down, much like petty egotists try to make themselves feel big by making other people feel small — even Jane Goodall contended with dismissal and ridicule when she first suggested that chimpanzees have consciousness. 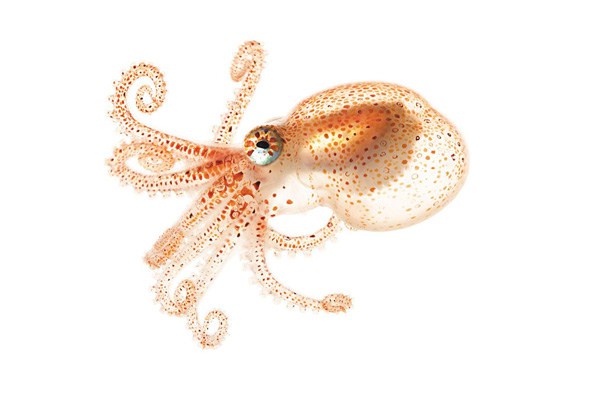 But beyond intellectual considerations of this weird and wonderful creature’s inner life, Montgomery points to the physical, bodily presence with an octopus as a transcendent experience in its own right — one that pulls into question our most basic assumptions about consciousness:

While stroking an octopus, it is easy to fall into reverie. To share such a moment of deep tranquility with another being, especially one as different from us as the octopus, is a humbling privilege. It’s a shared sweetness, a gentle miracle, an uplink to universal consciousness.

Indeed, the book’s greatest reward isn’t the fascinating science — although that is riveting and ablaze with rigor — but Montgomery’s bewitching prose, pouring from the soul of a literary naturalist who paints the marvels of the ocean’s depths like Thoreau did the marvels of the New England woods. Finding herself “drunk with strange splendors” as she beholds the marine world’s “parade of wonders,” Montgomery writes:

A splendid toadfish hides beneath a rock. Once thought to live only in Cozumel, it’s pancake flat, with thin, wavy, horizontal blue and white stripes, Day-Glo yellow fins, and whiskery barbels. A four-foot nurse shark sleeps beneath a coral shelf, peaceful as a prayer. A trumpet fish, yellow with dark stripes, floats with its long, tubular snout down, trying to blend in with some branching coral… A school of iridescent pink and yellow fish slide by inches from our masks, then wheel in unison like birds in the sky.

I have known no natural state more like a dream than this. I feel elation cresting into ecstasy and experience bizarre sensations: my own breath resonates in my skull, faraway sounds thump in my chest, objects appear closer and larger than they really are. Like in a dream, the impossible unfolds before me, and yet I accept it unquestioningly. Beneath the water, I find myself in an altered state of consciousness, where the focus, range, and clarity of perception are dramatically changed.

Suddenly acutely aware that the octopuses she has met and come to love on her expeditions experience this dizzying otherworldliness as their basic backdrop of existence, she considers the limited array of sensations and perceptions that we’ve come to accept as the whole or reality:

The ocean, for me, is what LSD was to Timothy Leary. He claimed the hallucinogen is to reality what a microscope is to biology, affording a perception of reality that was not before accessible. Shamans and seekers eat mushrooms, drink potions, lick toads, inhale smoke, and snort snuff to transport their minds to realms they cannot normally experience.

In my scuba-induced altered state, I’m not in the grip of a drug: I am lucid in my immersion, voluntarily becoming part of what feels like the ocean’s own dream.

Out of this perspective-shifting consideration arises Montgomery’s most profound inquiry. Sitting in a Tahitian temple dedicated to the spirit of the octopus, where one of her expeditions has taken her, she wonders:

What is the soul? Some say it is the self, the “I” that inhabits the body; without the soul, the body is like a lightbulb with no electricity. But it is more than the engine of life, say others; it is what gives life meaning and purpose. Soul is the fingerprint of God.

Others say that soul is our innermost being, the thing that gives us our senses, our intelligence, our emotions, our desires, our will, our personality, and identity. One calls soul “the indwelling consciousness that watches the mind come and go, that watches the world pass.” Perhaps none of these definitions is true. Perhaps all of them are. But I am certain of one thing as I sit in my pew: If I have a soul — and I think I do — an octopus has a soul, too.

This, no doubt, is what Alan Watts meant when he asserted that “Life and Reality are not things you can have for yourself unless you accord them to all others.”

The Soul of an Octopus is an astoundingly beautiful read in its entirety, at once scientifically illuminating and deeply poetic, and is indeed a worthy addition to the best science books of the year.