Where Were the Post-Hebdo Free Speech Crusaders as France Spent the Last Year Crushing Free Speech?

8 Jan 2016 – It’s been almost one year since millions of people — led by the world’s most repressive tyrants — marched in Paris ostensibly in favor of free speech. Since then, the French government — which led the way trumpeting the vital importance of free speech in the wake of the Charlie Hebdo killings — has repeatedly prosecuted people for the political views they expressed, and otherwise exploited terrorism fears to crush civil liberties generally. It has done so with barely a peep of protest from most of those throughout the West who waved free speech flags in support of Charlie Hebdo cartoonists.

That’s because, as I argued at the time, many of these newfound free speech crusaders exploiting the Hebdo killings were not authentic, consistent believers in free speech. Instead, they invoke that principle only in the easiest and most self-serving instances: namely, defense of the ideas they support. But when people are punished for expressing ideas they hate, they are silent or supportive of that suppression: the very opposite of genuine free speech advocacy. 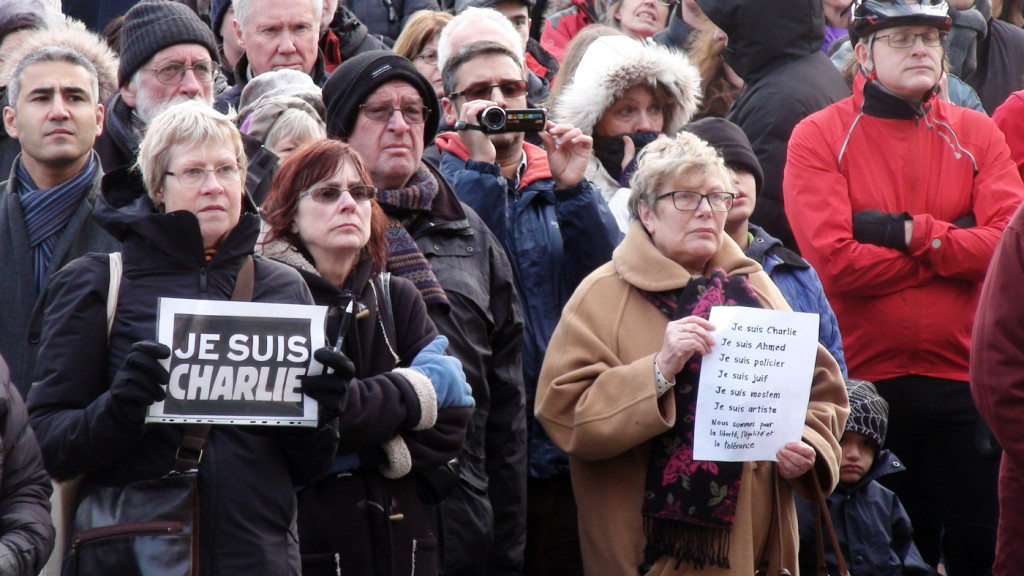 Days after the Paris march, the French government arrested the comedian Dieudonné M’bala M’bala “for being an ‘apologist for terrorism’ after suggesting on Facebook that he sympathized with one of the Paris gunmen.” Two months later, he was convicted, receiving a suspended two-month jail sentence. In November, on separate charges, he was convicted by a Belgian court “for racist and anti-Semitic comments he made during a show in Belgium” and was given a two month prison term. There were no #JeSuisDieudonné hashtags trending, and it’s almost impossible to find the loudest post-Hebdo Free Speech crusaders denouncing the French and Belgian governments for this attack on free expression.

In the weeks after the Free Speech march, dozens of people in France “were arrested for hate speech or other acts insulting religious faiths, or for cheering the men who carried out the attacks.” The government “ordered prosecutors around the country to crack down on hate speech, anti-Semitism and glorifying terrorism.” There were no marches in defense of their free speech rights. 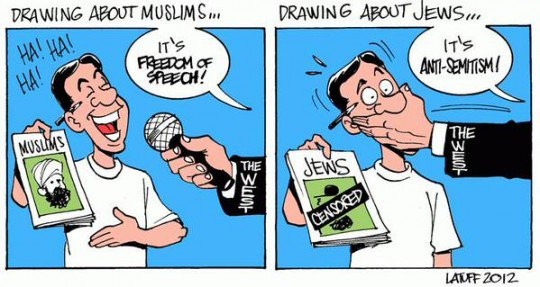 In October, France’s highest court upheld the criminal conviction of activists who advocate boycotts and sanctions against Israel as a means of ending the occupation. What did these criminals do? They “arrived at the supermarket wearing shirts emblazoned with the words: ‘Long live Palestine, boycott Israel’” and “also handed out fliers that said that ‘buying Israeli products means legitimizing crimes in Gaza.’” Because boycotts against Israel were deemed “anti-semitic” by the French court, it was a crime to advocate it. Where were all the post-Hebdo crusaders when these 12 individuals were criminally convicted for expressing their political views critical of Israel? Nowhere to be found.

More generally, the French government seized “emergency powers” in the wake of the Paris attack that they originally said would last twelve days. It was then extended to three months, and there is now talk, as the deadline approaches, of extending those powers indefinitely or permanently. Those powers have been used exactly as one would suspect: to barge into places without warrants where French Muslims gather, shut mosques and coffee shops, detain people with no charges, and otherwise abolish basic liberties. They’ve also now been used beyond the Muslim community, against climate activists. If that sort of classic, creeping repression does not anger and upset you, then you may be many things, but a genuine advocate of free expression in France is not one of them. 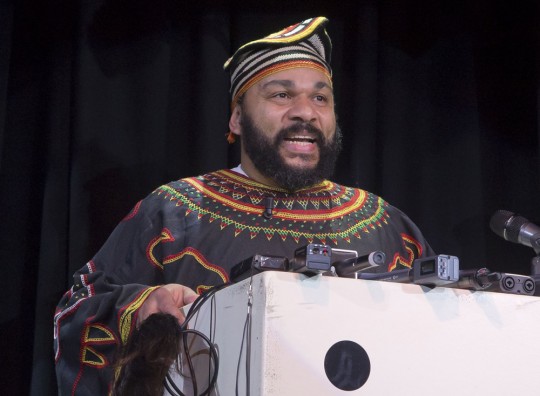 French comic Dieudonné M’bala M’bala speaks to the media during a press conference in a theater in Paris, Jan. 11, 2014.  Michel Euler/AP

Even before the Hebdo murders, prosecutions in Europe against Muslims for the expression of their political opinions were common, especially when those opinions were critical of Western policy. Indeed, a week before Hebdo, I wrote an article detailing that growing threat to free speech in the U.K, France and throughout the West. Those types of actions — carried out by the world’s most powerful governments — were, and remain, the greatest threat to free speech in the West. Yet they receive a tiny fraction of the attention that the Hebdo killings did. 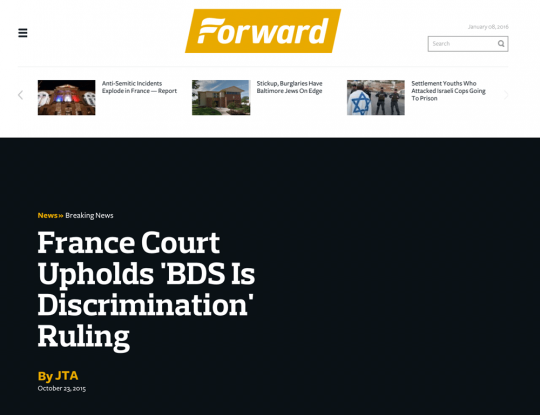 Where were, and where are, all the self-proclaimed free speech advocates about all of that? It was only when anti-Islam cartoons were at issue, and a few Muslims engaged in violence, did they suddenly become animated and passionate about free speech. That’s because legitimizing anti-Islam rhetoric and demonizing Muslims was their actual cause; free speech was just the pretext.

In all the many years I’ve worked in defense of free speech, I’ve never seen the principle so blatantly exploited for other ends by people who plainly don’t believe in it as was true of the Hebdo killings. It was as transparent as it was dishonest. Their actual agenda was illustrated by how they invented a brand new free speech standard specially for that occasion: in order to defend free speech, one must not merely defend the right to express an idea, they decreed, but must embrace the idea itself.

This newly-minted “principle” is, in fact, the exact antithesis of genuine free speech protections. Central to an actual belief in free speech rights is the view that all ideas — those with which one most fervently agrees and those one finds most loathsome and everything in between — are entitled to be expressed and advocated without punishment. The most important and courageous free speech defenses have typically come from those who simultaneously expressed contempt for an idea while defending the rights of other people to freely express that idea. This is the principle that has long defined authentic free speech activism: those ideas being expressed are vile, but I will work to defend the right of others to express them.

Those who exploited the Hebdo murders sought to abolish this vital distinction. They insisted that it was not enough to denounce or condemn those who murdered the Hebdo cartoonists. Instead, they tried to impose a new obligation: one must celebrate and embrace the ideas of the Hebdo cartoonists, support the granting of awards to them, cheer for the substance of their views. Failure to embrace the ideas of Charlie Hebdo (rather than just their free speech rights) subjected one to accusations — by the world’s slimiest smear artists — that one was failing to uphold their rights of free expression or, worse, that one sympathized with their killers.

This cheap bullying tactic — trying to force people not merely to defend Hebdo’s free speech rights to but to embrace the ideas being expressed — has endured to this day (but only when it comes to speech critical of Muslims). A full year later, it’s still common to hear supporters of Western militarism falsely accuse portions of “the left” of having sanctioned or justified the attack on Charlie Hebdo solely on the ground that they refused to cheer for the content of Hebdo’s ideas.

This accusation is an absolute, demonstrable lie, an obvious slander. I’ve never heard a single person on the left express anything other than revulsion at the mass murder of the Hebdo cartoonists, nor have I ever heard anyone on the left suggest that the murders were “deserved” or that the cartoonists “had it coming.” I certainly did hear, and myself expressed, opposition to the relentless targeting of a marginalized minority in France by Hebdo cartoonists (that critique, just by the way, was most eloquently expressed by a former Hebdo staffer, Olivier Cyran: “The obsessive pounding on Muslims to which [Hebdo] has devoted itself for more than a decade has had very real effects. It has powerfully contributed to popularising, among ‘left-wing’ opinion, the idea that Islam is a major ‘problem’ in French society”). But objections to the substance of an idea quite obviously does not denote or even suggest a failure to uphold the rights of free speech for those who express that idea: unless you’re endorsing the noxious, deceitful, entirely novel concept that one can only defend the free speech rights of those with whom one agrees.

But this all highlights that free speech was not the principle being upheld here; free speech was just a weapon used by some tribalistic Westerners to try to force people into cheering for anti-Islam and anti-Muslim cartoons (not merely the right to publish the cartoons without punishment or violence, but the cartoons themselves).

And what even more powerfully demonstrates the sham at the heart of this post-Hebdo spectacle is that before the Paris march, and especially since, there has been a systematic assault on the free speech rights of huge numbers of people in France and throughout the West who are either Muslim and/or critics of the West or Israel, and the newfound Hebdo free speech crusaders have exhibited almost no opposition, and at times tacit or explicit support. That’s because free speech was their cynical weapon, not their actual belief.