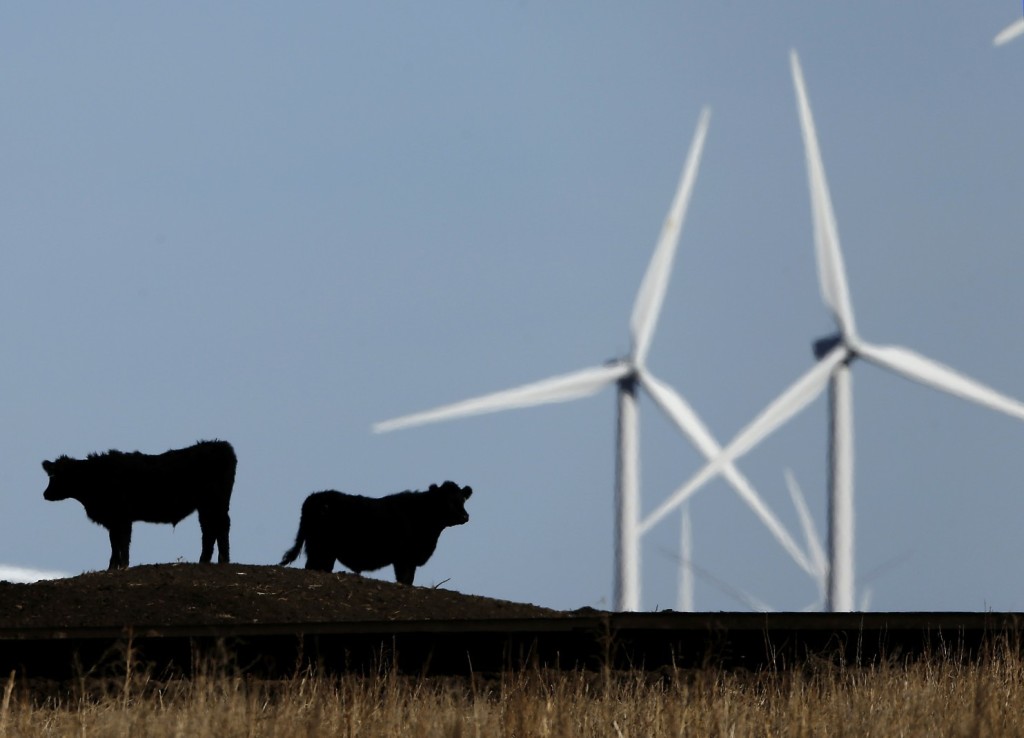 Cattle graze in a pasture against a backdrop of wind turbines that are part of the 155-turbine Smoky Hill Wind Farm near Vesper, Kan. (Charlie Riedel/AP)

1 Jan 2016 – Wind and solar power appear set for a record-breaking year in 2016 as a clean-energy construction boom gains momentum in spite of a global glut of cheap fossil fuels.

Installations of wind turbines and solar panels soared in 2015 as utility companies went on a worldwide building binge, taking advantage of falling prices for clean technology as well as an improving regulatory and investment climate. Both industries have seen stock prices jump since Congress approved an extension of tax credits for renewables as part of last month’s $1.14 trillion budget deal.

Orders for 2016 solar and wind installations are up sharply, from the United States to China to the developing economies of Africa and Latin America, all in defiance of stubbornly low prices for coal and natural gas, the industry’s chief competitors.

Vestas, based in Denmark, is one of three major turbine makers whose stock price doubled in 2015 amid a surge of new orders from North America, Europe, Africa and Asia. Among the leading customers were U.S. utility companies, many of them in conservative Southern states such as Texas, the biggest U.S. producer of wind-
generated electricity. In December, wind energy in the United States passed the 70-gigawatt threshold, with 50,000 spinning turbines producing enough power to light up 19 million homes. 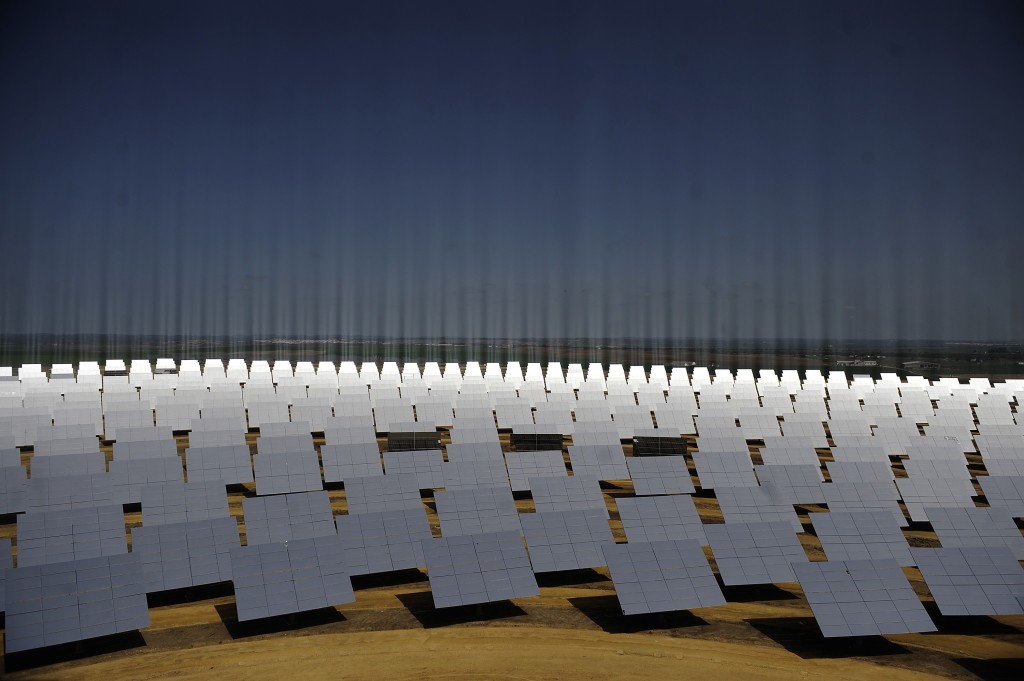 Energy analysts say the boom is being spurred in part by improved technology, which has made wind and solar more competitive with fossil fuels in many regions. But equally important, experts say, is better access to financing, as major Wall Street investment houses adopt a more bullish posture toward an industry that was once considered financially risky. In November, Goldman Sachs announced it was quadrupling its investments in renewables to $150 billion.

“Renewables have turned a corner in a fundamental way,” said Dan Reicher, a former Energy Department assistant secretary who is now executive director of Stanford University’s Steyer-Taylor Center for Energy Policy and Finance.

While solar and wind power have been expanding in the United States for years because of steadily falling costs, decisions by Congress and the White House in 2015 have set the stage for continued growth, Reicher and other energy experts say.

These decisions include last month’s extension of the production tax credit, which encourages investments in solar and wind through 2019, as well as the Obama administration’s Clean Power Plan, a regulation adopted in August that requires states to reduce emissions from power plants. Clean-energy companies also received an important boost from last month’s climate accord in Paris, where more than 190 countries approved a plan to reduce pollution from fossil-fuel burning worldwide.

“The policy base for renewables has strengthened, both on the incentives side and through mandates,” Reicher said. “At the same time, the financing of renewable-energy projects has become a mainstream business for Wall Street. The early-stage investments from Silicon Valley for clean energy were small potatoes compared to the massive investments Wall Street is making. It truly is a global business.”

Signs of the industry’s momentum appear in surprising places.

In China, the world’s leader in coal consumption and greenhouse-gas emissions, demand for coal is down for the second straight year, while investment in solar and wind is soaring, according to figures released last month by the International Energy Agency. China is expected to double its wind-power capacity to nearly 350 gigawatts over the next decade, more than any other country. Officials also intend to generate 200 gigawatts of solar by 2020.

India recently unveiled plans to install 175 gigawatts of renewable energy by 2022, and African nations have committed to adding 300 gigawatts of clean-energy capacity by 2030.

A gigawatt — a billion watts — is roughly the amount of energy needed to power 700,000 typical U.S. households. By comparison, the capacity of the entire U.S. electric grid is just under 1,100 gigawatts.

Still, the industry is experiencing rapid growth across the country. Solar installations were on track to hit a new yearly high in 2015, with 7 gigawatts installed and more in the construction phase. Nationwide, wind power accounts for nearly a third of all new electric-power capacity.

“We are experiencing a clean- energy revolution in the United States,” Energy Secretary Ernest Moniz said in November. “We have the tools for a cleaner and more secure energy future.”

Energy experts caution that renewables still have far to go. Wind and solar together account for only about 6 percent of U.S. electricity generation, compared with about 39 percent for coal. And wind and solar companies have yet to conquer the biggest challenge for renewables: how to cheaply store energy so it is reliably available on cloudy or calm days.

Analysts also warn that renewables could suffer if prices for natural gas remain at such historically low levels for many months or years. For now, however, industry officials say cheap fossil fuels are having little impact on purchase orders.

Runevad, the Vestas CEO, said the recent drop in prices for traditional fuels has prompted some of his customers to increase their spending on wind farms, especially in countries that are heavy importers of petroleum.

“Some countries are having a budget surplus now because of low oil prices, and they’re using that money to invest in new infrastructure,” he said. “For importing countries, it’s a net positive. Because of the uncertainty with gas prices, we haven’t seen any of our wind customers say, ‘Let’s build a gas-fired plant instead.’ ”

Runevad, who recently signed major deals to sell turbines to China and India, is confident that developing economies will ultimately choose renewables over cheap coal. India and China suffer from high levels of air pollution — mostly because of their heavy use of coal — which contributes to thousands of premature deaths annually.

“These countries need additional electricity,” he said, “but they’re also seeing a good opportunity with wind to skip over a generation of technology.”

Joby Warrick joined the Post’s national staff in 1996. He has covered national security, intelligence and the Middle East, and currently writes about the environment.