12 Feb 2016 – Astronomers from the Laser Interferometer Gravitational-wave Observatory (LIGO) Collaboration have published the first detection of gravitational waves, ripples in the fabric of space and time. The announcement comes almost exactly a century after Albert Einstein, in mid-1916, predicted the existence of the waves on the basis of his Theory of General Relativity.

The findings were announced at a press conference at the National Science Foundation in Washington, D.C. on Thursday morning. They open up a new era in humanity’s efforts to investigate the universal laws of the motion of matter. Until now, there has been no way to directly detect the subtle gravitational vibrations which pass continuously through Earth as they do throughout the Universe. Now, however, a new spectrum of gravitational wave astronomy has begun, allowing scientists to examine regions of the cosmos previously excluded from study.

The detected wave was generated by the merger of two black holes more than one billion light years from Earth. Today’s announcement, therefore, contains two separate discoveries: the detection of gravitational waves and the first-ever observation of a black-hole binary merger, an event which had been theoretically predicted, but never seen. Black holes are so gravitationally strong that even light cannot escape their pull, which has prevented us from directly observing them until now. 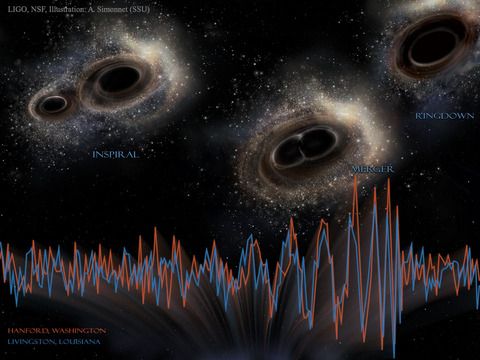 The three stages of the collision of two black holes – inspiral, merger and ringdown – illustrated above. The signal detected by the two LIGO instruments is superimposed across the bottom. Credit: LIGO, NSF, Aurore Simonnet (Sonoma State U.)

The paper published today in the journal Physical Review Letters is titled, “Observation of Gravitational Waves from a Binary Black Hole Merger.” It is jointly authored by the LIGO Scientific Collaboration and another gravitational wave detector team, the VIRGO Collaboration. A second paper has also been published outlining the astrophysical implications of the discovery. In total, twelve publications have resulted from this discovery with many more to come.

According to the first paper, the wave passed through Earth on September 14, 2015, at 09:50:45 UTC. This was just two days into the first three-month run by the LIGO detectors after they had received a major upgrade over the previous five years. The two detectors are located in Livingston, Louisiana and Hanford, Washington, both in the United States. The wave was observed at both detectors, with a seven millisecond delay between the two.

The most intense part of the wave passed in a fleeting quarter of a second. In this time, the wave frequency increased from 35 to 150 Hz, as the relative velocity of the black holes sped up to half the speed of light. Just before merging, they were orbiting each other seventy five times per second and separated by just 350 kilometres. Nothing other than black holes would be compact enough to reach such speeds at this proximity.

The two black holes weighed approximately 29 and 36 times the mass of our Sun before the merger. But the final black hole weighs just 62 solar masses—three less than the sum of its constituents. The missing three solar masses were radiated away as energy in gravitational waves, distorting and bending the surrounding spacetime.

Put another way, in the last moments of the collision, the power radiated away by gravitational waves peaked at more than fifty times greater than the combined visible radiation of every star and gas cloud in the Universe. It is the most energetic event ever detected.

A computer simulation of the collision of two black holes. Time has been slowed down one hundred times to more clearly observe the inspiral, merger and ringdown. Credit: SXS Project

When speaking about gravitational waves, the obvious question is: what is “waving?”

The existence of these waves flowed from the new equations of gravity which Einstein developed in 1915. The classical theory of gravity, which had been established by Isaac Newton, described it as a force acting instantaneously at a distance between any two objects with mass. Moreover, gravitational interactions were seen to take place against a completely fixed backdrop of space and time, itself completely independent from the motion of matter.

With Einstein’s theory, space and time were seen as a unified, dynamic entity. Gravity is the result of the warping of spacetime by the local presence of mass and energy. Moreover, while mass/energy warps spacetime, the curvature of spacetime itself tells matter how to move. (A more comprehensive review of the development and theory of General Relativity can be read here.)

A classic analogy is to consider the four-dimensional spacetime as a two-dimensional flat elastic sheet. Placing a mass on the sheet causes it to bend, and alters the motion of other nearby bodies. Gravitational waves can also be understood with this analogy. Wiggling a very heavy mass very quickly on the sheet will generate ripples, as the membrane seeks to overcome the local build-up of stress by releasing tension outwards. In the case of gravitational waves, what is “wiggling” is the lengths of spacetime. 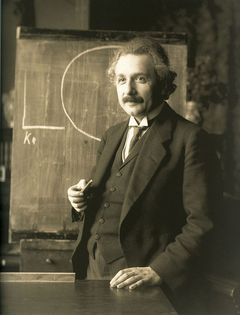 Before yesterday’s announcement, there had already been strong indirect evidence for gravity waves. Two orbiting neutron stars, discovered in 1974 by Russell Hulse and Joseph Taylor, were seen to slowly approach one another at the rate predicted by their expected gravitational wave emission.

Direct detection of gravitational waves is far more challenging. Gravity is by far the weakest force, and only enormous masses changing their orientation rapidly can make appreciable waves in spacetime. Why gravity is much weaker than the other fundamental forces in nature remains a central question in physics.

To detect these waves, LIGO uses two lasers shooting down two four-kilometre tracks that are at right angles to each other. As a gravitational wave passes across the tracks, one track lengthens and one track contracts. This is revealed in the interference of the two lasers when they meet at the base of the tracks. But the change is exceedingly small: the detected gravitational wave made each four-kilometre track change in length by less than one thousandth of the width of a proton.

This means the apparatus effectively had to measure the distance between Earth and the nearest star, Proxima Centauri, to the accuracy of the width of a human hair. The experiment is the most precise humans have ever conducted.

To reach the sensitivity required, the scientists had to develop novel means of suppressing “noise” caused by vibrations of the mirrors from other sources. The detector is sensitive to the crashing of waves on the shore hundreds of kilometres away, wind outside the facility, and thermal vibrations due to heating of the mirrors by the laser itself. As well as using a complicated system of pulleys and magnetic vibrational suppressors, and placing the detectors in a vacuum, the LIGO team also requires that any signal on one detector is seen on the other, to rule out the possibility of a local event being falsely reported as a gravitational wave originating in deep space.

The success of this experiment is the product of more than two decades of scientific collaboration involving researchers from all over the world. The LIGO Scientific Collaboration includes more than 1,000 scientists, including contributors from Japan, Germany, India, Italy, Russia, China and Australia, as well as the United States.

The recently upgraded “Advanced” LIGO detector is the most sophisticated of a new generation of gravity interferometers. The original LIGO was first proposed in 1989 and gained funding in 1992, with the aim of demonstrating the feasibility of the experiment. New upgrades, based on technologies that would be developed later, were planned from the outset.

Over the same period, increased computational power and techniques have opened up the field of numerical relativity, which was not previously possible due to the enormous computational complexity of Einstein’s equations. These simulations allowed the LIGO team to compare their detection with the theoretically predicted signal from a black hole binary merger. 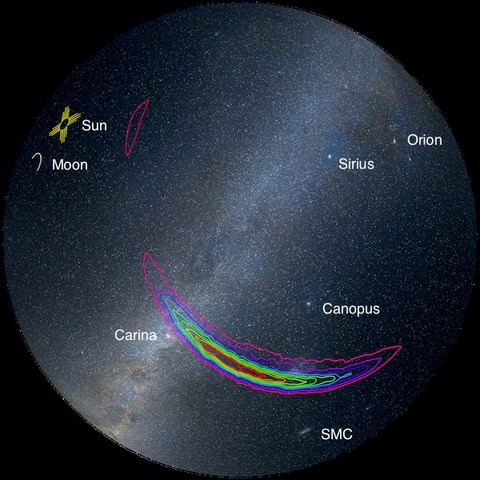 The binary black hole merger that created GW150914 happened in Earth’s southern hemisphere approximately 1.3 billion light years away. The colored lines are regions where the signal likely originated. The exact location cannot be determined with the data of only two detectors. A third will enter service later this year. Credit: LIGO Collaboration

Other detectors already exist, and are being upgraded or built. These include the VIRGO detector in Italy and the KAGRA detector in Japan. There are also plans for another LIGO detector in India. Earlier this year, the LISA Pathfinder mission was launched into space, with the aim of testing the technologies for a space-based gravitational wave detector. Having an array of detectors will allow astronomers to triangulate the wave signal and pinpoint the source location, meaning astronomers using conventional electromagnetic telescopes can be notified of where to point their detectors.

The opening up of gravitational wave astronomy has vast implications. It will provide for tests of the validity of Einstein’s theory of General Relativity in the domain of very strong fields and high speeds, such as around black holes. It also allows us to look into the interior of neutron stars, whose incredible densities offer a physical laboratory that could not be replicated on Earth. Moreover, while dust and other matter obscure our observation of the distant universe using light, gravitational waves—because they interact so weakly with matter—reach us relatively unimpeded.

But as well as providing some answers, the introduction of an entirely new, gravitational spectrum will undoubtedly raise new, and entirely unexpected, questions. As Kip Thorne, a LIGO co-founder and a world expert in relativity theory, commented to Physics World: “LIGO has opened a new window on the universe—a gravitational-wave window. Each time a new window has opened up there have been big surprises—LIGO is just the beginning. Until now, we as scientists have only seen warped space-time, when it’s very calm. It’s as though we’d only seen the surface of the ocean on a very calm day when it’s quite glassy. We had never seen the ocean in a storm, with crashing waves. All of that changed on 14 September 2015. The colliding black holes that produced these gravitational waves created a violent storm in the fabric of space and time. A storm in which time speeded up and slowed down, speeded up again.”