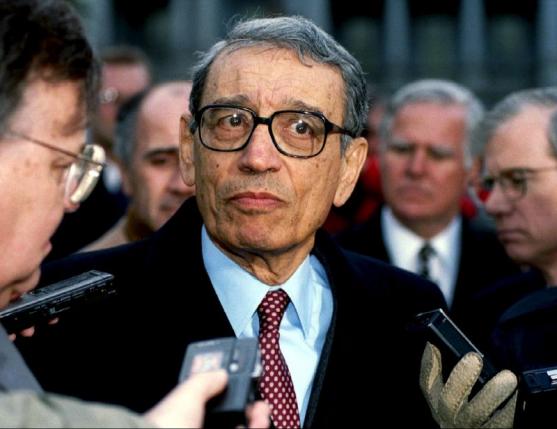 U.N. Secretary-General Boutros Boutros-Ghali is surrounded by members of the media as he leaves the White House after meeting U.S. President Bill Clinton, in this February 23, 1993 file picture. Reuters/Stringer/Files

Former U.N. Secretary-General Boutros Boutros-Ghali, a blunt-spoken Egyptian who led the world body through global turmoil as it defined its peacekeeping role and lost his job over disputes with Washington, died on Tuesday [16 Feb 2016]. He was 93.

Boutros-Ghali headed the United Nations from 1992-1996, chaotic years marked by war in the former Yugoslavia and famine and genocide in Africa. He died at Al Salam Hospital in Cairo on Tuesday, a hospital official said. Egypt’s state news agency MENA said he had a broken leg and heart and kidney problems.

The 15-member U.N. Security Council observed a minute’s silence after his death was announced.

U.N. Secretary-General Ban Ki-moon issued a statement praising Boutros-Ghali for leading the organization through “one of the most tumultuous and challenging periods in its history.”

“He showed courage in posing difficult questions to the member states and rightly insisted on the independence of his office and of the secretariat as a whole,” Ban said.

Boutros-Ghali came from a wealthy family with an impressive political lineage and he bridged several realms. As an Egyptian, he was able to claim to be both Arab and African. He was a Coptic Christian from a mainly Muslim country and married an Egyptian Jew, who converted to his religion.

As the first post-Cold War secretary-general, Boutros-Ghali could be blunt and almost undiplomatic in dealing with critics and assessing the state of the world.

From the perspective of destitute Africans, he said, the situation in Yugoslavia looked like “the war of the rich.” He said British media criticism of him might have been “because I’m a wog” – a pejorative term dating to colonial times.

Boutros-Ghali was the United Nations’ first secretary-general from Africa. He focused on the famine in Somalia and organized the first massive U.N. relief operation in the Horn of Africa nation.

But success eluded him there and elsewhere as the United Nations tottered in an increasingly disorderly post-communist world, with the world body and the big Security Council powers underestimating the deep animosity behind many conflicts.

Boutros-Ghali, who had a reputation for being proud and prickly, also took on the daunting task of reorganizing the U.N. bureaucracy by slashing posts and demoting officials at a pace that earned him the nickname “the pharaoh.”

Even so, Washington had wanted him to do more to reform the body and Congress would not pay the more than $1 billion in back dues the country owed while he remained at the helm.

Many diplomats suggested he was jettisoned by U.S. President Bill Clinton’s Democratic administration during an election year to pre-empt criticism from Republicans deeply hostile to Boutros-Ghali and the United Nations.

In 1996, 10 Security Council members led by African states sponsored a resolution backing him for a second five-year term but the United States vetoed Boutros-Ghali when his reappointment came up for a vote.

In his 1999 memoir “Unvanquished: a U.S.-U.N. Saga,” Boutros-Ghali cataloged his frictions with a Clinton administration that he characterized as meddlesome, ill-informed and lacking in follow-through on U.N. resolutions.

Before the United Nations, Boutros-Ghali, whose grandfather was Egypt’s prime minister until his assassination in 1910, had worked in the administrations of Egyptian presidents Anwar Sadat and Hosni Mubarak.

He accompanied Sadat on the historic 1977 visit to Jerusalem and played a prominent role in the subsequent Camp David accords on the Middle East.

In the U.N. job, Boutros-Ghali was criticized for its failure to act during the 1994 Rwandan genocide and for not pushing hard enough for U.N. intervention to end Angola’s civil war, which at the time was one of the longest-running conflicts in the world.

Boutros-Ghali was jeered in Sarajevo, Mogadishu and Addis Ababa. His style was to wade into crowds and confront protesters when security guards permitted. “I am used to fundamentalists in Egypt arguing with me,” he told Reuters.

He shocked many in Sarajevo when he said he was not trying to belittle the horrors in Bosnia but that there were other countries where the “total dead was greater than here.”

He told Somali warlords and clan leaders to stop accusing the United Nations and him of colonialism, adding that Somalis should be worried that former colonial powers would ignore their plight if they continued to fight.

“The Cold War is finished,” he said. “Nobody is interested in the poor countries in Africa or anywhere in the world. They can easily forget Somalia in 24 hours.”

Boutros-Ghali headed the United Nations as the body was redefining itself and taking on more international peacekeeping work – operations that often were criticized for doing too much or too little.

Boutros-Ghali later served as secretary-general of the Organisation Internationale de la Francophonie, an organization of French-speaking nations, and as director of the Egyptian National Council for Human Rights.

He was passionate about the works of French painter Henri Matisse, whom he knew when he studied in Paris, smoked an occasional cigar and drank Scotch with water – a taste he said he acquired “after 70 years of British occupation” of Egypt.

Reporting by Michelle Nichols, Lin Noueihed in Cairo and David Cutler in London; Editing by Bill Trott and Howard Goller