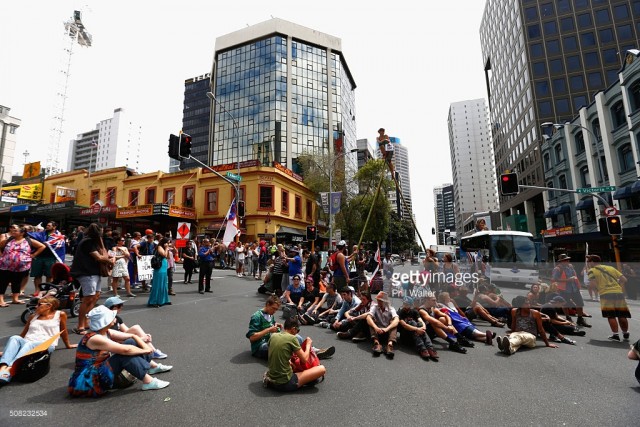 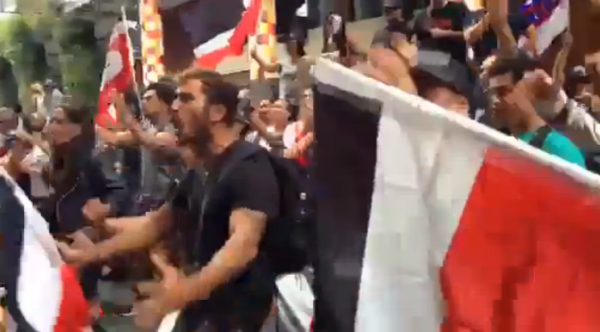 4 Feb 2016 – A contingent of protesters numbering around 1000 gathered at Aotea Square early this morning before marching to the Centre on Federal Street and confronting police with chanted slogans and hakas.

The group then split up, blockading several major intersections in central Auckland with sit-ins. Organisers had been told to act peacefully and not to resist arrest.

Their aim was to disrupt the area around SkyCity to prevent officials at the signing ceremony from leaving.

One group, including veteran activist Sue Bradford, managed to temporarily block access to the Harbour Bridge, though it has since re-opened. Other groups of protesters blocked on- and off-ramps to the southern and northwestern motorways. More people occupied intersections on Wellesley Street and Hobson Street. Police forcibly removed protesters from the Cook St off ramp. Pictures show police clashing with protesters, using force to remove them from roads.

Danielle was amongst the many motorists held up by the marches and blockades for “about thirty-five minutes”.

“At least we’ve got amusement sitting here,” she said.

Catherine, a protester back at Federal Street, says she’s following the New Zealand tradition of punching above its weight when it comes to change – for example on women’s suffrage, apartheid, and nuclear power.

“This is another time when we should be calling on New Zealanders to say ‘Hey if you want a New Zealand that you would love your kids and your grand-kids to grow up in, that protects the environment, have access to affordable healthcare, not have your tax dollars haemorrhaged away because corporates sue us’…maybe it’s time you made a bit of a noise about it,” she said.

Bevan, a protester too, said he doesn’t believe the agreement will be good for New Zealand’s future. “I feel that [the TPP deal] could be quite detrimental to our future generations and the way a lot of the laws will have to be changed to fit,” he said. Another protester said: “Our government hasn’t been listening to us, it hasn’t been representing the people like it should be.” “When that happens, we have to take action, and the action is to peacefully protest where they can see us.” After the deal was signed around midday, thousands of people arrived at Aotea Square once again and began marching down Queen Street. Some witnesses estimated the total number of marchers reached 10,000.

Protesters have moved to Queen St, photos via our man on the scene @andrewdickens2 #tpp pic.twitter.com/FsS84kG2MX

Queen Street is four lanes wide, and the protesters reached between five and six blocks long.

A coffin symbolizing democracy has been walked into the CCC chamber by TPPA protestors pic.twitter.com/Ytc3Wc3sPa

The demonstrators have now packed out the public gallery at the council chamber, with overflow out of the door. Meanwhile in Wellington, around 1000 protesters rallied at the Cenotaph.

And a haka to close the Wgtn protest pic.twitter.com/KyqLtMvTPG

Inside the Sky City convention centre, Sir Harawira Gardiner led on the 11 visiting ministers, who were called into the room by Cherie Povey.

As well as signing, the ministers will talk about their respective ratification processes – each have two years to get the deal passed domestically before it comes into law.

After a karakia, Te Rangi said he was proud and privileged to be there representing his iwi.

McClay in turn thanked Ngati Whatua for their gracious welcome, as several groups would not take part because they oppose the trade deal.

He then welcomed the ministers for what he said was a “momentous occasions for all of our countries.”

UPDATED 2.51PM: Central Auckland has been paralysed by thousands of protesters expressing their feeling towards the ultra-controversial Trans Pacific Partnership deal.

The free trade agreement, between twelve countries including New Zealand, Australia, and the United States, was signed this afternoon at a ceremony at SkyCity’s Convention Centre. It has been described as one of the largest free trade deals in history.

Prime Minister John Key telling those gathered it’s a giant vote of optimism for both the economy and the New Zealand people.

“The TPP liberalises trade and consistent rules to make it easier to do business across the region,” he said.

One Response to “Protesters Force Auckland Standstill as TPP Is Signed”