This is the second in a two-part series examining the fight to control the Afghan drug trade. Read Part 1: Tasked with Combating Opium, Afghan Officials Profit from It.

16 Feb 2016 — Shortly after sunrise, an Afghan special operations helicopter descended on two vehicles racing through the empty deserts of southern Afghanistan, traversing what has become a superhighway for smugglers and insurgents.

Intelligence showed that the men were transporting a huge cache of drugs and weapons from Helmand Province to Nimruz Province, a hub for all things illegal and a way station on the global opium trail. Hovering above, the troops fired tracer rounds into the sandy earth beside the vehicles, which skidded to a stop. 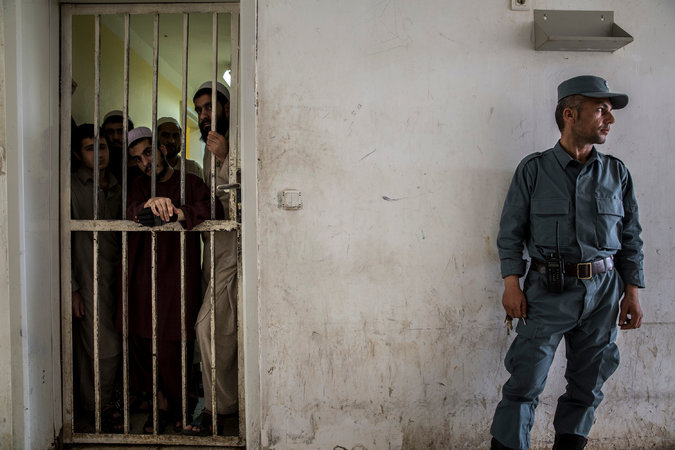 It was an impressive take for the Afghan forces that day, July 12, 2014. They seized nearly a metric ton of opium in various phases of processing, three AK-47 assault rifles, an automatic handgun, a PKM machine gun, a rocket-propelled grenade, hundreds of rounds of ammunition, four two-way radios and two satellite phones.

But the biggest coup was neither the drugs nor the weapons. It was a passenger who gave his name as Muhammad Eshaq, a 40-year-old carpet seller from Nimruz. After a later inquiry by international officials, the police discovered that Mr. Eshaq was actually Mullah Abdul Rashid Baluch, the Taliban shadow governor of Nimruz Province: a man with blood on his hands and with direct links to the top Taliban leaders in Pakistan.

In many respects, Mullah Rashid embodies the evolution of the Taliban movement in Afghanistan. As a hardened insurgent, most notorious for planning a mass suicide attack in Nimruz during the holy month of Ramadan, he had become among the most powerful drug smugglers in all of southern Afghanistan.

That he was picked up during a drug raid, not a counterterrorism operation, was a fitting end. He was, in the eyes of many, more of a criminal than an insurgent ideologue. Prosecutors brought him to the country’s elite drug court, and within four months, he was convicted and sentenced to 18 years in prison.

Mullah Rashid is just one of dozens of senior Taliban leaders who are so enmeshed in the drug trade that it has become difficult to distinguish the group from a dedicated drug cartel. While the Taliban have long profited from the taxation and protection of the drug trade in Afghanistan, insurgents are taking more direct roles and claiming spots higher up in the opium chain, according to interviews with dozens of Afghan and Western officials, as well as smugglers and members of the communities where they reside.

This includes high-level commanders, like Mullah Rashid, personally escorting large shipments. And it goes straight to the top: The new Taliban leader, Mullah Akhtar Muhammad Mansour, is at the pinnacle of a pyramid of tribal Ishaqzai drug traffickers and has amassed an immense personal fortune, according to United Nations monitors. That drug money changed the entire shape of the Taliban: With it, Mullah Mansour bought off influential dissenters when he claimed the supreme leadership over the summer, according to senior Taliban commanders.

In some areas of Afghanistan, the Taliban have provided seeds for farmers to grow opium on the insurgents’ behalf, or paid middlemen to purchase opium for them to store while they wait for prices to increase.

In its most recent monitoring report, the United Nations warned that the Taliban’s deeper drift into the drug business was bad news for the prospect of peace. “This trend has real consequences for peace and security in Afghanistan, as it encourages those within the Taliban movement who have the greatest economic incentives to oppose any meaningful process of reconciliation with the new government,” the authors wrote.

Some of the change in the nature of the Taliban movement can be attributed to the devastating military campaign to take out its leaders, leaving younger, more radical commanders on the battlefield. With competing conflicts diminishing some of the money from traditional donors in the Persian Gulf, the Taliban have been forced into greater self-reliance, cobbling money together from a variety of sources. Those sources include gem and lumber smuggling, but drug trafficking has become, by far, the Taliban’s most important and steady revenue source.

Mullah Rashid is one of the highest-ranking Taliban members to be directly implicated in drug smuggling in recent years. He owned homes in the notorious smuggling haven of Baramcha and controlled narcotics traffic through the open deserts in southern Helmand Province that connect Nimruz, Pakistan and Iran.

“He started as an idealist but became a professional smuggler,” said one top intelligence official in Nimruz Province, who has tracked Mullah Rashid for five years. “When he became the shadow governor, the trade became so lucrative, he could not give it up.”

According to government officials, Mullah Rashid was appointed to the governorship of Nimruz more than four years ago, after his predecessor was killed. He was a strategic pick for the Taliban, which hoped to benefit from his ethnicity as well as his experience. He is of Baluch descent, which made it easier for him to operate and recruit in the borderlands, where his tribesmen are prominent.

As an insurgent commander, his highest-profile acts were a series of suicide attacks in Zaranj in August 2012, which claimed the lives of nearly 30 people during Ramadan, officials familiar with his tenure said. He was also a key figure in coordinating contacts between the Taliban and Al Qaeda, setting up high-level meetings in Pakistan between the two groups.

But soon, his main focus became the drug business. Mullah Rashid consolidated his power in the smuggling zones of southern Afghanistan, a vast expanse of desert used for decades by smugglers hoping to evade detection. Knowledge of the routes and landscape, which has no formal maps or roadways, is the difference between life and death. The police, for the most part, are unable to patrol or secure this area outside of a few highly selective special operations missions.

Government and law enforcement officials familiar with Mullah Rashid said he had monitored and overseen a majority of drug smuggling through his area of influence. On July 12, 2014, he took a particularly active hand, personally joining a convoy transporting nearly a ton of opium, most of it in the cooked-down form that precedes heroin processing.

In the lead vehicle, a pickup truck, two men transported the drugs, along with some of the weaponry. One man involved, Noor Ahmad, was driving the shipment to pay off a $4,000 debt. Another was hoping to earn the $2,000 promised for such journeys, the authorities said.

In the tail car, a Toyota Corolla, four others traveled: a mixed bag of men, including a businessman, a farmer and another mullah in addition to Mullah Rashid, all trailing the main convoy by about 500 feet and carrying most of the weapons that were seized, according to court records. During questioning after their arrests, the men claimed that the weapons had been planted on them and that they had not been a part of any convoy.

Around 6:30 a.m., as the convoy was traveling through the Garmsir district, helicopters piloted by coalition forces appeared on the horizon. Special forces units from the Afghan police’s 444 division emerged and fired warning shots at the vehicles. The passengers in the last car fled but were quickly caught.

It was not until weeks later that the Afghan government came to find out, almost accidentally, that the man who had identified himself as Muhammad Eshaq was really Mullah Rashid.

According to the chief prosecutor of the criminal justice task force, Yar Mohammad Husseinkhel, British officials asked to speak with Mr. Eshaq, who was imprisoned at the time in Kabul.

Two Czech women had been kidnapped in the deserts of Baluchistan Province, Pakistan, and Western officials hoped that Mr. Eshaq might help. They knew at the time what the Afghan government in Kabul did not: that Mr. Eshaq was in fact the shadow governor of Nimruz, Mullah Rashid, an ethnic Baluch who they hoped might be able to share information or broker the women’s release.

Mr. Husseinkhel declined to say whether Mullah Rashid had provided information or helped in any way. But in the spring of 2015, more than two years after their abduction and about 10 months after officials sought Mullah Rashid’s help, the women were finally released. Mullah Rashid remains in the custody of Afghan officials.

After the women’s release, the United States Treasury Department designated Mullah Rashid a global terrorist — a year after his arrest.

A version of this article appears in print on February 17, 2016, on page A7 of the New York edition with the headline: Penetrating Every Stage of Afghan Opium Chain, Taliban Become a Cartel.