The Opium War – Tasked with Combating Opium, Afghan Officials Profit from It [Part 1)

This is the first in a two-part series examining the fight to control the Afghan drug trade. Read Part 2: Penetrating Every Stage of Afghan Opium Chain, Taliban Become a Cartel.

15 Feb 2016 — The United States spent more than $7 billion in the past 14 years to fight the runaway poppy production that has made Afghan opium the world’s biggest brand. Tens of billions more went to governance programs to stem corruption and train a credible police force. Countless more dollars and thousands of lives were lost on the main thrust of the war: to put the Afghan government in charge of district centers and to instill rule of law. 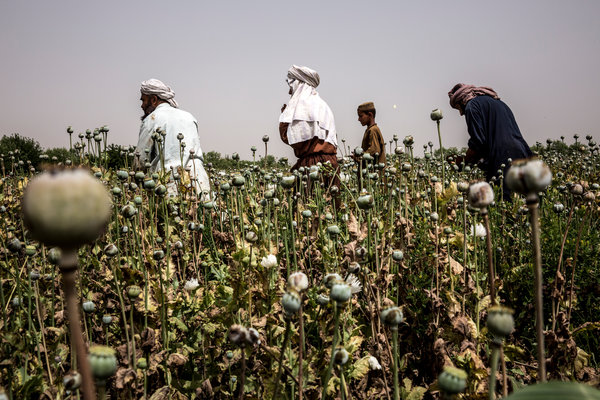 But here in one of the few corners of Helmand Province that is peaceful and in firm government control, the green stalks and swollen bulbs of opium were growing thick and high within eyeshot of official buildings during the past poppy season — signs of a local narco-state administered directly by government officials.

In the district of Garmsir, poppy cultivation not only is tolerated, but is a source of money that the local government depends on. Officials have imposed a tax on farmers practically identical to the one the Taliban use in places they control.

Some of the revenue is kicked up the chain, all the way to officials in Kabul, the capital, ensuring that the local authorities maintain support from higher-ups and keeping the opium growing. And Garmsir is just one example of official involvement in the drug trade.

Multiple visits to Afghan opium country over the past year, and extensive interviews with opium farmers, local elders, and Afghan and Western officials, laid bare the reality that even if the Western-backed government succeeds, the opium seems here to stay.

More than ever, Afghan government officials have become directly involved in the opium trade, expanding their competition with the Taliban beyond politics and into a struggle for control of the drug traffic and revenue. At the local level, the fight itself can often look like a turf war between drug gangs, even as American troops are being pulled back into the battle on the government’s behalf, particularly in Helmand, in southern Afghanistan.

“There are phases of government complicity, starting with accommodation of the farmers and then on to cooperation with them,” said David Mansfield, a researcher who conducted more than 15 years of fieldwork on Afghan opium. “The last is predation, where the government essentially takes over the business entirely.”

The huge boom in poppy production that began a dozen years ago was strongly identified with the new Taliban insurgency, as the means through which the militants bought their bullets, bombs and vehicles. In recent years, the insurgents have committed more and more working hours to every facet of the opium business. That fact was built into a mantra of Western officials in Afghanistan: When security improves, opium will be easier to take down.

That the Afghan government is now also competing in the opium business, in the absence of other reliable economic successes, has ramifications beyond the nation’s borders. Governments across the region are struggling with the health and security problems brought by the increased opium flow. And as the trade becomes more institutionalized in Afghanistan, it has undercut years of anticorruption efforts, perpetuating its status as a source of regional instability, crime and intrigue.

The administration of President Ashraf Ghani has made fighting corruption a central promise. A spokesman for his government, asked about official involvement in opium trafficking, including in Garmsir, insisted that there was “zero tolerance” for such behavior. “The president has been decisive in acting on information that indicates involvement of government officials in illegal acts, including taxation of opium,” said the spokesman, Sayed Zafar Hashemi.

But in Garmsir and other places in the Helmand opium belt, the system is firmly in place and remarkably consistent.

It relies on a network of village leaders and people employed by farmers to manage the water supply, men known as mirabs. These men survey the land under cultivation and collect money on behalf of officials, both in district-level government and in Kabul.

The connections run deeply into the national government, officials acknowledge privately. In some cases, the money is passed up to senators or assembly members with regional connections. In others, employees in the Independent Directorate of Local Governance, the agency that oversees provincial and district governments, pocket the payoffs, officials said. Some of the most important regional police and security commanders, including allies of American military and intelligence officials, are closely identified with the opium trade.

But the real money often stays local, with provincial and district officials. In the case of Garmsir, the district governor and police chief reaped the largest share of the rewards, according to local officials and farmers. The local police were also included in the profits.

Farmers said they paid about $40 for each acre of poppies under cultivation. In 2015, that meant nearly $3 million in payments from the district of Garmsir alone, according to officials familiar with the process. 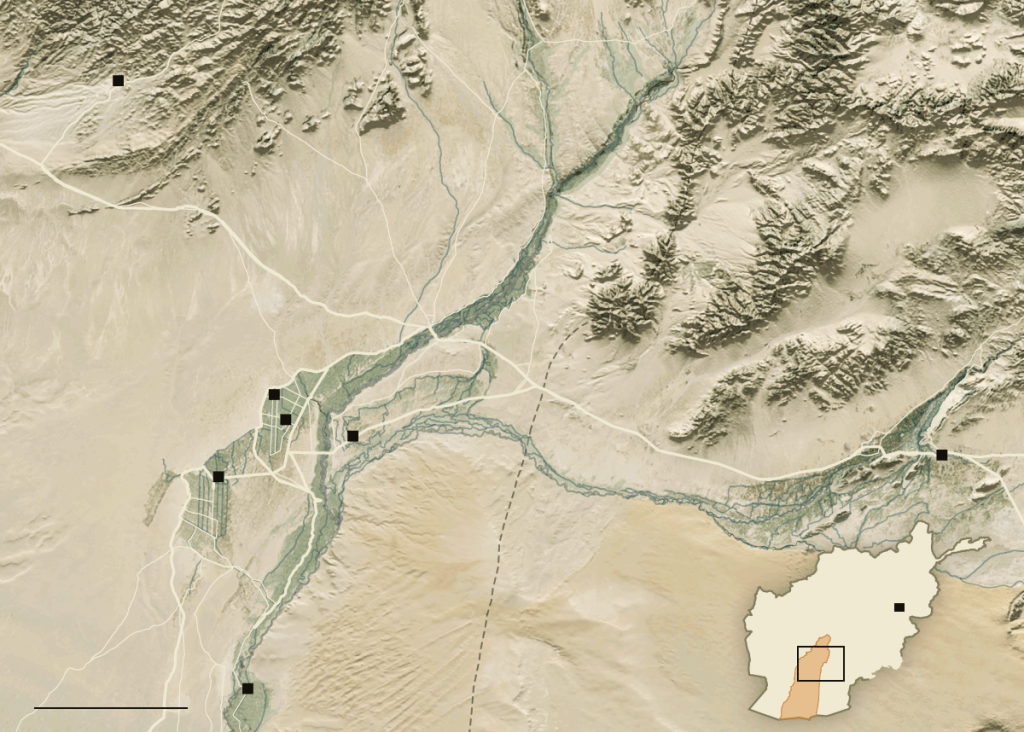 Garmsir is just one of several districts in Helmand Province, the heart of poppy country and the center of the 2010 American troop “surge,” where the government has built local opium alliances with farmers. The district of Marja has a system similar to the one in Garmsir, in which locals pay a flat rate based on how much poppy they grow, according to interviews with more than a dozen farmers and officials. In the district of Nad Ali, the same conditions exist to a lesser extent.

That the Taliban have closed in on some of those districts in recent weeks will mean little to the local growers. They paid their tax to the insurgents before the American troop surge and to the government after it. They will adjust again.

And the money to be made is only increasing. Already, experts say, satellite imagery from the past growing season across southern Helmand showed that opium cultivation was occurring openly within sight of military and police bases.

“Over the years, I have seen the central government, the local government and the foreigners all talk very seriously about poppy,” said Hakim Angar, a former two-time police chief of Helmand Province. “In practice, they do nothing, and behind the scenes, the government makes secret deals to enrich themselves.”

By the most basic metric, the international effort to curb poppy production in Afghanistan has failed. More opium was cultivated in 2014, the last year of the NATO combat mission, than in any other year since the United Nations began keeping records in 2002.

If there was a bright spot in 2015, it was that a poppy fungus or weevil reduced the harvest by as much as half in some places. But the lower production is likely to mean even more desperate attempts to increase cultivation next year, if the past is any guide.

Highlighting the efficiency of the government poppy tax, officials in Marja decided this year to halve it from the year before — precisely the proportion of the harvest that the fungus blighted.

“In the case of the opium trade, they try harder,” said one counternarcotics law enforcement official in southern Afghanistan. “There’s just too much money to ignore it.” 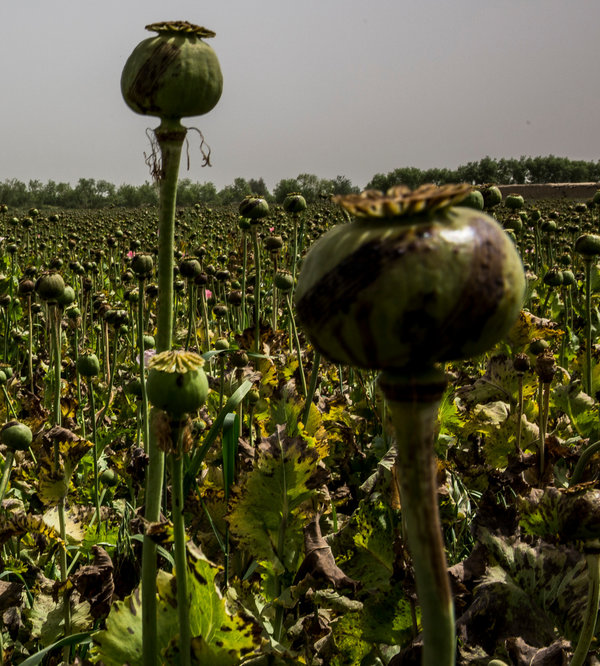 Opium poppies in Garmsir, a district of Helmand Province.
Bryan Denton for The New York Times

Government complicity in the opium trade is not new. Power brokers, often working for the government, have long operated behind the scenes, producing, refining and smuggling opium or heroin across one of the many porous borders of Afghanistan. That kind of corruption has been seen nationwide.

Taxation on a districtwide level in the main opium-growing centers, however, has been less common. Most who spoke about it did so on the condition of anonymity, fearing reprisals. Those who spoke openly tended to have enough resources to deter official blowback.

“Of course it happens here,” said a local police commander in Marja, Baz Gul, who oversees a few dozen men and was one of the residents who first took up arms against the Taliban. “But the police chief, the local police commander, they don’t take the money directly. They do it through influential figures.”

As it happens, Marja — one of the most violent districts during the 2010 troop surge, and the site of pitched battles recently between the Taliban and Afghan forces backed by American Special Operations troops — is a case study in opium economics.

One elder in Marja, who collects money from villagers who cultivate poppy in his block of 44 acres, said poppy was simply too alluring to ignore. Even with the tax, even with the blight, opium outstripped the next most lucrative crop by a ratio of more than three to one.

“Most other crops would have earned about $20,000 for 44 acres,” said the elder, seated in the home of another tribal elder in Marja. A dozen men arrayed in the room nodded quietly at his accounting.

The district of Nad Ali, a short drive from the provincial capital, Lashkar Gah, appears less organized than Garmsir or Marja. In April, on a drive through open farmland in government-controlled areas, much of the poppy crop had been plowed through because of an early harvest or because the plants were so disease-ridden that the farmers saw no point in keeping them standing.

Farmers in Nad Ali said tax collection depended on a number of factors, including one’s relationship with the local police commander, proximity to the district center and how badly crops were hurt by disease. In some cases, the teams sent by the government to eradicate crops collected the funds. In others, it was the local or national police.

Payments ranged from about $90 to $100 for every acre, according to six farmers.

“All of our poppies were disease-affected,” said one farmer in the Loy Bagh area of Nad Ali. “What people paid depended on how much they cultivated and how much was destroyed by the disease.”

The system in Garmsir, however, appears to leave little to chance. The district, farther from the provincial capital than Marja or Nad Ali, enjoys more autonomy than most under government control.

Interviews conducted in mid-March, before the blight appeared, showed a system of accommodation that was settling in comfortably. While farmers were not happy about paying the government, most saw it as inevitable and noted that the profit margin for opium was still considerably better than for wheat or cotton.

“We understand that the officials will charge us money,” said Juma Khan, a 35-year-old farmer in Garmsir, shrugging.

The system ran into turbulence in the spring, when two members of Parliament caught wind of the arrangement. After their demand for a cut of the profits was rebuffed, they went public, according to Afghan officials familiar with the case.

Officials in Kabul quickly fired the district governor, police chief and intelligence director, who were accused of dividing the profits. In a small ceremony, the Helmand deputy governor returned wads of cash to cheering farmers outside the provincial governor’s offices and promised to crack down on such exploitation.

Officials said that all of the money had been returned to farmers and that the responsible parties had been removed from power. But neither promise was entirely true.

The governor of Garmsir — who, in an interview, denied that he had created or collected any tax — was quietly moved to Washir, a neighboring district. Months later, he was moved back to Garmsir, where he has returned to his old job. Government officials in Kabul said he had been cleared of wrongdoing after a thorough investigation.

A later visit to Garmsir unearthed a second inconsistency: Farmers said they had received only half of their money back. Still, that was something of a rebate. After all, they had lost nearly half of their crop to blight.