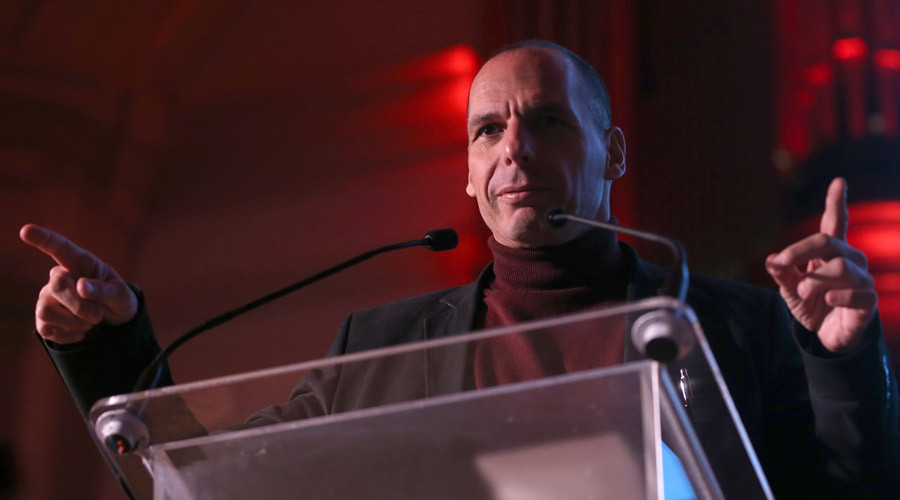 31 Jan 2016 – The former finance minister of Greece says people must work to save democracy from capitalism, otherwise the voracious economic system will completely devour the fragile political philosophy, he warned in a recent talk.

I was in attendance at a conference in Beirut last year when it was reported that Syriza, the left-wing Greek party, originally founded in 2004, had just done the impossible—or at least what we all thought was impossible. There was talk about ending austerity measures and Greece leaving the Eurozone: Grexit. Surely, a people’s victory in the US was just around the bend?

At that moment, I felt hope that Athens would lead Europe and finally the United States in a people-focused policy that rejected neoliberalism and the nostrums of banksters. Indeed, after Syriza surged in Greece, Podemos made its appearance in Spain; Jeremy Corbyn won the nod for leader of the UK Labour Party; a leftist governing coalition was voted into power in Portugal. Suddenly, it seemed that the people finally had austerity on the run. The events in Europe gave me hope for a resurgence of progressive politicians in the US.

And then the unthinkable occurred: Syriza dashed my hopes when they sat down at the negotiating table with Germany and the banksters to ease terms on the repayment of Greece’s debts to the EU. Yes, after the Greek people had voted Syriza into power, and then voted a resounding “No” to austerity policies in a referendum, Syriza was now at the bargaining table, agreeing to their demands. I couldn’t believe what I was witnessing: A real-time betrayal of its own values as well as the people by a political party created to be anti-austerity.

I asked those around me, “What part of ‘n-o’ don’t they understand?” Confused and disappointed, I reached out to my favorite experts on these matters, Michael Hudson and Ellen Brown, and they comforted me with the opinion that my instincts were right on the money: Syriza did not have to take the course of austerity that it had chosen.

The year 2015 started with hope as a result of the Syriza victory; it ended with the betrayed Greeks throwing firebombs to protest EU-imposed pension reform while Syriza privatized fourteen airports and sold them to the Germans as part of the bailout scheme.

Meanwhile, internally, Syriza was coming apart over the deal; the angst that I felt as an outsider was also shared by some inside the party. Eventually some members left the party and the government. One of those who left was Yaris Varoufakas, who is still fighting for a more equitable economic system, which will ultimately destroy capitalism if things continue the way they are, he has warned.

In a December TED Talk in Geneva (Capitalism will eat democracy — unless we speak up), Yaroufakas asked the audience to imagine two very high piles of money, one representative of debt and the other of idle cash stashed away by the wealthy. He said that there is approximately $5 trillion dollars sitting around doing absolutely nothing to invigorate the economies of the US the UK and the Eurozone; stagnant wages, unemployment, low aggregate demand, increased pessimism are the end result. He says that this is his main complaint about capitalism.

According to Varoufakis, all of the idle cash sloshing around should be invested into people and the things people need to make the economy grow and enhance their well-being. Investments in technology today can protect the Earth today and tomorrow.

However, the former finance minister did not limit his talk to discussions about the economy. He also waded into the murky depths of politics, where he issued a wake-up call to democracy.

“Capitalism will eat democracy unless the people speak up,” he warned.

Humbled by the long queue of friends who came to hear me in Barcelona last night. Thanks Barcelona! https://t.co/Y4jz4jAtTn

For example, Marco Rubio has Norman Braman as his closest and most important backer. Hillary Clinton has Haim Saban as one of her top donors; Sheldon Adelson, the billionaire powerhouse who kept Newt Gingrich’s presidential aspirations alive long after they were comatose, is still trying to decide which candidate he will back in the Republican primary.

At the same time, billionaire Donald Trump is self-financing his Presidential bid and intimates of former New York Mayor Michael Bloomberg leaked that he is willing to spend one billion dollars in his still-to-be-announced independent presidential run. This is the kind of relationship about which Varoufakis is speaking. He says that the economic sphere has been cannibalizing the political sphere to such an extent that it is even now undermining itself.

“Capitalism is like a population of predators that are so successful at decimating the prey that they must feed on, that in the end they starve,” Varoufakis said during his TED Global talk. “Similarly, the economic sphere has been colonizing and cannibalizing the political sphere to such an extent that it is undermining itself, causing economic crisis.”

He concludes that the more capitalism succeeds in taking the demos out of democracy the more inequality will rise and the economy will collapse.

His solution? Put the demos back into democracy and reunite the economic and political spheres with the political sphere in charge. In this space, I have called for the transformation of our economy to align more with our values. I have asked the people to dream again and imagine a better political system that actually solves the problems that confront us all today. I am working now for the elimination of the right versus left paradigm and for all of us to try to wrap our heads around a right versus wrong, values-based way of assessing public policy positions today.

In other words, ask: “Is it right for US policy to still be the greatest purveyor of violence on the planet today, as Dr. King characterized it in the 1960s?” And if we can agree that the answer is “No,” then what can we do together to change that? I am willing to work with anyone who wants to change the violence profile of the United States—to the rest of the world and also at home. And therefore, I’m still hoping that Varoufakis’s voice, combined with that of the other leftist parties now governing key countries in Europe, will inspire the people of the US to believe in themselves once again and the better, more peaceful future that we can create—together.

Varoufakis has unleashed a warning; I hope many will heed his call.

After serving in the Georgia Legislature, in 1992, Cynthia McKinney won a seat in the US House of Representatives. She was the first African-American woman from Georgia in the US Congress. In 2005, McKinney was a vocal critic of the government’s response to Hurricane Katrina and was the first member of Congress to file articles of impeachment against George W. Bush. In 2008, Cynthia McKinney won the Green Party nomination for the US presidency.