Why Is Trauma Missing from Syria Refugee Debate?

26 Jan 2016 – The 12 million Syrian refugees may differ regarding the reasons why they had to flee their homes and country in the last five years. Yet, they are united in their plight and in the collective trauma of the violent dislocation they have all experienced. Half of those refugees are estimated to be children, which complicates the psychological toll suffered by the Syrian people since their uprising-turned war took place.

According to a German study released in late 2015, half of the Syrian refugees who made it to Germany are suffering from trauma that has already produced psychological distress and mental illness.

The president of the Chamber of Psychotherapists, which carried out the research, said that more than 70 per cent of the refugees had witnessed violence and more than 50 per cent were themselves victims of violence. Nearly half of them have nightmares and flashbacks as if their terrible ordeals “were happening all over again”.

These details indicate the short-term effects of such trauma, however, what would take years to verify is the long-term impact of such massive distress and the shattering of the sense of identity which once united the Syrian people. 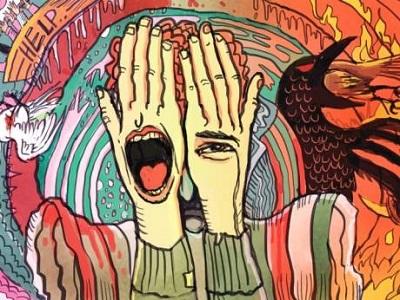 Before the war, Syrians, despite their sectarian, religious or even political backgrounds, saw themselves as part of the same modern national identity. However, the war redefined that identity based on the whims of several actors — the regional and international war parties — and the re-writing of Syria’s history by various powers that now share control of large swathes of that country. One of these powers is Daesh (the self-proclaimed Islamic State of Iraq and the Levant).

Daesh has relentlessly worked to redefine the Syrian identity by using extreme interpretations of religious texts in its imposed school curricula. Others did the same, by resorting to other frames of reference which, either way, is breaking the sense of national identity of the Syrian people into provisional fragments. While many are focused on who controls what in terms of Syria’s physical landscape, few seem to be taking the matter of the fragmentation of the national identity seriously.

Apart from these concerns, there is the issue of six million children, many of whom are being raised in other countries, and are learning alternative languages, cultures and other value-systems in order to survive. The impact of that alone shall prove consequential in how the Syrian people are redefined in the future.

Palestinian exile is particularly important for Syrians. Its trials and valuable lessons can shed light on the issue of collective identity for a nation that has subsisted for the most part in exile for nearly seven decades.

Ebrahim Mahmoud is a 77-year-old man who lives with his family, which includes 11 children, in the Baharka Refugee Camp in Iraq’s northern Kurdish region.

During his lifetime, he became a refugee twice: Once, when he was nine years old living in Haifa, Palestine, and a second, more recent exile in Mosul, Iraq. Just weeks before Israel declared its independence in 1948, Ebrahim lost his homeland and fled Haifa, along with tens of thousands of Palestinian Muslims and Christians after Israeli militias conquered the city in a military operation they called Bi’ur Hametz, or ‘Passover Cleaning’.

Throughout Palestine, over 750,000 Palestinians were expelled or fled the horrors of the militia-instigated war. Those who are still alive, along with their descendants, number more than five million refugees. When Daesh militias swept into Mosul, Iraq, in June 2014, Ebrahim plotted his flight, along with his entire family. Between 1948 and 2014, life was anything but kind to them. At first, they sold falafel, and Ebrahim’s children left school to join the work force at a young age. They all had cards that identified them as ‘Palestinian refugees’, and they have never known any other identity.

When the Americans invaded Iraq in 2003, they granted their soldiers and the Shiite-militias a free hand in that country. The once relatively thriving and peaceful Palestinian community of refugees in Iraq was shattered. Now, according to the United Nations Refugees Agency, no more than 3,000 Palestinian refugees are still living in Iraq, many of them in refugee camps.

Ebrahim has finally managed to escape Mosul and is living in a dirty and crowded refugee camp within Kurdish-controlled territories in the north. Considering his old age and faltering health, his story could possibly end there, but certainly not that of his children and grandchildren.

Ebrahim’s tragedy is not unique within the overall Middle East refugee crisis. It is in fact being lived and experienced by millions of Syrians. Nonetheless, if seen within its painfully protracted historical context, Palestinian exile is almost unprecedented in its complexity and duration. Few other refugee populations have struggled with exile and were defined by it, one generation after the other, as Palestinians have.

When refugees were expelled from their land in 1947-48, exile then was first seen as a political crisis that could only be remedied with the return of refugees, as instructed in United Nations Resolution 194. When that possibility grew dim, other resolutions followed, all expressing the political contexts of each era: in 1950, 74, 82, 83, etc.

Regardless of the nature of the discussion pertaining to Palestinian refugees — whether legal, political or moral — the refugees themselves were rarely consulted, except as subjects of selective and sometimes dehumanising poll questions, drawing their conclusion from refugees selecting “Yes” or “No”, or checking a box or two in a poll.

For Israel, the key concern is for the Palestinians to simply disconnect from their historic homeland; for refugee advocates the struggle has always been to demonstrate that the refugees’ desire to return remains as strong today as it was nearly 68 years ago.

But between Israeli laws aimed at punishing Palestinians for commemorating their Nakba, and efforts to keep the Right of Return central to the debate, an actual disconnect happened between the likes of Ebrahim Mahmoud of Haifa/Mosul, along with millions like him and the rest of us.

For Ebrahim, as is the case for Palestinian refugees in Syria, Lebanon, Iraq and in Palestine itself across the region and the world, the matter of exile is neither a political nor a legal point. It is an everyday reality that has left numerous scars and manifestations on the refugees’ identities as people, their perception of themselves, of their surroundings, of ‘home’, their internalisation of the past, their understanding of the present and their aspirations for the future.

It is an ongoing story, a journey that ended neither at a psychological nor practical ones. Those who were expelled from Safad, Palestine, in 1948, for example, fled Jordan in 1970, then Lebanon in 1982 and, finally, Yarmouk, Syria in 2012. They are a testament to the fact that, unlike common wisdom, exile for Palestinians is not specific in time or space, but a cyclical process that is experienced by every single Palestinian, even those who would declare that they have no intentions of returning to Palestine.

The repercussions of this trauma is likely to carry on for generations. Even when a just solution is reached, it will take time for the trauma to transform into an exclusively historical topic of discussion.

Syrian refugees are now taking the first step towards their own journey of exile. While one hopes that their collective trauma ends much sooner, it is important that discussions reach far beyond a question of humanitarian and political crises. While political disputes eventually conclude, collective traumas do not magically end with the signing of political agreements.

Dr. Ramzy Baroud has been writing about the Middle East for over 20 years. He is an internationally-syndicated columnist, a media consultant, an author of several books and the founder of PalestineChronicle.com. His books include Searching Jenin, The Second Palestinian Intifada and his latest My Father Was a Freedom Fighter: Gaza’s Untold Story. His website is: www.ramzybaroud.net.