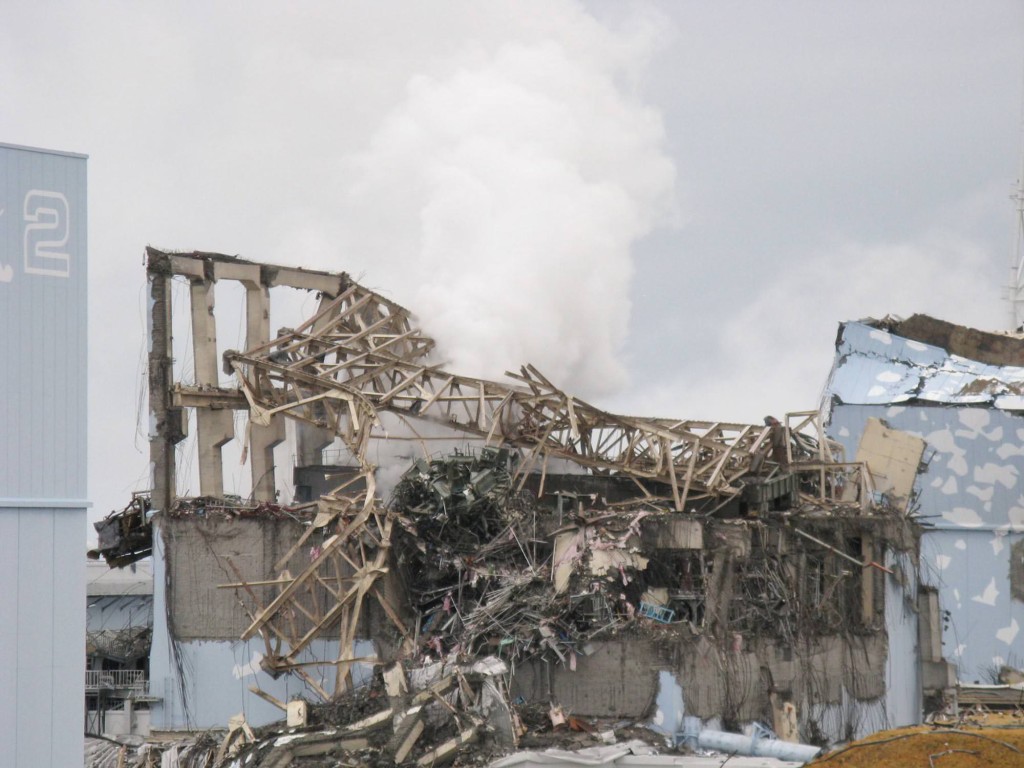 Photo: White smoke spews out from the No. 3 reactor building at the Fukushima No. 1 nuclear power plant on March 15, 2011, the day after the building exploded. (Provided by Tokyo Electric Power Co.)

21 Mar 2016 – The cocksure pro-nuclear crowd has trumpeted Fukushima as an example of Mother Nature taking lives because of an earthquake and tsunami; whereas, the power plant accident proves nuclear power can withstand the worst without unnecessary death and illness. All of the deaths (16,000) were the fault of Mother Nature, not radiation.

After all, it’s only one year ago that science journalist George Johnson’s article, “When Radiation Isn’t the Real Risk,” appeared in the New York Times, September 21, 2015: “This spring, four years after the nuclear accident at Fukushima, a small group of scientists met in Tokyo to evaluate the deadly aftermath.”

“No one has been killed or sickened by the radiation — a point confirmed last month by the International Atomic Energy Agency. Even among Fukushima workers, the number of additional cancer cases in coming years is expected to be so low as to be undetectable, a blip impossible to discern against the statistical background noise (Johnson).” A statement worth remembering.

The article goes on to say: “But about 1,600 people died from the stress of the evacuation— one that some scientists believe was not justified by the relatively moderate radiation levels at the Japanese nuclear plant (Johnson).” Oh, please, I am gagging here!

But people in the streets and on the ground in Japan tell a different story about the risks of radiation. They talk about illnesses and death. Maybe radiation illnesses and deaths are relegated to “behind the curtain” cover-ups because when one looks behind the curtain, an image of death and rampant illness is revealed, thus exposing the failure of a nation to come to grips with the brutal truth.

“Today, the radiation at the Fukushima plant is still so powerful it has proven impossible to get into its bowels to find and remove the extremely dangerous blobs of melted fuel rods, weighing hundreds of tonnes. Five robots sent into the reactors have failed to return.”1 It’s killing robots!

“It is extremely difficult to access the inside of the nuclear plant,” Naohiro Masuda, TEPCO’s Head of Decommissioning said in an interview. “The biggest obstacle is the radiation.”2

But, the referenced NYT article claims: “…people died from the stress of the evacuation— one that some scientists believe was not justified by the relatively moderate radiation levels at the Japanese nuclear plant.”

Somebody is confused. Either TEPCO’s Head of Decommissioning or the NYT article is wrong. They cannot both be correct — impossible.

As far as that goes, TEPCO itself has reported few radiation illnesses and no radiation-caused deaths, but suppose it’s not their responsibility in the first instance, as layers of contractors and subcontractors employ workers to clean up the toxic mess. If “subcontractor workers die” from radiation exposure, so what?

According to sources in Japan, death is in the air, to wit:

The ashes of half a dozen unidentified laborers ended up at a Buddhist temple in this town just north of the crippled Fukushima nuclear plant. Some of the dead men had no papers, others left no emergency contacts. Their names could not be confirmed and no family members had been tracked down to claim their remains.

The men were among the 26,000 workers — many in their 50s and 60s from the margins of society with no special skills or close family ties — tasked with removing the contaminated topsoil and stuffing it into tens of thousands of black bags lining the fields and roads. They wipe off roofs, clean out gutters and chop down trees in a seemingly endless routine… Coming from across Japan to do a dirty, risky and undesirable job, the workers make up the very bottom of the nation’s murky, caste-like subcontractor system long criticized for labor violations.3

Here is part of an interview with Katsutaka Idogawa, former mayor of Futaba (Fukushima Prefecture).5 (This was reported prior to the aforementioned NYT George Johnson article):

SS: The United Nations report on the radiation fallout from Fukushima says no radiation-related deaths or acute diseases have been observed among the workers and general public exposed – so it’s not that dangerous after all? Or is there not enough information available to make proper assessments? What do you think?

KI: This report is completely false. The report was made by a representative of Japan – Professor Hayano. Representing Japan, he lied to the whole world. When I was mayor, I knew many people who died from a heart attack, and then there were many people in Fukushima who died suddenly, even among young people. It’s a real shame that the authorities hide the truth from the whole world, from the UN. We need to admit that actually many people are dying. We are not allowed to say that, but TEPCO employees also are dying. But they keep mum about it.

I would like to talk about my interview of a nurse who used to work at the Fukushima Daiichi Nuclear Power Plant (NPP) after the accident… He quit his job with TEPCO in 2013, and that’s when I interviewed him… As of now, there are multiple NPP workers that have died, but only the ones who died on the job are reported publicly. Some of them have died suddenly while off work, for instance, during the weekend or in their sleep, but none of their deaths are reported.

Not only that, they are not included in the worker death count. For example, there are some workers who quit the job after a lot of radiation exposure… and end up dying a month later, but none of these deaths are either reported, or included in the death toll. This is the reality of the NPP workers (Oshidori).

During her interview, Ms. Oshidori commented:

There is one thing that really surprised me here in Europe. It’s the fact that people here think Japan is a very democratic and free country.

Among the plaintiffs is a sailor who was pregnant during the mission. Her baby was born with multiple genetic mutations.

The sailors participated in “Operation Tomodachi,” providing humanitarian relief after the March 11th, 2011 Fukushima disaster based upon assurances that radiation levels were okay. According to plaintiffs’ attorneys, more sailors are in the process of coming on board as the tempest of nuclear radiation’s latent effects finally erupts through the ranks (it can take several years for the “accumulation effect” of radiation to show up as cancer. Nevertheless, several U.S. sailors are already showing symptoms.)

“Bonner, and fellow attorney for the sailors Paul Garner, said additional plaintiffs are continuing to come forward with ‘serious ailments from radiation,’ according to a statement released by the legal team.” .

Hmm, it appears there is confusion within the ranks about the effects of radiation. Indeed, if radiation is killing, which it is according to multiple sources within Japan, then hiding the fact is insidiously disrespectful to Fukushima workers and Japanese citizens as well as hoodwinking the world community; it’s almost criminal. Sure, Tokyo is holding the Olympics in 2020, and the country needs to put its best foot forward, but don’t hide, conceal, avoid an extraordinarily toxic scenario from prospective Olympic attendees. That’s putting the worst foot forward.

To top it off (and this really stinks), the Abe administration enacted a laughable secrecy law that threatens 10-years prison time for “breathing the wrong way,” well not quite that severe but certainly in that spirit.

Still, when considering the risks of exporting toxic food, poisoning sea water, and spewing toxins into surrounding cities, villages, and countryside, and with people dropping dead, isn’t it incumbent upon the government to level with society about the risks of deathly radiation?

Robert Hunziker (MA, economic history, DePaul University) is a freelance writer and environmental journalist whose articles have been translated into foreign languages and appeared in over 50 journals, magazines, and sites worldwide. He can be contacted at: rlhunziker@gmail.com.