25 Mar 2016 – For days now, American cable news has broadcast non-stop coverage of the horrific attack in Brussels. Viewers repeatedly heard from witnesses and from the wounded. Video was shown in a loop of the terror and panic when the bombs exploded. Networks dispatched their TV stars to Brussels, where they remain. NPR profiled the lives of several of the airport victims. CNN showed a moving interview with a wounded, bandage-wrapped Mormon American teenager speaking from his Belgium hospital bed.

A little more than a week ago, as Mohammed Ali Kalfood reported in The Intercept, “Fighter jets from a Saudi-led [U.S. and U.K.-supported] coalition bombed a market in Mastaba, in Yemen’s northern province of Hajjah. The latest count indicates that about 120 people were killed, including more than 20 children, and 80 were wounded in the strikes.” Kalfood interviewed 21-year-old Yemeni Khaled Hassan Mohammadi, who said, “We saw airstrikes on a market last Ramadan, not far from here, but this attack was the deadliest.” Over the past several years, the U.S. has launched hideous civilian-slaughtering strikes in Yemen, Pakistan, Afghanistan, Syria, Somalia, Libya, and Iraq. Last July, The Intercept published a photo essay by Alex Potter of Yemeni victims of one of 2015’s deadliest Saudi-led, U.S.- and U.K.-armed strikes. 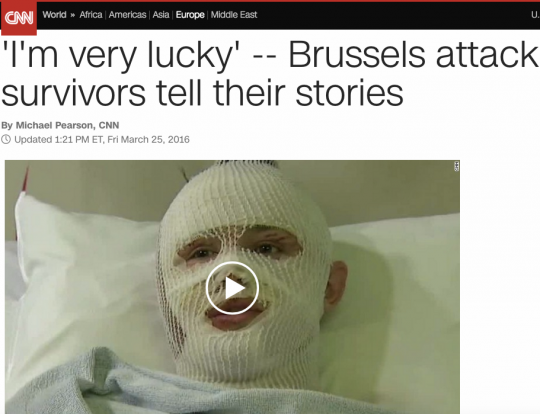 You’ll almost never hear any of those victims’ names on CNN, NPR, or most other large U.S. media outlets. No famous American TV correspondents will be sent to the places where those people have their lives ended by the bombs of the U.S. and its allies. At most, you’ll hear small, clinical news stories briefly and coldly describing what happened — usually accompanied by a justifying claim from U.S. officials, uncritically conveyed, about why the bombing was noble — but, even in those rare cases where such attacks are covered at all, everything will be avoided that would cause you to have any visceral or emotional connection to the victims. You’ll never know anything about them — not even their names, let alone hear about their extinguished life aspirations or hear from their grieving survivors — and will therefore have no ability to feel anything for them. As a result, their existence will barely register.

That’s by design. It’s because U.S. media outlets love to dramatize and endlessly highlight Western victims of violence, while rendering almost completely invisible the victims of their own side’s violence.

Perhaps you think there are good — or at least understandable — reasons to explain this discrepancy in coverage. Maybe you believe humans naturally pay more attention to, and empathize more with, the suffering of those they regard as more similar to them. Or you may want to argue that victims in cities commonly visited by American elites (Paris, Brussels, London, Madrid) are somehow more newsworthy than those in places rarely visited (Mastaba, in Yemen’s northern province of Hajjah). Or perhaps you’re sympathetic to the claim that it’s easier for CNN or NBC News to send on-air correspondents to glittery Western European capitals than to Waziristan or Kunduz. Undoubtedly, many believe that the West’s violence is morally superior because it only kills civilians by accident and not on purpose. 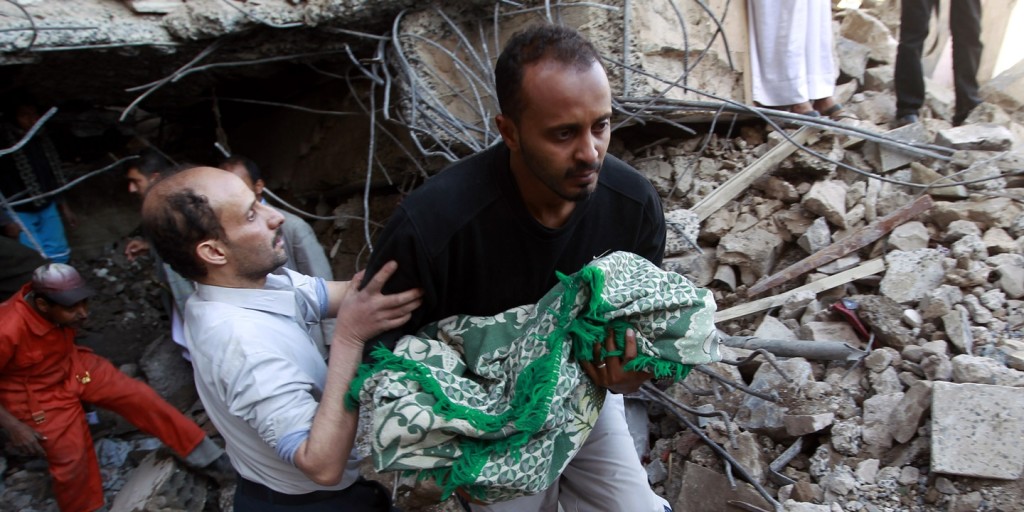 Yemeni rescuers carry the body of a baby girl who was retrieved from the rubble after a building was struck overnight by Saudi-led coalition airstrikes on Feb. 10, 2016, in the capital, Sanaa.

But regardless of the rationale for this media discrepancy, the distortive impact is the same: By endlessly focusing on and dramatizing Western victims of violence while ignoring the victims of the West’s own violence, the impression is continually bolstered that only They, but not We, engage in violence that kills innocent people. We are always the victims and never the perpetrators (and thus Good and Blameless); They are only the perpetrators and never the victims (and thus Villainous and Culpable). In April 2003, Ashleigh Banfield, then a rising war-correspondent star at MSNBC, returned from Iraq, gave a speech critiquing the one-sided, embedded U.S. media coverage of the war, and was shortly thereafter demoted and then fired. This is part of what she said:

That said, what didn’t you see? You didn’t see where those bullets landed. You didn’t see what happened when the mortar landed. A puff of smoke is not what a mortar looks like when it explodes, believe me. There are horrors that were completely left out of this war. … It was a glorious, wonderful picture that had a lot of people watching and a lot of advertisers excited about cable news. But it wasn’t journalism, because I’m not so sure that we in America are hesitant to do this again, to fight another war, because it looked like a glorious and courageous and so successful, terrific endeavor, and we got rid of horrible leader: We got rid of a dictator, we got rid of a monster, but we didn’t see what it took to do that. …

I think there were a lot of dissenting voices before this war about the horrors of war, but I’m very concerned about this three-week TV show and how it may have changed people’s opinions. It was very sanitized. … War is ugly and it’s dangerous, and in this world, the way we are discussed on the Arab street, it feeds and fuels their hatred and their desire to kill themselves to take out Americans.

In other words, the death, carnage, and destruction the U.S. invasion was causing was generating huge amounts of anti-American hatred and a desire to bring violence to Americans, even if meant sacrificing lives to accomplish that. But the U.S. media never showed any of that, so Americans had no idea it existed, and were thus incapable of understanding why people were eager to do violence to Americans. They therefore assumed that it must be because they are primitive or inherently hateful or driven by some inscrutable religious fervor.

That’s because the U.S. media, by showing only one side of the conflict, by presenting only the nationalistic viewpoint, propagandized — deceived — American viewers by making them more ignorant rather than more enlightened. As a result, when the trains of London and Madrid were attacked in 2004 and 2005 as retaliation for those countries’ participation in the invasion of Iraq, that causal connection (which even British intelligence acknowledged) was virtually never discussed because Western media outlets ensured it was unknown. The same was true of attempted attacks on the U.S.: in Times Square, the New York City subway system, an airliner over Detroit, all motivated by rage over Western violence. In the absence of any media discussion of those victims and motives, these attacks were was simply denounced as senseless, indiscriminate slaughter without any cause, and people were thus deprived of the ability to understand why they happened.

That’s exactly what’s happening still. Because I was traveling in the U.S. this week, I was subjected to literally dozens of hours of cable and network news coverage of the Brussels attacks. The most minute angles of the attack were dissected. But there was not one moment devoted to the question of why Belgium — and the U.S., France, and Russia before it — were targeted by ISIS (as opposed to a whole slew of non-Muslim, democratic countries around the world that ISIS doesn’t target), even though ISIS explicitly stated the reason and it is, in any event, self-evident: because those countries have been bombing ISIS in Syria and Iraq and these bombings were intended as retaliation and vengeance. Nor was there any discussion of why ISIS seems to have little trouble attracting support among some in Western countries: As even a Rumsfeld-commissioned study found in 2004, it is in large part because of widespread anger among Muslims over ongoing Western violence and interference in that part of the world.

The point, as always, isn’t justification: It is always morally unjustified to deliberately target civilians with violence (see the update here on that point). Nor does it prove that the bombing of ISIS in Iraq and Syria is unjustified or should cease. The point, instead, is that the war framework in which much of this violence takes place — one side that declares itself at war and uses violence as part of that war is inevitably attacked by the other side that it targets — is completely suppressed by one-sided media coverage that prefers a self-flattering, tribalistic cartoon narrative.

The ultimate media taboo is self-examination: the question of whether there are actions we take that exacerbate the problem we say we are trying to resolve. Such a process would not dilute the evil of ISIS’s civilian-targeting violence, but it would enable a more honest and complete understanding of the role Western governments’ policies play and the inevitable costs they entail. Perhaps those costs are worth enduring, but that question can only be rationally answered if the costs are openly discussed.

But whatever else is true, if we are constantly bombarded with images and stories and dramatic narratives highlighting our own side’s victims, while the victims of our side’s violence are rendered invisible, it’s only natural that large numbers of us will conclude that only They, but not We, are committing civilian-killing violence. That’s a really pleasing thing to believe, no matter how false it is. Having media outlets perpetrate self-pleasing and tribal-affirming — but utterly false — narratives is the very definition of propaganda. And that’s what largely drives Western media coverage of these terrorist attacks every time they occur in the West.