14 Mar 2016 – It was scheduled to start over a week ago. Then last Wednesday [9 Mar]. Now tomorrow . When round three of the Geneva peace talks on Syria begins, it could be Groundhog Day for Syrians. If the actors read from the script they used at the previous UN-sponsored negotiations – Geneva I in 2012 and Geneva II in 2014 – the last act will be the same: a failure. 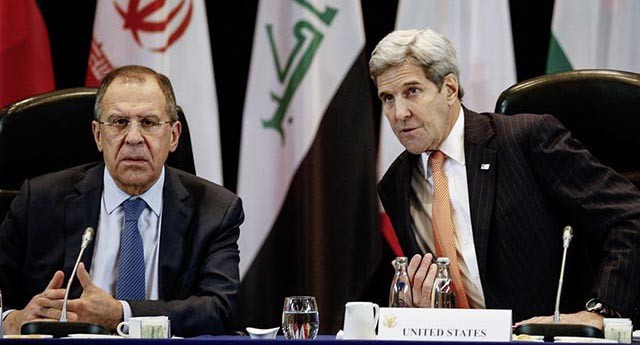 The conference, like the current ceasefire, which began on 27 February, is taking place because the United States and Russia want it to. At last they seem to agree that the stumbling block to the last two sessions – the fate of the Syrian president, Bashar al-Assad – is not important enough to prolong the war.

Both sides know that this US v Russia proxy war is out of control: Europe has been hit with a tide of refugees that threatens the EU’s fragile unity; and the conflict has spread to Iraq, and threatens to erupt in Lebanon and Jordan.

Early in the war, the Syrian combatants ceded decision-making to their financiers and armourers in Russia, Iran, the US, Turkey, Saudi Arabia and Qatar. If the war is to end, the powers that fuelled it must impose a solution in Geneva.

The war in Syria can be seen as an imperial card game that the US can leave while it has a few chips left. Once the conflict is over, someone will have to pay billions of dollars to rebuild the nation. Most probably it will be the winners, Russia and Iran – if they don’t cough up, they will lose in peace what they gained in war. Why would any sensible Washington policymaker object?

Russia, with its collaborators, is winning this phase of the war, so renewed negotiations will solidify its gains and allow the Syrian government to restore sovereignty over the entire country. Then, a combined onslaught by the Russians, Americans, Syrian army, Hezbollah, Kurds, non-jihadist Syrian rebels, Iran and Iraq will be able to remove Islamic State from Syria and Iraq.

Russia has stuck to its position from the beginning of the conflict in 2011: that Assad must remain in office. The US demanded that he went as a precondition to a settlement, but Russian credibility was at stake. Before the Arab League suspended Syria, in 2011, it had 22 member states, 21 of which were US clients. Russia had one Arab ally, which was not about to be abandoned.

So unless the US was willing to up its game by sending more planes, drones and troops – which would invite the Russians to raise theirs and risk a world war – it had to change tack. Secretary of State John Kerry did just that in December, when he said: “The US and our partners are not seeking so-called regime change.”

Before the second Geneva conference in 2014, Assad’s minister for national reconciliation, Ali Haider, declared: “Neither Geneva II, nor Geneva III nor Geneva X will solve the Syrian crisis. The solution has begun and will continue through the military triumph of the state.” Haider was wrong: the regime may be winning militarily now, but it cannot wage war for ever. Just as America’s proxy rebels failed to defeat the regime, the regime failed to defeat them. The only way out is compromise.

So the outside world should impose a settlement but not dictate the future of Syria. Proposals to divide it into sectarian cantons in a federal system are doomed. The French tried that in the 1920s, when they cut their Syrian Mandate territory into six separate statelets that its people rejected. Nor can outsiders decide who will lead the nation: such matters are for the Syrian people.

This does not mean the Kurds cannot enjoy some degree of autonomy, despite the objections of many Syrian Arabs and Turkey. Geneva III can impose a transitional arrangement in which the Syrians decide for themselves how they shall be governed and by whom, albeit with close international monitoring of elections. The regime refuses to share power during a transitional period with “terrorists”; the opposition demands that Assad goes before the transition begins. But if both sides cling to these positions, the US and Russia can compel them to change their minds. The Syrian people demand it.

The ceasefire of the past fortnight has allowed many of them to resume their lives. If Geneva III brings peace, they will not take long to rebuild a country they love and of which, despite the cruelty and crimes of this war, they are proud.

Charles Glass is an author, journalist, broadcaster and publisher.