Shooting Up: How War and Drugs Go Together

26 Mar 2016 – Of all the cultural narratives to emerge in the aftermath of American wars, few have proven as pervasive as the Soldier’s Disease. Popular lore holds that the Soldier’s Disease affected hundreds of thousands of Civil War veterans, Yankee and Confederate. A term so specific and vague all at once, the Soldier’s Disease sounds like something meant to conjure up millenniums’ worth of human destruction and violence. 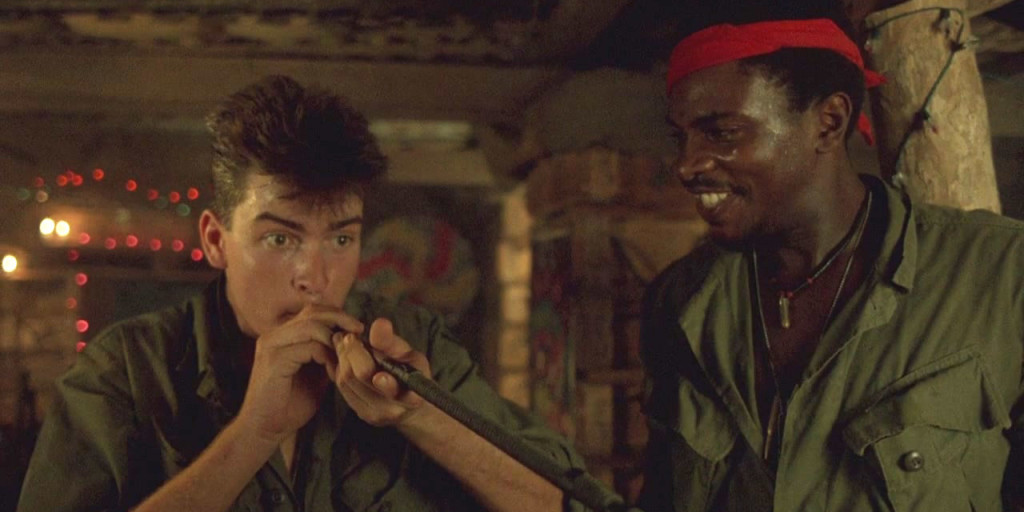 Scene from the movie Platoon (1986) with Charlie Sheen and Keith David.
Photo: MGM

Yet it was never that visceral, or all that physical. The Soldier’s Disease was code for addiction to morphine or other opiates. Given the industrial nature of the Civil War, and the state of medical treatment at the time, the source of the addiction developed from amputations caused by shrapnel wounds. Morphine and the like numbed the horrifying pain that came with the amputations and recovery process. That dependence became addiction, and returned home with the veterans after the war, unleashing a great scourge upon the land.

So goes the narrative, at least. There’s just one problem, though: The Soldier’s Disease is more myth than historical record. Modern studies reveal that sure, many a Civil War vet had their opiate issues, but so did a lot of Americans in that era, not the least because of a booming (and often unchecked) pharmaceutical industry. Further, the first chronicled use of “Soldier’s Disease” didn’t appear until 1915, a good 50 years after Appomattox. Why? There was a growing anti-drug political movement occurring across the nation, and it needed some talking points.

The hazy truths and distorted falsehoods of the Soldier’s Disease are among the case studies explored in Lukasz Kamienski’s absorbing and comprehensive Shooting Up: A Short History of Drugs and War, published this month by Oxford University Press. “As has been the case throughout the centuries,” Kamienski writes, “prescription and self-prescription of intoxicants remains intrinsic to military life.” He then goes on to show how combatants have used substances to alter reality, sometimes to augment their performance on the battlefield, sometimes to escape the consequences of the very same thing.

As Kamienski notes throughout his book, the war-as-drug metaphor is a well-worn trope in contemporary storytelling, both in collective mobilization and in individual souls. Drugs tend to serve as textual background, something to warp and distort the surreality of war (or war stories) in weed smoke and whiskey brain. Oliver Stone’s celebrated film Platoon uses this device to great effect — when Charlie Sheen’s Chris Taylor, a new arrival to Vietnam, enters the underworld tent and parties with the experienced soldiers, he (and we, as viewers) accept that as the norm for soldiers in ’Nam. The scene is not without justification: According to Shooting Up, nearly 70 percent of American service members reported using marijuana over the course of their tour, while 34 percent reported using heroin. Kamienski flips the dynamic at play here, bringing us into the underworlds of war.

From ancient Greeks’ use of poppy juice to the Napoleonic armies bringing hashish back to Europe from Egypt, Kamienski weaves an intricate if sometimes dry account. Hunter S. Thompson this isn’t, though one can hardly blame an academic book for reading accordingly. The Polish historian relies on the appeal of the subject itself to immerse readers in the work. Sometimes the drugs (and drinks) are stimulants for violence: the colonial British and their “Dutch courage” of rum, the Nazis’ pioneering use of amphetamines, the American pilots flying during the Cold War with their “pep pills” (better known nowadays as speed.) Others involve soldiers and veterans self-medicating, because their government’s prescriptions and remedies were deficient. And still others reveal the lengths to which governments and military leaders will go when seeking martial advantage, from the British powers that be slipping dashes of cocaine into their Tommies’ rum portions during World War I, to the beyond-fear, child soldiers high on drugs in Sierra Leone at the turn of the 21st century.

Some of the chapters involving modern conflicts, such as Iraq and Afghanistan, lack in the hard evidence of their predecessors, instead turning to pop culture references that have more in common with the wars of the past than they do with the wars they’re supposed to represent. This is understandable, given Kamienski’s historian pedigree and the comparative lack of vetted research on the wars in question. Still, when I read in Shooting Up that “in general, soldiers on missions in Afghanistan and Iraq drank both excessively and frequently,” I wondered what Iraq War I’d spent 15 months in. Did some soldiers and Marines strike up bargains for whiskey with townspeople, or have their spouses ship them tequila in empty shampoo bottles? Of course. But my Iraq, and the one of most of my peers, was as dry as a Baptist grandmother’s cabinet.

A chapter devoted to the legal and illegal energy drinks of Iraq — Rip Its, Wild Tigers, Boom-Booms and others — would have rung true. Patrolling Iraqi highways for 40 hours at a time hopped up on liquid nicotine may not be as flashy as stories of whiskey ragers in trenches or heroin binges in the jungle, but the short-term effects were just as interesting, and the long-term ones might prove so, as well.

That’s not to say excessive drinking didn’t occur in Iraq, sometimes with tragic and vile consequences. Kamienski mentions the horrific gang rape in 2006 of an Iraqi girl, and subsequent murders of her and her family, carried out by a small group of U.S. soldiers stationed near Mahmudiyah. The soldiers were drunk and likely high on some combination of codeine and painkillers. For Kamienski, that’s more than enough reason for why the war crime took place. But anyone who’s read Jim Frederick’s brilliant nonfiction account of Mahmudiyah, Black Hearts, knows there was much, much more involved. As the saga of the Soldier’s Disease reveals, the truth of the war-drug relationship is usually more complicated than the easy narrative intimates.

For Kamienski, drugs and war are intrinsically linked and always have been. Only the specifics of substance and application have changed over the decades and centuries. After all, as he mentions in Shooting Up, “Wouldn’t it actually be astonishing if the military had not reached for pharmacological support?”

Matt Gallagher, an Iraq War veteran, is the author of the novel Youngblood, published last month by Atria/Simon & Schuster.