Brazilian Democracy Thrown to the Dogs

Military coups are so Pinochet-era. It’s never enough to stress that what’s taking place in Brazil is advanced Hybrid War, a white coup/regime change operation organized by the Federal Public Ministry, corporate media (controlled by four families) and a significant part of Congress.

31 Mar 2016 – It took only 3 minutes for a bunch of lowly crooks – more known for excelling in corruption than competent administration – to (literally) throw young but vibrant Brazilian democracy to the dogs.

With no votes counted, so traitors would not be publicly identified, the centrist Brazilian Democratic Movement Party (Partido do Movimento Democrático Brasileiro or PMDB) in Brazil abandoned the coalition that supports President Dilma Rousseff in power in Brasilia, thus increasing the chances of a – Kafkaesque – impeachment drive against Rousseff being approved in April.

The PMDB is Brazil’s largest party – accounting for 69 out of 513 members of Parliament. In the short term, the party will be contributing for one of its own, current vice-president Michel Temer, 75, a not exactly brilliant constitutionalist lawyer, to ascend to the presidency until the next elections in 2018, thus fulfilling the white coup/regime change scenario dreamed about by the proponents of Hybrid War in Brazil and their lowly vassals.

The Brazilian Constitution allows for impeachment; but in Rousseff’s case, no undisputable «crime of responsibility» has been proven. The alleged accusations – centered on embezzling of public debt and fiscal mismanagement – are essentially bogus.

It gets worse; this undisguised white coup/regime change process will run in parallel to a dirty deal preventing the leader of the lower house in Brasilia, notorious crook Eduardo Cunha, from being thrown out of office for corruption. Cunha would simply «resign» – under the assumption that the new Temer administration would need to articulate a new majority in Parliament. 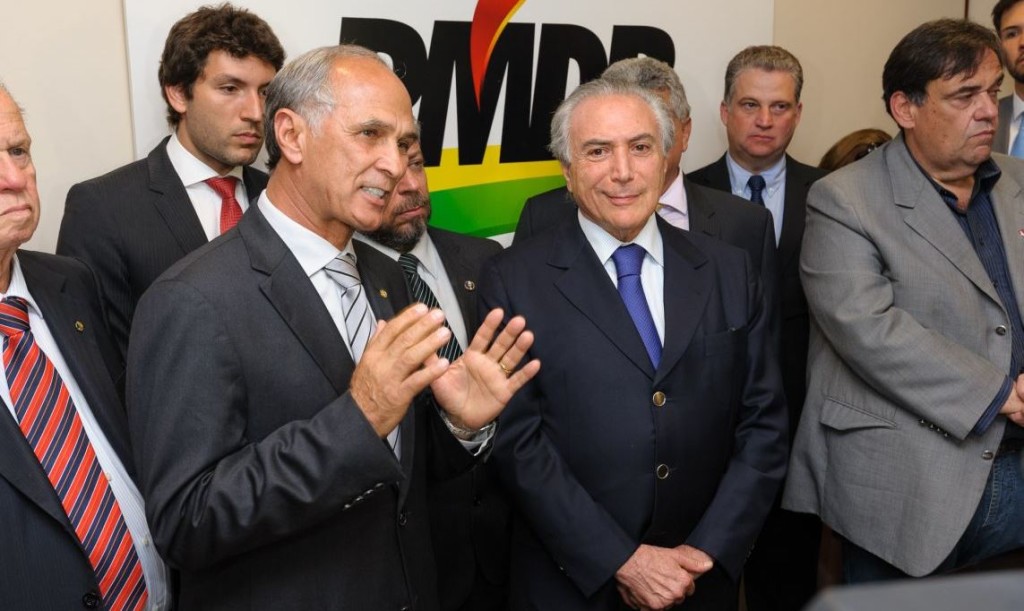 A jury of crooks

This new phase in Brazil’s massive, ongoing politico-economic crisis now privileges the right-wing opposition, bolstered by the PMDB gang, all geared up to snatch the necessary two-thirds majority (342 votes) to bring the accusations against Rousseff to the Senate.

What should be expected is a massive PSYOP for the next few weeks, where the vicious politico/mainstream media/old comprador elite combo will impose the perception on the majority of the population that the jig is up. Well, the jig is not up, because those 342 votes essential for the white coup/regime change scenario are far from a given.

Some PMDB congressmen – to their credit – still support Rousseff. Brazilian Federal Police has shown that quite a few PMDB members are directly involved in the massive Petrobras scandal at the heart of the Car Wash investigation – including Temer himself. Corrupt to the core Cunha, the lower house leader, should have been in jail already. In this landmark case of Soft Hybrid War, as I argued before, the heart of the matter is a woman President who has not been found guilty of any wrongdoing being «judged» by a bunch of crooks.

Assuming a Temer administration born out of a white coup/regime change comes to fruition, its political platform, according to Brasilia insiders, will have been concocted by the current right-wing opposition, soundly defeated at the previous four presidential elections.

Temer will be at best a tampon. He will not be allowed to run in 2018. He will be gently «persuaded» to compose a ministerial team of right-wing notables. And he won’t meddle with the Car Wash investigation, which will be dissolved into a bathtub full of nitrate, as its initial intention was never to investigate those notables, only the Workers’ Party.

Car Wash will then be unmasked for what it is. This tropical remix of the Mani pulite in Italy in the 1990s was never a legitimate drive to purge the Brazilian political system from corruption; absolutely everybody profiting from this system is corrupt to the core.

Car Wash instead was conceived as a relentless New Inquisition machinery operating to the benefit of the same old comprador elites which are already celebrating Rousseff’s impeachment, plus the potential destruction of Lula’s aura, in case he’s legally prevented from running for President again in 2018.

As for the whole Rousseff impeachment drive, it rests on a dubious legal proceeding by a former opposition Congressman who is – what else – being investigated himself for corruption.

Military coups are so Pinochet-era. It’s never enough to stress that what’s taking place in Brazil is advanced Hybrid War, a white coup/regime change operation organized by the Federal Public Ministry, corporate media (controlled by four families) and a significant part of Congress.

All bets are still off, though. The regime changers are in a hurry because in an extremely fluid situation in a country totally paralyzed and polarized, damning new information will certainly come to light; rats are ratting on a full-time basis, and many a regime changer is bound to be reduced to road kill.

And if by yet another elaborate twist of fate the Brazilian Senate deliberates that Rousseff did not commit a «crime of responsibility» – after all, there’s no evidence she did – the President will be back in power. And the provisional regime change «government» will be thrown to where it already belongs; the stinky dustbin of History.