15 Apr 2016 – Make no mistake-the Middle East is the longest and perhaps the most complex crisis in recent History, this explaining the innumerable, successive –and frustrating- attempts to solve it.

Now, while expecting the US president Barack Obama to follow the “tradition” of his predecessors of calling for a big summit in Washington to talk about this crisis as one of his last official acts, an animal heist fable has just appeared as a new try to serve as poignant metaphor for Middle East relations.

See what is this all about: A 4.5 meter giraffe is one of the main characters in Giraffada, a film shown on April 13 at the United Nations headquarters in New York, depicting the struggles of living in a Palestinian town as seen through the eyes of a young boy who has a close connection with the animal.

The award-winning production’s title is a cross between “giraffe” and “intifada” or Palestinian “uprising,” the director Rani Massalha told the UN News Centre in an interview ahead of the screening.

“The film is set during the second Intifada,” Massalha said, referring to a period of intensified Israeli-Palestinian violence from September 2000 to February 2005.

The film focuses on a widowed Palestinian veterinarian, Yacine, and his 10-year-old son, Ziad, who are trying to keep a giraffe named Rita from dying of loneliness after her partner is killed in an Israeli air raid. The only viable solution is for Rita to be placed in a zoo in Tel Aviv, Israel, or so it seems. 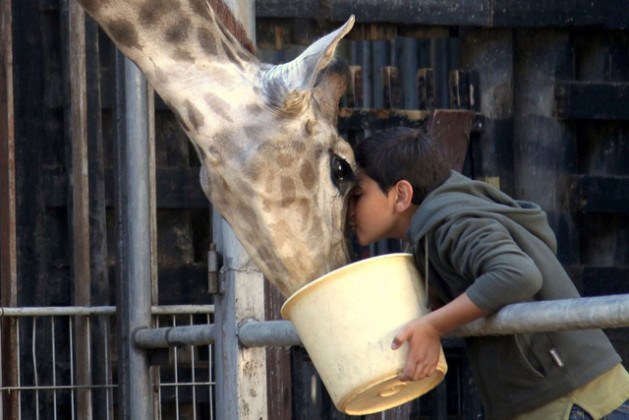 A scene from the film, Giraffada, directed by Rani Massalha and produced by Pyramide Films. The film was screened at the UN on 7 April 2016. Photo: Courtesy of Pyramide Films | Source: UN News Centre

Created as a fable, the film shows “what it is to be a kid in West Bank today living in war, living with a wall surrounding you, with checkpoints, colonies, it’s a very different childhood from people in the West,” the director said.

In one of the most emotional scenes in the film, a giraffe meanders through Palestinian streets, temporarily stopping day activities, such as shopping and praying, as people watch in jaw-dropping disbelief.

“The giraffe is the tallest animal in nature so it sees man from above looking down,” Massalha said, a reference to the height giving the animal perspective to see the situation in the Middle East as it is, not politicized.

The director also used giraffes as a metaphor for how the relationship between the Israelis and Palestinians could be, with two giraffes coming together from both sides of the West Bank barrier, known simply as the wall.

In this interview clip, Massalha discusses how he came up with the idea of having the world’s tallest land animal star in the film, and the connection with hope for peace in the Middle East.

The screening was organised under the auspices of the UN Working Group of the Committee on the Exercise of the Inalienable Rights of the Palestinian People.

Deputy Permanent Representative of Malta to the United Nations and Chairperson of the Working Group, Natasha Meli-Daudey, said the film was chosen because of its portrayal of “the reality of the conflict and the impact of the Israeli occupation on the daily life of Palestinian adults and children.”

“We thought the film was well suited to inform a UN and broader New York audience about such topics,” she continued, adding that more than 500 people, including children, attended the screening.

The film’s human characters include different portrayals of Israeli and Palestinian personalities, often with fluid stereotypes. The characters include an Israeli veterinarian, who is actually played by an Arab actor of Moroccan descent, and whose help is integral to the plot’s success.

In contrast, there is an angry confrontation between the characters and a gun-wielding Israeli settler.

Despite it being a film with animals, shown through a child’s eyes, there are scenes that touch on the brutality of living in a war zone. Rather than give away the film’s ending, the UN News Centre asked Massalha to explain one of the scenes from the film

The ‘Two-State Solution Is in Danger’

All this is fine. The point is that only one day after the film screening, a new UN report warned that the viability of a two-state solution –which envisages peaceful co-existence of both Israel and Palestine– is in danger due to the negative trends on the ground, including recent violence, on-going settlement activity, demolitions, incitement, and the absence of Palestinian unity.

The report, issued on April 14 by the Office of the UN Special Coordinator for the Middle East Peace Process (UNSCO), highlights an increase in settlement activities by Israel and a further consolidation of Israeli control over the West Bank.

It underscores that the demolition of Palestinian homes and livelihood structures more than doubled in the reporting period as compared with the previous six months, noting that the total demolitions by mid-April already exceeded last year’s total. The report also expresses concern over Palestinian access to land and natural resources in ‘Area C’ of the West Bank, among other development factors.

The United Nations Relief and Works Agency for Palestine Refugees in the Near East (UNRWA) has condemned the April 6 large scale home demolitions by Israeli authorities in the Bedouin refugee community of Um al Khayr in the South Hebron Hills. 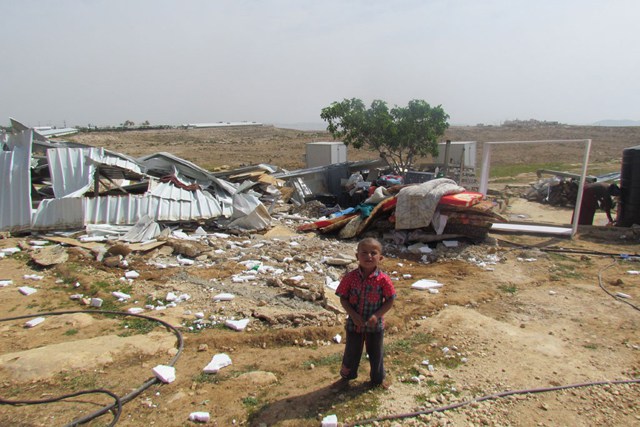 As a result, according to UNRWA, 31 Palestine refugees, including 16 children, were made homeless in a community that has endured several rounds of demolitions and often faced harassment from the nearby illegal Israeli settlement of Karmel.

“As the UN has said repeatedly, these demolitions must stop,” said UNRWA.

Regarding the Palestinian side, the new UNSCO report notes that despite continuing reconciliation discussions held in February and March between Fatah, Hamas and other Palestinian factions in Qatar, no consensus has been reached on achieving genuine Palestinian unity.

“The formation of a national unity government and the holding of elections are vital to laying the foundations of a future Palestinian state,” the report adds.

Citing a protracted humanitarian crisis in the occupied Palestinian territory, the report says that “some 1.1 million people in the West Bank and some 1.3 million in Gaza, over 900,000 of them refugees, need some form of humanitarian assistance in 2016.”

The report stresses that the human rights situation degenerated with the dramatic rise in clashes between Palestinians and the Israeli Security Forces in the West Bank, including East Jerusalem, increased instances of punitive measures against families of alleged perpetrators of attacks, and administrative detentions.

The new UN report will be presented to the Ad Hoc Liaison Committee (AHLC) at its bi-annual meeting in Brussels on 19 April. The Committee, chaired by Norway and co-sponsored by the European Union and the United States, serves as the principal policy-level coordination mechanism for development assistance to the Occupied Palestinian Territory.

Merely three weeks ago, the UN envoy for the peace process in the Middle East warned the Security Council that the prospects for an independent Palestinian state are disappearing, and questioned the political will of the Israeli and Palestinian actors to address the main challenges blocking peace efforts.

“The time has come to ring the alarm bells that the two-state solution is slipping from our fingers,” on 24 March said Nickolay Mladenov, Special Coordinator for the Middle East Peace Process, pointing to ongoing Israeli settlement activities and confiscation of Palestinian land, as well as the continued lack of genuine Palestinian unity.

This article was first published on IPS. Go to Original.

One Response to “Can an Animal Heist Fable Help Solve the Middle East Crisis?”