Climate Change and the Middle East: No Water in the Kingdom of the Two Seas—Nor Elsewhere (II)

This is part II of a two-part series of reports focusing on the impact of climate change on the Middle East & North of Africa region, ahead of the signing ceremony of the Paris climate agreement, on 22 April 2016 in New York.

Read Part I: Will the Middle East Become ‘Uninhabitable’?

18 Apr 2016 – There is an oil producing country situated in the Gulf region, made of a cluster of islands. It is small, surface and population wise. But it holds the dubious privilege of ranking top of the list of 14 out of the 33 countries most likely to be water-stressed in the year 2040.

This country is the “Mamlakat Al Bahrain” (the Kingdom of the Two Seas) or simply Bahrain. 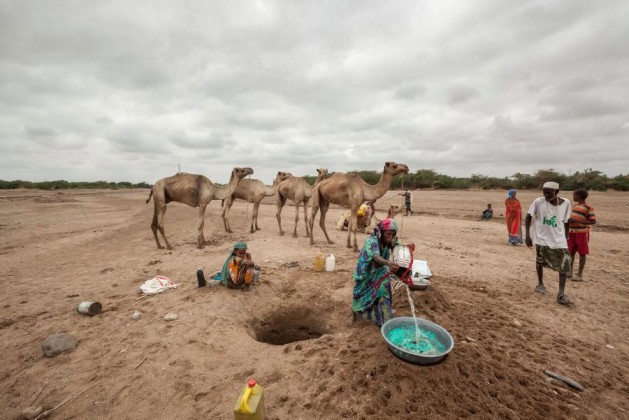 In Somaliland and Puntland, close to two million people are affected by the drought amid the El Niño phenomenon. Somalia is a member of the League of Arab States. Photo credit: WFP/Petterik Wiggers

Distant only 200 kilometres from Iran, Bahrain’s largest island is linked to Saudi Arabia by the 25 km-long King Fahd Causeway. The Kingdom extends over just 765 km2, and is home to 1,4 million people.

Considered as the “white gold” –as opposed to the “black gold”—oil, water scarcity has become one of the major concerns of Bahrain in spite of the fact that it has a high Human Development Index and was recognised by the World Bank as a high-income economy.

It’s Gross Domestic Product (GDP) per capita amounts to 29,140 US Dollars. And it is home to the headquarters for the United States Naval Forces Central Command/United States Fifth Fleet.

All the above does not suffice to make Bahrainis happy. In fact, their country leads the list of 14 out of the 33 countries most likely to be water-stressed in 2040 –all of them situated in the Middle East– including nine considered extremely highly stressed according to the World Resources Institute (WRI).

Other Middle East Arab countries more or less share with Bahrain this front line position of water-stressed states. These are Algeria, Iraq, Jordan, Libya, Morocco, Syria, Tunisia and Yemen. All of them hold a very close second position in the region’ s water-stress ranking.

The total represents two thirds of the 22 Arab countries. Not that the remaining Arab states are water-safe. Not at all: Mauritania, in the far Maghreb West, and Egypt, at the opposite end, are already under heavy threat as well.

The whole region, already arguably the least water-secure in the world, draws heavily on groundwater and desalinated sea water, and faces exceptional water-related challenges for the foreseeable future, says the WRI’s report: Ranking the World’s Most Water-Stressed Countries in 2040. 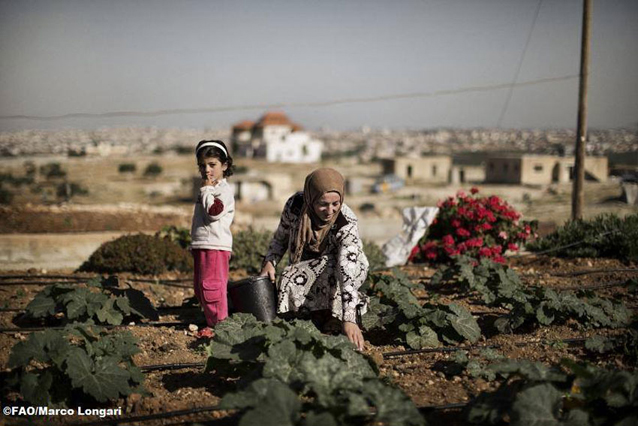 Water scarcity is one of the most urgent food security issues facing Near East and North Africa countries: fresh water availability in the region is expected to drop by 50% by year 2050. Photo credit: FAO / Marco Longari

The report’s authors Andrew Maddocks, Robert Samuel Young and Paul Reig foresee that world’s demand for water, including of course the Middle East, is likely to surge in the next few decades.

But it’s not clear where all that water will come from, they say. “Climate change is expected to make some areas drier and others wetter. As precipitation extremes increase in some regions, affected communities face greater threats from droughts and floods.”

While changing water supply and demand is inevitable, exactly what that change will look like around the world is far from certain. A first-of-its-kind analysis by WRI sheds new light on the issue.

Using an ensemble of climate models and socioeconomic scenarios, WRI scored and ranked future water stress—a measure of competition and depletion of surface water—in 167 countries by 2020, 2030, and 2040.

“We found that 33 countries face extremely high water stress in 2040 (see the full list). We also found that Chile, Estonia, Namibia, and Botswana could face an especially significant increase in water stress by 2040. This means that businesses, farms, and communities in these countries in particular may be more vulnerable to scarcity than they are today,” say the authors.

Poverty of the Arab region with regard to water resources is reflected in water insecurity for human beings and agriculture. While water consumption per capit is estimated in at least one 1,000 cubic meters a year according to the global rate, the average Arab citizen’s share comes down to nearly 500 cubic meters per year, this placing Arab countries below the water poverty line.

This comes at a time when the Arab region has not taken advantage of its water resources of about 340 billion cubic meters, using only 50 per cent. The rest is lost and wasted.

Regarding the North of Africa, the Egyptian Ministry for Environment has recently admitted that large extensions of the country’s Northern area of the Nile Delta, which represents the most important and extensive agricultural region in Egypt, is already heavily exposed to two dangerous effects: salinasation and flooding. This is due to the rise of the Mediterranean Sea water levels and the land depression.

The impact of global warming and growing heat waves is particularly worrying the Egyptian authorities as it might reduce the flow of the Nile water in up to 80 per cent according to latest estimates. All this adds to the loss of massive investments made to promote domestic and foreign tourism.

Meanwhile, Syria, Jordan and Iraq would be sentenced to a similar fate.

In some Middle East countries, water scarcity will increase conflictivity among Bedouin population who survive thanks to pasturage.

Dr. Moslem Shatout, the Cairo-based professor of Sun and Space Research and Deputy Chairman of the Arab Union for Astronomy and Space Sciences, considers that the Arab North African countries are among the most affected, by large, by the climate change impact.

Satellites monitoring, in particular those carried out by the US-French satellite, have detected between 1991 and 2005, a global rise in the sea levels of 3 millimetres per year, “but given that the Mediterranean is a semi-closed sea this rise reaches 8 millimetres per year.”

In Morocco, the effect of global warming and water scarcity have already forced farmers to cultivate only one third of the lands they used to farm.

A similar situation is being witnessed in Algeria, with a much worse situation in Mauritania.

In the case of Morocco and Algeria, while expected rainfalls should be of at least 400 millimetres/year, the last five years this amount went down to just 200 millimetres, that’s half of the minimum needed.

Last but not least: while Morocco and Algeria have high rocky coasts, this protecting them from sea floods, Arab countries situated at the East of the Mediterranean sea, such as Egypt, Lebanon, Syria and Palestine, are exposed to floods.