3 Apr 2016 – That “terrorism” is a malleable term of propaganda, with no fixed meaning or consistent application, is now quite well-established. Still, its recent application to a spate of violence targeting Israel’s occupying soldiers in the West Bank is so manipulative and extreme that it’s well worth highlighting.

Israel has militarily occupied the West Bank for decades (it’s also still functionally occupying Gaza, as this two-minute video proves). The West Bank “occupation is illegal under international law and the United Nations has repeatedly told the country’s government to vacate Palestinian territory.” Even ardent defenders of Israel admit that “the West Bank is under a legal regime of belligerent occupation” and “Israel’s settlement enterprise is, and has always been, grossly illegal under international law.” Despite this world consensus, Israeli settlements continue to grow rapidly. Israel is not engaged in any meaningful efforts to negotiate an agreement to end the occupation, and leading Israeli ministers now openly oppose such efforts. 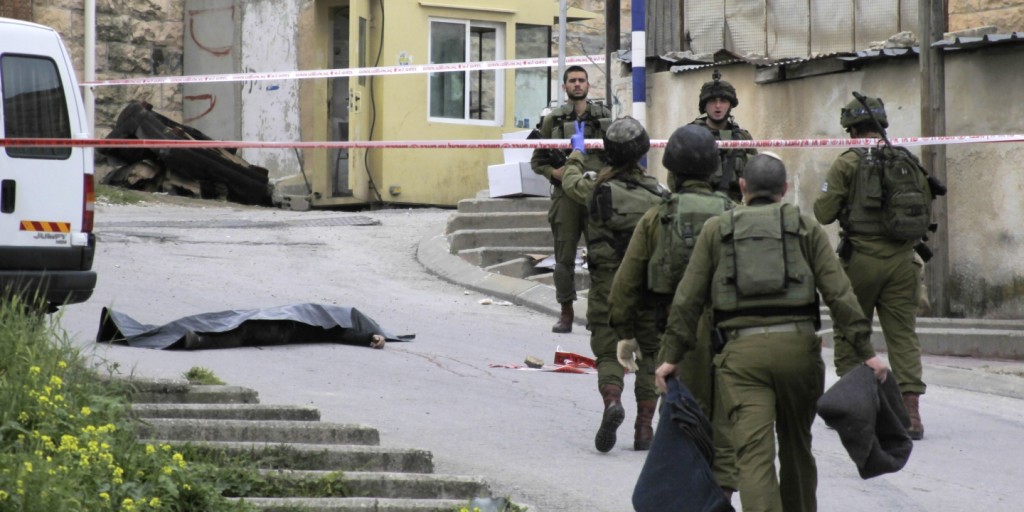 Israeli soldiers stand near the body of a Palestinian who was shot and killed by a soldier while lying wounded on the ground after a stabbing attack in Hebron in the West Bank on March 24, 2016.

In response to this, there has been a series of attacks over the past year by Palestinians on Israeli occupying soldiers in the West Bank. In the Israeli and American press, the Palestinians attacking these occupying soldiers are invariably called “terrorists” and their attacks are denounced as “terrorism” (“The two soldiers were stabbed while at a guard post at the Har Bracha settlement, located in the northern West Bank. … Troops were searching for the terrorists”).

For those (such as myself) who have long contended that the term “terrorism” now has little meaning beyond “violence by Muslims against the West and its allies,” and no purpose other than to delegitimize violence by one side while legitimizing the other side’s, can there be any better proof than this?

There have been Palestinian attacks on Israeli civilians of course (while far more Palestinian civilians have died at the hands of the Israeli army), but in these specific cases, these Palestinians are attacking purely military targets, not civilians. Those military targets are soldiers deployed to their soil as part of an illegal occupying army. In what conceivable sense can that be “terrorism”? If fighting an occupying army is now “terrorism” simply because the army belongs to Israel and the attackers are Palestinian, is it not incredibly obvious how this term is exploited?

The U.S. has frequently done the same: invade and occupy countries such as Iraq and Afghanistan and then label anyone who fights their occupying armies as “terrorists,” even putting some in Guantánamo for that. Similarly, attacks against military bases of the U.S., U.K., and other Western countries are routinely labeled “terrorism.”

Needless to say, both Americans and Israelis (along with most others in the world) reserve for themselves the absolute right to fight against any foreign army that occupies their land. Indeed, Hollywood, in the 1980s, produced a film called Red Dawn, which imagined an occupation of the U.S. by the Soviet Union and its Nicaraguan and Cuban allies. It told the story of the heroic U.S. citizens, led by high school students, who waged a guerrilla war against the occupying troops, killing dozens upon dozens of them. Imagine the widespread confusion, and outrage, that would have resulted if someone accused the filmmakers of glorifying “terrorism” by demonizing the fictional American resisters as “terrorists”:

The film was updated in 2012 with a sequel depicting “one group of unlikely [American] heroes” who waged guerrilla warfare against North Korean forces who had invaded and occupied the U.S. (the film originally depicted these American heroes attacking and killing an occupying army from China, but, in post-production, the producers changed the identity of the occupiers to North Korean in order to preserve access to Chinese theaters):

So if violent resistance is illegitimate “terrorism,” what about other alternatives for resisting the decades-old, still-expanding illegal Israeli occupation? The nonviolent route embraced by Palestinian activists and their anti-occupation allies around the world is a campaign of boycott, sanctions, and divestment (BDS) aimed at Israel, modeled after the campaign that helped end South Africa’s apartheid regime in the 1980s (a regime that, just by the way, was a close ally of both the U.S. and Israel).

But there is a highly successful campaign by Israel and its U.S. allies not only to decree this nonviolent boycott campaign illegitimate, but literally to outlaw it. Official bodies are enacting rules to censor and officially suppress it by equating the campaign with “anti-Semitism” even though, as fervent Israel supporter Eric Alterman wrote in the New York Times this week, “it is filled with young Jews.”

The Intercept and other outlets have repeatedly reported on official governmental and university actions to ban BDS activism by equating it with “anti-Semitism.” In California, the regents of the nation’s largest university system just enacted a resolution strongly implying that BDS activism is anti-Semitic and thus in violation of university rules. In New York last week, dozens of state legislators, from both parties, have demanded the de-funding of a pro-Palestinian group at CUNY, a move denounced by the campus free speech group FIRE. Canadian Prime Minister Justin Trudeau, when running for office, announced that BDS “has no place on Canadian campuses.” In France, people are literally arrested as criminals under “hate speech” laws for wearing T-shirts advocating BDS. Measures in the U.K. have been enacted to legally bar support for such boycott movements. Laws and proposed bills in Israel ban advocacy of the movement and bar supporters from entering Israel.

So look at what has happened here. When Palestinians fight against occupying troops on their soil, they are denounced — and often killed — as “terrorists.” Meanwhile, nonviolent campaigns to end the occupation through a South Africa-style boycott are demonized as “anti-Semitism” and officially barred — censored — in all sorts of ways, in numerous countries around the world.