Is US-Funded Destabilization in Latin America Now Paying Off?

The preconditions for “regime change” take, in some cases, years of careful preparation. 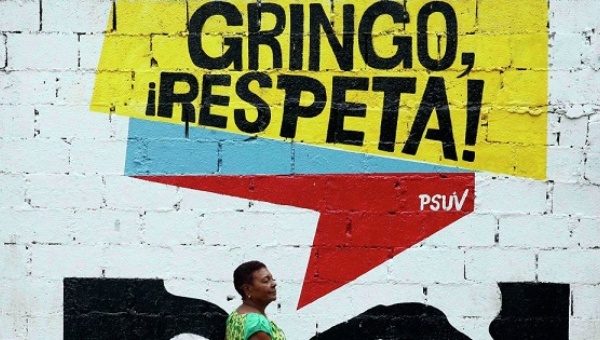 A woman walks by a sign of the United Socialist Party in Venezuela that reads: “Gringo Respect!”. | Photo: Reuters

14 Apr 2016 – Most progressive governments in Latin America find themselves under intense attack in what is evidently a well synchronized and well financed continental plan of destabilization.

Riots, street demonstrations, anti-corruption campaigns, protests about the domestic negative impact of the world economic crisis, general strikes, impeachment efforts, economic sabotage, and the like, have become the battle horses on which oligarchic forces in cahoots with Washington are riding to carry out “regime change.”

So far, conservative forces in Latin America have been successful in overthrowing President Manuel Zelaya in Honduras in 2009 and President Fernando Lugo in 2012 in Paraguay. Both presidents were ousted by oligarchic parliamentary majorities with mass support from middle class “civic associations”, in complicity with the judiciary, with the latter providing a veneer of legality.

The preconditions for “regime change” take, in some cases, years of careful preparation. This normally involves intoxicating media campaigns of demonization aimed to exacerbate political polarization to the maximum, through the instilling of fear, the staging of aggressive and sometimes violent, middle class mobilizations, the activating of many associations of civil society, and the setting up of, sometimes hundreds, of externally funded NGOs.

The aim is to question the legitimacy of the “target government” which usually involves the systematic discrediting of existing political institutions so as to foster chaos as the most conducive context for “regime change”. This strategy has been “theorized” in manuals that are mass-produced and get heavily promoted free of charge by establishment outfits. (1)

Despite the fastidiousness with which Washington and domestic perpetrators seek to enshrine their efforts at “regime change” in any one nation with the veil of legality, constitutionality, democracy promotion, regional autonomy, and virtuous legitimacy, always a powerful media apparatus is activated the world over, unleashing a barrage of negative reporting and demonization of the “target government” with one overriding message: the solution to created crisis is the ousting of the government.

In this “regime change” narrative, the ousting of the target government, being the cause of “civil society’s rebellion”, is fully justified. Thus for example the highly illustrative New York Times’s editorial of April13, 2002, on occasion of the brief ousting of Hugo Chavez: “Venezuelan democracy is no longer threatened by a would-be dictator.”

The NYT explained that Chavez had been ousted “after the military intervened and handed power to a respected business leader.” The key, therefore, is to portray the “ruler” of the target government as a threat to democratic civilization, thus the NYT editorial justifies the 2002 coup in Venezuela because Chavez “battled the media and alienated virtually every constituency from middle-class professionals, academics and business leaders to union members and the Roman Catholic Church. (2)

So, 21st century “regime change”, different from the more traditional 20th century U.S.-orchestrated coup d’état, involves an intense “battle for hearts and minds”, an essential component of the strategy.(3)  Thus, huge financial, political and cultural resources are mobilized to bring about hegemony for “regime change” in society and in all state and civil society institutions, going as far, in some cases, as even co-opting sections of the downtrodden. Most of this is “facilitated” with generous NED and USAID grants awarded over many years.

Faced with its own steady decline and the rise of radical governments in the post-Soviet era, the U.S. seeks to destabilize and oust governments through “color revolutions” as in Georgia, 2003 and the Ukraine, 2004 and 2014. Consequently the U.S. has substantially reorganized its architecture for intervention with the CIA becoming a mere appendix but with USAID and the National Endowment for Democracy and their many associated bodies taking center stage and receiving the lion’s share of the resources. The modality may have changed but U.S. foreign policy remains pretty much what it was: to remove governments it does not like. U.S. State Dept. and USAID budget is bigger than the GPD of many states, in 2016 it was US$50.3 billion.

Among the key U.S. institutions involved in “regime change” is the U.S. State Department, the body with the biggest authority, but there is also the United States Southern Command, the Congress and Senate Foreign Affairs Committees, and the CIA. Then further down the food chain, there are USAID, NED, Office for Transition Initiatives, American Center for International Labor Solidarity and American Institute for Free Labour Development, among the most important ones.

They work closely together and in the pursuance of the same aims, with the International Republican Institute, chaired by John McCain of CHECK; the National Democratic Institute, chaired by Madeline Albright; Transparency International; and Centre for International Private Enterprise. They all channel huge sums to support civil (and when possible) military subversion to create the conditions for “regime change”. They also channel huge sums to fund “civil society” associations, political parties, media outfits, NGOs, professional bodies, trades unions, think tanks, business, student groups and so forth.(4)

These institutions are the field commanders that coordinate the national detachments in every target country around a regional perspective so as to maximize the results of every push for “regime change” in any individual Latin American nation. We are increasingly seeing former right-wing Latin American presidents acting jointly to contribute to the destabilization of Bolivarian Venezuela, for instance.

Additionally there is a raft of “private” or “independent” bodies concerned chiefly with Latin America, the most important of which are Inter-American Press Association; Fundacion para el Analisis y los Estudios Sociales – led by Jose Maria Aznar; the Instituto Prensa y Sociedad; hundreds of Think Tanks; and possibly thousands of NGOs that share the “regime change” aim but that do it from a specialist angle. To all of this architecture of U.S. intervention, the overwhelming majority of the world corporate media play a decisive role, making any U.S. led intervention, a lethal political threat to the survival of any “target government”.

Most progressive governments in Latin America have been or are subjected to systematic levels of traumatic and deliberately created social, economic and political chaos, politics and culture, which in many cases it can go on for years. In Cuba for five decades, in Nicaragua (on and off) nearly four decades and in Venezuela for 17 years thus far, with no end in sight.

Venezuela’s Bolivarian government is currently in the crosshairs of U.S. destabilization plans and “regime change” efforts through an economic war that has the Bolivarian process on the ropes. In Argentina, three years of an intense dirty war against Cristina Fernandez’s government, aspects of which had sinister overtones, paid off when at the November 2015 presidential election, the Right’s candidate, Mauricio Macri, won the election by a small margin of 1 percent. In Ecuador, a police mutiny in September 2010, obviously instigated from abroad and with huge U.S. support, nearly succeeded in ousting the government with with President Rafael Correa miraculously escaping with life.

The destabilization against Ecuador continues with the “revolt” of civil society and very violent street protests. And in Brazil, through a very intense and thoroughly intoxicating media campaign, a “regime change” push seeking to oust the democratically elected and legitimate president Dilma Rousseff is underway, as we write is not clear whether the effort to oust Dilma will be successful or not.

By substantially reducing export revenues that fund progressive social programs, the persistent world economic crisis significantly helps the “regime change” efforts by the U.S. and its allies. It may be just coincidence but the U.S. ambassador in Paraguay when elected president Fernando Lugo was ousted by a right-wing parliamentary coup, was Liliana Ayalde. The current U.S. ambassador in Brazil, where a right-wing parliamentary coup against elected president Dilma Rousseff is in progress, is Liliana Ayalde.

(3) The overthrow of Honduras President Manuel Zelaya, in June 2009, has led to the book with the very suggestive title “The Good Coup” (Mario Caceres di Iorio, CCB, Canada, 2010).

(4) See “Evolution of USAID and NED in Dominguez,” Lievesley and Ludlam, Right-Wing Politics in the New Latin America, Zed, 2011.

Francisco Dominguez is a senior lecturer at Middlesex University, where he is head of the Centre for Brazilian and Latin American Studies.