Krugman Attacks: The Establishment Snarls a Warning to Sanders 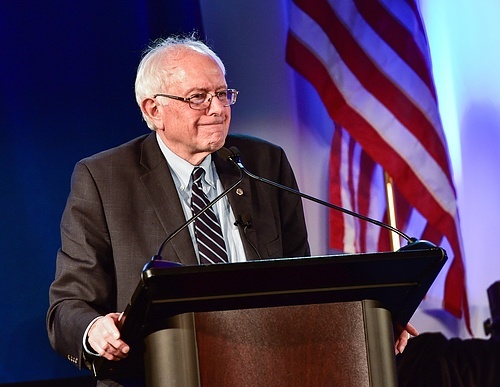 12 Apr 2016 – When Republicans are in the White House, Paul Krugman and the NY Times sometimes sound pretty good. But when someone starts seriously and effectively challenging core assumptions and values of our political economic system, the progressive veneer quickly vanishes. This is demonstrated in Paul Krugman’s verbal attack on the Bernie Sanders campaign in his “Sanders Over the Edge” editorial.

Krugman does not hold back. Bernie supporters and Bernie himself are described by Krugman as intolerant, cultish, shallow, vague, without substance, lacking character and values, dishonest, short on ethics, really bad, petulant and self-righteous. Wow.

Krugman’s diatribe deserves scrutiny and lampooning. The purpose seems to be to ridicule, threaten and warn Sanders to get back in line. Hopefully progressives will intensify support for Bernie and tell Krugman to get his facts straight.

Here are some key falsehoods in the Krugman attack.

Krugman dismisses Sanders’ call to ‘break up the big banks’ and suggests the financial giants did not cause the economic crash; the problem was “predatory lending” by smaller outfits such as Countrywood Financial. This is nonsense which contradicts what Krugman himself has said in the past. The predatory lenders were minor players in the process. The loans would never have been issued if they were not being bought up and bundled together into collateral debt obligations (CDOs) and other “producdts” by major financial institutions such as Goldman Sachs. They were the ones driving the operation not the individual lenders.

Krugman goes on to claim Sanders does not have any specific proposals and that “going on about big banks is pretty much all Mr. Sanders has done” and “absence of substance beyond slogans seems to be true of his positions across the board”. This is untrue, easily confirmed by looking at the Sanders website. Sanders has called for a tax on Wall Street speculation/trading, dramatic changes in the tax code, increasing the minimum wage to $15 per hour, canceling detrimental trade accords and imposing individual penalties for corporate crime. These are clear and specific with similar details in virtually every policy area.

Krugman claims Sanders and supporters were ‘just plain dishonest’ when they accused Clinton of receiving substantial funding from the fossil fuel industry. Krugman relies on the establishment “fact check” by NYT, WaPo and NPR. However that “fact check” has been refuted by Fairness and Accuracy in Reporting which confirms that Clinton did in fact receive substantial funding as claimed by Sanders. The FAIR title gives the essence: “NPR Fact Checker can’t be bothered to check”.

Krugman gets really worked up because Sanders issued a “rant” suggesting Mrs. Clinton may not be “qualified” to be President after taking so much funding from Wall Street and supporting recent and past US foreign aggression and intervention which has backfired badly. Krugman says this is “really bad on two levels”: it is “imposing a standard of purity “ and raising the specter that Bernie supporters may not happily support Clinton as the “strong favorite for the Democratic nomination”. This is the core message from Krugman: a warning to Sanders to get back on the establishment bus.

Krugman thinks it is hopelessly purist to expect a President that will not take the country into new wars and sustain illegal coups such as Honduras. Many Bernie supporters know about Clinton’s role in Honduras, Libya and beyond, probably better than Krugman. That’s why some will not transfer their votes to her.

Is Krugman not aware of the reason for Bernie’s success? Bernie is calling for radical transformation in the economy, criminal justice, health-care, education and foreign policy. He is publicly saying this needs to be done with a populist ‘political revolution’. He is winning huge support with that message and because many see him as sincere and authentic, not a normal politician. That is clearly troubling to Krugman and the NY Times.

The NYTimes has endorsed Hillary Clinton and their candidate is in jeopardy. This may explain escalating attacks on Bernie and whitewashes of Hillary. See the Young Turks for a great video take-down of Paul Krugman and his attack on Bernie.

Rick Sterling is a co-founder of Syria Solidarity Movement. He can be contacted at rsterling1@gmail.com