Letter from a Birmingham Jail: Poignant and Timely

On April 16th, 1963, Dr. Martin Luther King, Jr. was sitting in a stark jail cell in Birmingham, Alabama, where he had been arrested for engaging in nonviolent direct action. 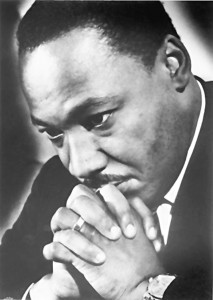 An ally had smuggled a newspaper into the jail that contained the recently published piece, A Call To Unity, written by eight local white clergymen who thought civil rights should be won in the courts, not in the streets. Dr. King began drafting his response on the margins of the newspaper – the only paper he was allowed at first. Later, a black trusty brought Dr. King some scratch paper. Dr. King’s lawyers pieced the writing back together and prepared it for publication.  It was widely published in 1963, and included in Dr. King’s book, Why We Can’t Wait, in 1964.

In Letter From A Birmingham Jail, Dr. King responded to criticisms of nonviolent direct action on religious, moral, legal, historic, and political grounds. He chastised the attitudes of the white clergymen, and other white progressives. He stated clearly the intentions of the movement, and wrote expressively and honestly about the cruel effects of racism and discrimination.

Some of our most widely recognized quotes from Dr. Martin Luther King, Jr. come from Letter From A Birmingham Jail, including, “Injustice anywhere is a threat to justice everywhere. We are caught in an inescapable network of mutuality, tied in a single garment of destiny. Whatever affects one directly, affects all indirectly.”

Dr. King concludes the letter by apologizing for its length, writing poignantly, “but what else can one do when he is alone in a narrow jail cell, other than write long letters, think long thoughts and pray long prayers?” He reaches out a hand of reconciliation to the eight clergymen, hoping they can meet in person one day, and saying, “Let us all hope that the dark clouds of racial prejudice will soon pass away and the deep fog of misunderstanding will be lifted from our fear drenched communities, and in some not too distant tomorrow the radiant stars of love and brotherhood will shine over our great nation with all their scintillating beauty.”

Letter From a Birmingham Jail is as timely today as it was in 1963. The scourge of racism has not vanished; it has changed form. Segregation has ended, legally, but persists economically and socially. Many white allies find their stances eerily reminiscent of the eight Alabama clergymen as they rebuke Black Lives Matter over choices of tactics. And, the contemporary voices of African-American organizers share Dr. King’s clarity about the scope of injustice they face, and the importance of immediate action.  Reading Letter From a Birmingham Jail with an eye on the past, the present, and the future is a powerful, challenging, and insightful experience. As we approach the anniversary of this historic letter, take the time to read, reflect, and find ways to engage with the ever-timely messages it contains.

Anticopyright: Editorials and articles originated on TMS may be freely reprinted, disseminated, translated and used as background material, provided an acknowledgement and link to the source, TMS: Letter from a Birmingham Jail: Poignant and Timely, is included. Thank you.