The Judaisation strategy did not only aim at confiscating lands, but also to undermine the rise of Palestinian leaders. 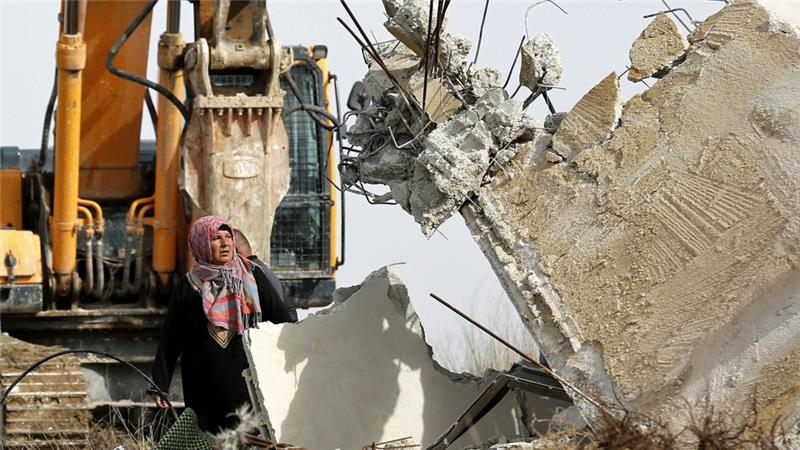 A Palestinian woman stands in front of Israeli bulldozers to stop them during the demolition of a house owned by Palestinians in the West Bank village of Biet Ula, January 2016. [EPA]

30 Mar 2016 – On March 30, 1976, Palestinians marched against an Israeli decision to expropriate 2,000 hectares of land around the Arab villages of Araba and Sakhnin as a part of a plan to “Judaise the Galilee”.

The Palestinian “Land Day” marked the first act of collective civil disobedience against the racist colonisation and dispossession of the Palestinians of their lands and rights since the creation of Israel in 1948.

It also signalled the failure of Israel to subjugate Palestinians who remained in their towns and villages, after around 700,000 of them were either expelled or forced to flee battles or massacres committed by Zionist armed groups in 1948.

While the newly created state of Israel extended citizenships to Palestinians within its borders – who found themselves a minority in their own homeland – they were and continue to be subjected to racist policies that aim to deprive them of their lands and rights.

Most importantly, though, on that day in 1976, Palestinians – who are referred to by Israel as “Israeli Arabs” – declared that they were an inseparable part of the Palestinian people and their struggle – a point again and again reiterated by successive protests and uprisings in support of Palestinian national rights.

Palestinians inside Israel, the Israeli-Occupied Territories of the West Bank, Jerusalem and Gaza, and those in exile, mark Land Day and view it as an assertion of the Palestinians’ right to return to their homeland.

It is the right of return, recognised in the United Nations Resolution 194, that drives Palestinians to continue with the commemoration of Land Day – regardless of their geographical location.

But six decades later, Israel still follows the same policies. In the aftermath of the Land Day, the historic resistance of Palestinians didn’t stop Israeli land-grab – whether inside Israel or in the Occupied Territories.

The land confiscation is not simply part of an official systemic policy to evict Palestinians and replace them with Jewish residents, but part of an endorsed Zionist strategy.

According to Israeli historian Ilan Pappe, the official “ethnic cleansing” campaign was launched even before the establishment of Israel, at a meeting in March 1948 chaired by the Zionist leader – and, later, first President of Israel – David Ben-Gurion.

The ethnic cleansing campaign led to the expulsion of 70,000 Palestinians and the destruction of 601 Palestinian villages in 1948, and the subsequent policies of land expropriation and eviction of Arabs.

After the establishment of Israel, the “Judisation” strategies focused on Arab-populated areas of Negev and Galilee with the declared goal of creating “demographic balance” – which practically means increasing the Jewish population of these areas at the expense of its Arab residents.

In 2013 the Israeli Haaretz daily newspaper called for the halt of the long-established strategy, declaring “the Judaisation of Galilee means racism”, while Israeli professor and architect Oren Yiftachel argued in several studies that “Judaisation” aims to ensure Jewish control and dominance as well as prevent dispossessed Palestinians from returning to their villages.

Yet the latest conclusions by Israeli journalists and writers don’t really offer much new except a confirmation of what Palestinians knew and experienced all along – that their dispossession was not an accident but part of the very essence of Israel’s continued colonisation and apartheid strategy.

However, the Judaisation strategy in 1976 was not only aimed at confiscating lands, but also to undermine the rise of Palestinian national leaders, and prevent links and communication among the Palestinians in the West Bank and the Gaza Strip with the Palestine Liberation Organization (PLO).

Thus, the protests that Israel suppressed violently and resulted in the killing of six unarmed Palestinians were the first mass assertion by Palestinians of political identity and support for the Palestinian liberation movement, which was at the time embedded in the PLO.

A boost for resistance

The irony is that part of the Israeli fears about growing contacts between “Israeli” Palestinians and Palestinians in the West Bank – including East Jerusalem and the Gaza Strip – was Israel’s own “victory” in 1967.

It was the Israeli Communist Party – co-founded by Arabs and Jews – that understood the message and called for a meeting in Nazareth to mobilise for what became Land Day.

It was no surprise at the time as the Communist Party provided the only channel for suppressed Palestinians to adhere to their identity and the only representation for their civil rights.

Leaders and members of the party included famous novelist Emile Habibi, historian Tawfik Toubi and poets Tawfiq Zayyad, Samih al-Qasim and Mahmoud Darwish (who had already left the party by then), who provided the strongest voices for Palestinian nationalism and were the first to defy Israel by contacting the PLO.

As such, the Land Day strike practically backfired against the political goals, inspiring one of the most powerful poems written by Zayyad that continues to resonate across the Palestinian generations:

“In Lidda, in Ramla, in the Galilee,
we shall remain
like a wall upon your chest,
and in your throat
like a shrad of glass,
a cactus thron,
and in your eyes
a sandstorm.

We shall remain
a wall upon your chest
… Here we shall stay.”

INFOGRAPHIC: What is land day?

Lamis Andoni is an analyst and commentator on Middle Eastern and Palestinian affairs.