26 Mar 2016 – It’s real simple. Create a threat, predicate expanding autocracy at home and endless wars of hegemony abroad upon confronting that threat, and all the while intentionally perpetuate fear, hysteria, hatred, and division to keep that threat relevant in the hearts and minds of as many people as possible. 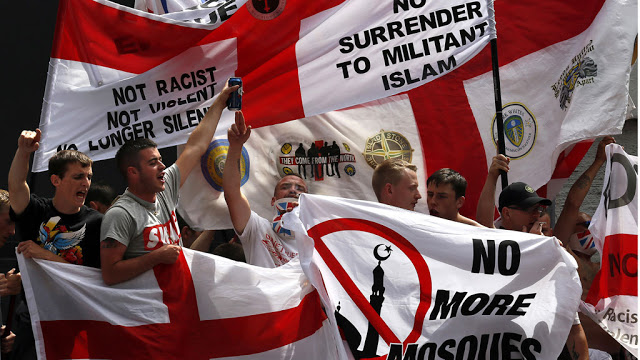 Described above is an elementary tactic used by special interests throughout human history, and today’s special interests being no exception. Today, the contrived threat of choice is “terrorism.” It is a well-documented fact that organizations like Al Qaeda and the so-called “Islamic State” (ISIS), are creations and geopolitical tools of the United States, its European allies, and its Middle Eastern subordinates, including Turkey and the Persian Gulf states.

The means of keeping this contrived threat fresh in the minds of the public is Islamophobia – the scapegoating of some 1.6 billion Muslims around the world for the deeds of US-Saudi indoctrinated, armed, funded, and backed extremists.
The role the United States and Saudi Arabia played in the inception of Al Qaeda during the 1980’s to wage proxy war on the Soviet Union in Afghanistan is documented history. What is less widely known, is the role these same two nations played in the creation of ISIS -which admittedly branched off from Al Qaeda.

However, America’s own Defense Intelligence Agency (DIA) admitted in a leaked 2012 memo that indeed, just as Al Qaeda was created to wage proxy war in Afghanistan, a “Salafist” (Islamic) “principality” (State) was intentionally created in eastern Syria to wage proxy war against Damascus.

If the situation unravels there is the possibility of establishing a declared or undeclared Salafist principality in eastern Syria (Hasaka and Der Zor), and this is exactly what the supporting powers to the opposition want, in order to isolate the Syrian regime, which is considered the strategic depth of the Shia expansion (Iraq and Iran).

To clarify just who these “supporting powers” were that sought the creation of a “Salafist” (Islamic) principality” (State), the DIA report explains:

The West, Gulf countries, and Turkey support the opposition; while Russia, China, and Iran support the regime. 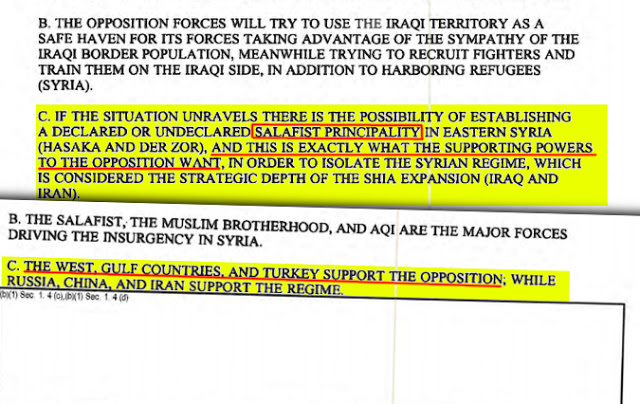 It is clear then, that if the US and its allies are behind ISIS, than attacks attributed to ISIS are either directly or indirectly related to US foreign policy. It is very clear that ISIS serves Western objectives in the Middle East and North Africa region (MENA) by waging war against precisely those governments the US itself has slated for “regime change.” ISIS also serves as a convenient pretext for direct military intervention abroad when possible.

What may be less clear to some, is what the US and its allies have to gain when ISIS launches attacks in France, Belgium, and other targets across both East and West.

However, it is indeed clear – clear that they serve to bolster the contrived threat of “global terrorism” and both the growing autocracy at home and expanding wars abroad,

Wouldn’t it be curious if those most vocal in promoting fear, hysteria, hatred, and division against Muslims to perpetuate the contrived threat of “global terrorism” represented the same special interests both involved directly in arming, funding, training, and exploiting the violence of terrorist groups like Al Qaeda and ISIS, as well as the same special interests profiting the most from the perpetual “War on Terror?”

It would be curious – and it also happens to be the verified truth.

A growing ecosystem of Islamophobia networks is centered around a cadre of Neo-Conservatives who led the United States into the Afghanistan and Iraq wars, as well as advocated for wars against Iran, Libya, Syria, Sudan, and many more in the wake of the September 11, 2001 terrorist attacks in Washington, New York, and Pennsylvania.

One of the highest level former US government representatives publicly involved, John Bolton, was a vocal advocate for global war including in Iraq, Afghanistan, Syria, Libya, and Iran, and  has for years served as the gravitational center of at least America’s Islamophobia subsidiary. Around him orbits media personality, racist, bigot Pam Geller, Robert Spencer, and Project for a New American Century (PNAC) signatory, Daniel Pipes.

Further in the peripheries, are faux-alternative media cognitive infiltrators like WorldNetDaily run by Joseph Farah, a card-carrying member of the Neo-Conservative war lobby and an associate with many advocates who have played a direct role in the subversion and destruction of Syria. Farah himself is Syrian-Lebanese, and involved heavily in organizations created by the US aimed at the overthrow and reordering of the Levant.

WND, Pam Geller, Robert Spencer, and many others who lead the American Islamophobia subsidiary, in tandem with their European counterparts, have invested years in fanning the flames of misunderstanding, hatred, fear, and hysteria among Western populations. They do this to both divert from the fact that the very interests they represent are the source of global terrorism carried out by Al Qaeda and ISIS – creations not of Islam, but of US foreign policy, and to create sufficient rhetorical justification for continued American intervention overseas across MENA and beyond.

The West has scarcely managed to justify its many and still multiplying wars abroad, and global consensus regarding America’s role in the creation and perpetuation of Al Qaeda and ISIS is reaching critical mass. It is not difficult to see that without the significant Islamophobia being spread through at least segments of the world’s population, just how much more tenuous US foreign policy would be.

Those in the Alternative Media Selling Out

It has been a stated matter of US policy, best articulated in former-US Administrator of the Office of Information and Regulatory Affairs Cass Sunstein’s “Conspiracy Theories” paper, to infiltrate and redirect the alternative media, who even years ago, had already begun to significantly undermine US spheres of influence within global information space.

Called “cognitive infiltration,” the idea was to infiltrate the alternative media with messages not directly contradicting the truth, but contradicting it enough to slowly bring readers, viewers, and listeners back into government controlled narratives. That is precisely what WND and those that have since found themselves in close cooperation with them and paid lobbyists like Pam Geller and Robert Spencer have done.

“Co-opted alternative media organizations that had for years warned the public of the dangers of false flag terrorism, US government involvement behind both Al Qaeda and more recently ISIS, and who had warned of Western attempts to scapegoat religions, races, and political systems to divide and control people, are now directly complicit in doing all of the above.”

What is left is for genuine alternative media to recognize this split and continue focusing on telling the truth overall – and in particular – the interests and agendas being served by the Islamophobia industry. Co-opted alternative media organizations that had for years warned the public of the dangers of false flag terrorism, US government involvement behind both Al Qaeda and more recently ISIS, and who had warned of Western attempts to scapegoat religions, races, and political systems to divide and control people, are now directly complicit in doing all of the above.

The goal should not be to fall into perpetual infighting with these co-opted individuals and organizations. The goal should be to treat these sell-outs precisely as the rest of the corporate-controlled media is treated – a voice to be exposed by simply documenting and reporting the truth.

Lying about Groups of People to Start Wars = Oldest Trick in the Book: Why are Some Still Falling for It?

While in hindsight, considering the lies that have been told to sell wars to the Western people, and the documented wealth, power, and influence these wars have brought special interests at the cost of the rest of humanity, it should seem obvious to people that those peddling Islamophobia have vested monetary and political interests in doing so, and that the truth certainly lies well beyond their simplistic generalizations, slurs, and vitriol.

But because indulging  in racism and bigotry is a path of lesser resistance than informed inquiry, research, and self-guided learning, the establishment has found a means of diminishing the impact of alternative media. It will be up to genuine alternative media to find a way of restoring and even expanding upon its previous impact.