The Wounded Phoenix of Palmyra

31 Mar 2016 – Eyewitness accounts from the scene this morning (3/30/2016) confirm that the Syrian Army has liberated all parts of the city of Palmyra (Tadmor) including all of the ancient city, from 10 months of occupation and destruction by ISIS. The Syrian army spokesman explained that the city, home to some of the most extensive ruins of the Roman Empire, would now become a “launch pad” for operations against ISIS strongholds in Raqqa and Deir al-Zor, further east across a vast desert. Syrian state media announced yesterday that Palmyra’s military airport was again receiving air traffic.

What played a large role is preventing ISIS from doing even more damage to Palmyra was the leadership of Syria’s Department of Antiquities and Museum (DGAM) which since 2015 has been encouraging and leading efforts by the local community, including tribal, and religious leaders. Their work included surreptitiously mobilizing many of the 50’000 residents of the city as well as some four dozen staff members of DGAM’s regional office, who worked to preserve our shared culture heritage at Palmyra. DGAM’s Director, Dr. Maamoun AbdulKarim commented, “I think Daesh (ISIS) understood very strongly that if they continued to destroy buildings, they would be attacked by the local community.”

Following ISIS killing of the late famed archeologist and Palmyra Museum Director, Khaled al-Asaad, ISIS destruction continued in rapid succession. Included were Baalshamin Temple, the Sella of Bel Temple (September 2025), and the Triumphal Arch (October 2015). As widely reported, the organization’s main motivation is disapproval of religious sculptures of any sort – and of religious movements that they consider heretical. It also strongly disapproves of paganism, monumental tombs of any sort – and of all figurative religious decoration. Captured ISIS records makes plain that its campaign of destruction was methodical and centrally planned. A special Isis unit tasked with selecting targets and implementing the destruction.

The local community increasingly strongly opposed the wanton ISIS destruction, often risking their lives to end the jihadist iconoclasm. The local citizen’s resistance and public demonstrations prevented more damage to their and our cultural heritage and identity.

In addition, since May 2015 when ISIS invaded Palmyra, DGAM staff in Palmyra quickly and methodically transported approximately 400 full statues or heads of statues as well as hundreds of exhibits, many of which this observer photographed earlier that year. Hundreds of artifacts and transportable statues were packed into storage boxes and moved to secured locations, some as far away as Damascus. The sudden arrival of ISIS terrorists made it impossible to evacuate the larger statues as well as a few exhibited heads of statues fixed on the walls of the museum halls where damage is more extensive.

As DGAM explains to visitors, while ISIS terrorists target treasures and encourage looting and illicit trafficking to fund their operations, claiming that they consider that statues are idols against their ideologies and, consequently, they do not trade with them. But part of the reality is that ISIS could not find many of the artifacts given that DGAM with the help of the local population had already evacuated them.

While some treasured monuments have been destroyed, much of the ancient city’s ruins remain intact. Syria’s antiquities chief Dr. Maamoun Abdulkarim said authorities had been “expecting the worst” from the 10 month occupation of ISIS. But he told the AFP news agency that “the landscape, in general, is in good shape”. Most of the stones from the collapsed Temple of Bel appear to be still on the site. There had been damage to the fence of the city’s medieval citadel, “but it can be fixed. And some stones at the Temple of Baal are still intact.” Dr. Abdulkarim has also announced that the old ruins, located southwest of Palmyra’s residential neighborhoods, were in better condition than he expected. Many of the most important ruins, including the Agora, Roman Theater, and city walls, were only slightly damaged. “The really great news is about the Lion of Al-Lat,” the famous 15-ton lion statue destroyed by IS last July, Abdulkarim said. The limestone statue at the temple of Al-Lat, a pre-Islamic Arabian goddess, dates back to the 1st century BC. Abdulkarim said the broken pieces “could be put back together — we didn’t lose this great statue.”

Once DGAM has UNESCO’s approval, Dr. Addulkarim estimates that Syria we will need five years to restore the structures damaged or destroyed by ISIS. Abdulkarim told AFP. “We have the qualified staff, the knowledge and the research. With UNESCO’s approval, we can start the work in a year’s time.”

So far more many countries have offered archeological sites restoration assistance both in terms of cash and expertise. They acknowledge willingness to work under Syrian direction on DGAM’s prioritized projects.

In addition, several organizations from the UK, Germany, Italy, Japan, China, the USA and elsewhere have also been working the past couple of years to create precise three-dimensional digital models of the threatened archaeological and heritage sites in Syria.

Among the examples, four kilometers outside the marble quarries of Carrara, Italy, robots and other technology are being used to carve from massive stone a 20-foot-high scale reproduction of one of Palmyra’s most famous ancient monuments: a Roman triumphal arch that Islamic State militants razed in October of last year. Next month, the 12-ton replica will be on display at Trafalgar Square in London and then on to New York.

Dr. Alexy Karenowska, Director of Technology at the IDA and Oxford’s One Million Images Project points out that a reproduction can only ever be “second best.” But she added, “The idea is to use this as a way of drawing attention to the fact that reconstruction is underway, and as proof of what technology can do for something that touches all of us.” 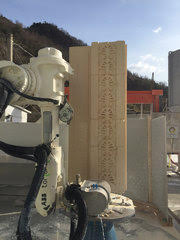 ​A small-scale reproduction of a Roman triumphal arch in Palmyra being carved from a 3D computer model in Carrara, Italy, this month. The original arch in Palmyra was destroyed by ISIS. Credit Institute for Digital Archaeology and Tor Art Photo: New York Times.

As reported in the New York Times on 3/28/2016, expelling ISIS iconoclasts has raised hopes among the organizations and they are pursuing an even more ambitious rebuilding agenda. According to Roger L. Michel Jr., the founder and executive director of the Institute for Digital Archaeology (IDA), which works with Harvard, Oxford and the Museum of the Future in Dubai, “This is the moment we have been waiting for” adding, that “Every time we resurrect from the rubble one of these monuments, it undercuts the message of fear and ignorance that these people are trying to spread,” he said. “If they knock it down, we will rebuild it. If they knock it down again, we will rebuild it again.” This is the same attitude expressed to this observer while traveling around Syria visiting damaged archeological and other cultural heritage sites the past couple of years.

One is reminded that most of Palmyra has been rebuilt throughout history more than once and the “Pearl of the Desert” has suffered far worse destruction in the past. Each time it was restored by the Syrian people after many thought all hope was lost. For example, in 273 AD, Palmyra, led by Queen Zenobia, rebelled against Rome and was totally destroyed as punishment. But it was eventually rebuilt.

This observer harbors no doubt that the Syrian people will restore Palmyra again.

Indeed the process has begun.

Franklin Lamb’s most recent book, Syria’s Endangered Heritage: An International Responsibility to Protect and Preserve (2015) is available in Arabic and English on Amazon or from www/Syrian-heritiage.com. He is reachable c/o fplamb@gmail.com  and www.syrian-heritage.com

Anticopyright: Editorials and articles originated on TMS may be freely reprinted, disseminated, translated and used as background material, provided an acknowledgement and link to the source, TMS: The Wounded Phoenix of Palmyra, is included. Thank you.