11 May 2016 – On Tuesday [10 May] the Bee Informed Partnership, in collaboration with the Apiary Inspectors of America and the U.S. Department of Agriculture (USDA), released its annual report on honey bee losses in the U.S. Beekeepers reported losing 44 percent of their total number of colonies managed over the last year—close to the highest annual loss in the past six years. These losses are considered too high to be sustainable for U.S. agriculture and the beekeeping industry. 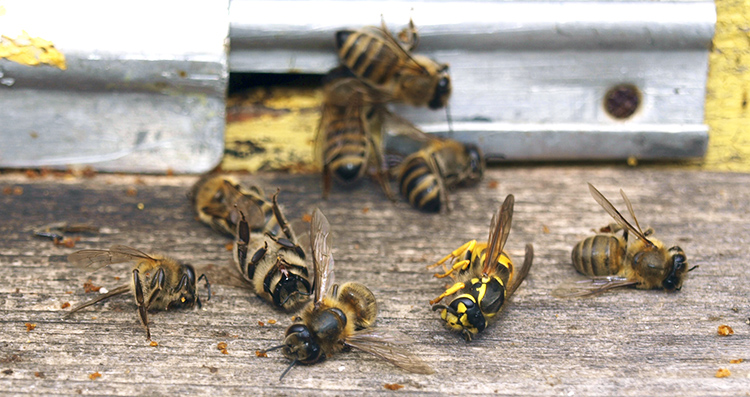 Beekeepers reported losing 44 percent of their total number of colonies managed over the last year—close to the highest annual loss in the past six years. Photo credit: Qypchak / Wikimedia

“These honey bee losses reinforce what sciences continues to tell us; we must take immediate action to restrict pesticides contributing to bee declines,” Tiffany Finck-Haynes, food futures campaigner with Friends of the Earth, said. “The longer we wait, the worse the situation becomes. If we do not suspend neonicotinoid pesticides immediately, we risk losing our beekeepers and harming important ecosystem functions upon which our food supply depends.”

A large and growing body of science has attributed alarming bee declines to several key factors, including exposure to the world’s most widely used class of insecticides, neonicotinoids. States, cities, universities, businesses and federal agencies in the U.S. have passed measures to restrict the use of these pesticides due to delay by the U.S. Environmental Protection Agency (EPA). However, these pesticides are still widely used despite mounting evidence that they kill bees outright and make them more vulnerable to pests, pathogens and other stressors. 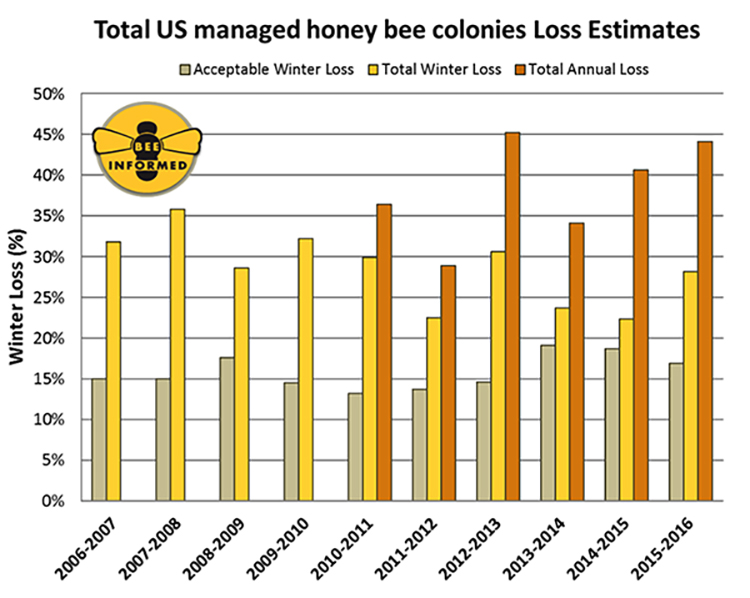 Summary of the total overwinter colony losses (October 1 – April 1) of managed honey bee colonies in the U.S. across nine annual national surveys. The acceptable range is the average percentage of acceptable colony losses declared by the survey participants in each year of the survey. Photo credit: Bee Informed Partnership

In April 2015, the EPA announced a moratorium on new or expanded uses of neonicotinoids while it evaluates the risks posed to pollinators. In January 2016, the EPA released its preliminary pollinator risk assessment for the neonicotinoid imidacloprid and found it poses risks to honey bees.

The EPA is primarily relying on states and tribes to develop pollinator protection plans to address pesticide use, which was an initiative started by the Pollinator Health Task Force, a group established by President Obama’s Presidential Memorandum on pollinators.

This past year, the USDA, a co-chair of the Pollinator Health Task Force, was reported to suppress and silence its own scientists for speaking to the harms of neonicotinoids and glyphosate—an herbicide that is a leading contributor to monarch decline.

“The EPA is passing the buck to states and our regulatory agencies are letting the pesticide industry pull the wool over their eyes instead of seeking solutions,” Finck-Haynes said. “The EPA, USDA and Congress must adopt a federal, unified plan that eliminates the use of systemic pesticides to protect bees and beekeepers.”