EU: Results of Glyphosate Pee Test Are In ‘and It’s Not Good News’

12 May 2016 – Last month, Members of the European Parliament (MEPs) volunteered to take a urine test to see if glyphosate—the cancer-linked weedkiller—is in their system. Forty-eight MEPs from 13 different European Union countries participated in the test, and now the results are in.

According to ELISA test results from the accredited Biocheck Laboratory in Germany: “All participants excreted glyphosate by urine.”

The group noted in a press release of their so-called “#MEPee” test:

On average, the MEPs had 1.7 micrograms/liter of glyphosate in their urine, 17 times higher than the European drinking water norm (0.1 microgram/litre). This means that everyone we tested was way above the limit for residues of pesticides in drinking water.

“Nevertheless all investigated EU-parliament members were glyphosate contaminated. This will show glyphosate is also in the food chain of members of the EU-parliament,” the report states.

Glyphosate, which the World Health Organization’s International Agency for Research on Cancer (IARC) declared a possible carcinogen last March, is the main ingredient in Monsanto’s widely used weedkiller, Roundup. It is also found in herbicides manufactured by Syngenta and Dow.

The Greens conducted the test ahead of European Parliament’s April 13 resolution that opposed the European Union’s relicensing of glyphosate.

The results of our #MEPee test on #glyphosate are in and it's not good news for the 48 MEPs https://t.co/wMUCNhfKBn pic.twitter.com/DyqDO4i6Gj

Despite fierce opposition from European Parliament, countries such as France, Sweden, Italy and the Netherlands, and the 1.4 million people who have signed a petition calling on an EU ban, the European Commission—the executive body of the European Union—reportedly plans to relicense glyphosate for nine years.

According to the Green Party, the European Commission’s latest proposal, which will be voted on May 19, will “plough ahead with a full-fledged approval of glyphosate’s license for nine years.”

“It considers only symbolically if at all the European Parliament’s resolution calling for a very limited scope of approval. Responsibility for the protection of operators and for multiple risks is discharged onto Member States in a non-legally binding manner,” the party said. “We are pissed off that our governments want to allow this poison for another nine years! No politician should have this in his or her body, and not a single citizen either!”

Glyphosate approval in the EU expires at the end of June. The chemical has been the subject of incredible controversy in Europe especially after the European Food Safety Authority famously rejected the IARC’s classification of glyphosate as a possible carcinogen in November.

Agri-business giant Monsanto has also vehemently denied glyphosate’s health and cancer risks and demanded a retraction of the IARC report. 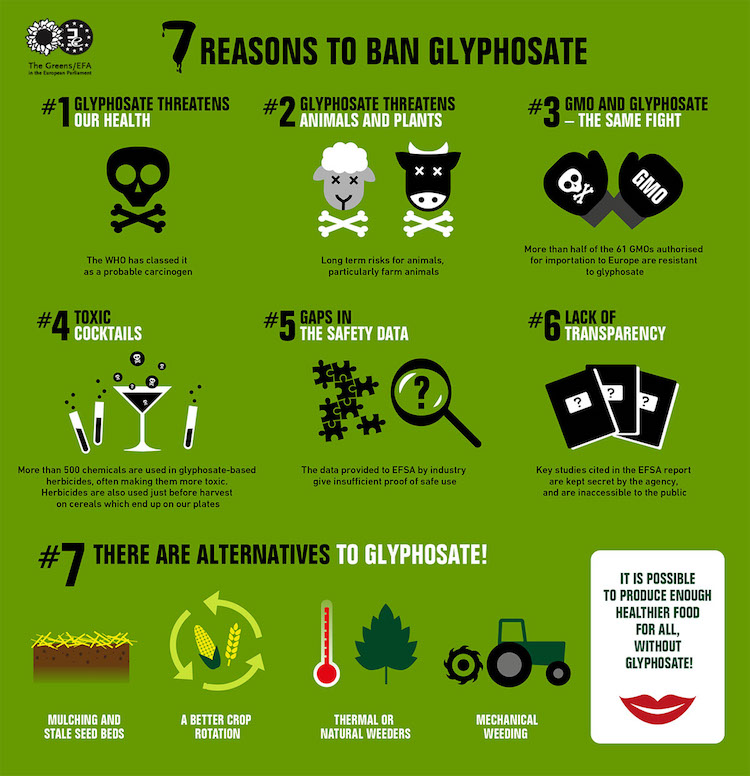 The Green Party’s MEPee test was inspired by a German study “Urinale 2015,” which sampled glyphosate concentrations in urine from more than 2,000 participants.

“The study found that the scale of the glyphosate problem is enormous, with detected concentrations in urine between five and 42 times over the maximum value of residues for drinking water in Europe,” the Green Party pointed out. “No less than 99.6 percent of all citizens who took part in this survey had higher residue levels. This means that virtually all citizens are contaminated with glyphosate.”

A number of other studies have detected glyphosate—the “most widely applied pesticide worldwide”—in feminine hygiene products, everyday food items and, yes, human bodies. A 2013 Friends of the Earth Europe study reported people in 18 European countries have traces of glyphosate in their urine.

Does Glyphosate Cause Cancer?

How Widespread Is the Use of Glyphosate in Our Food Supply?