18 Apr 2016 – The Israeli authorities are furious after a UNESCO resolution stated that the Temple Mount and holy sites in Hebron and Bethlehem are an “integral part of Palestine.” The organization also criticized Israel, “the occupying power,” for planting fake graves in Muslim cemeteries. 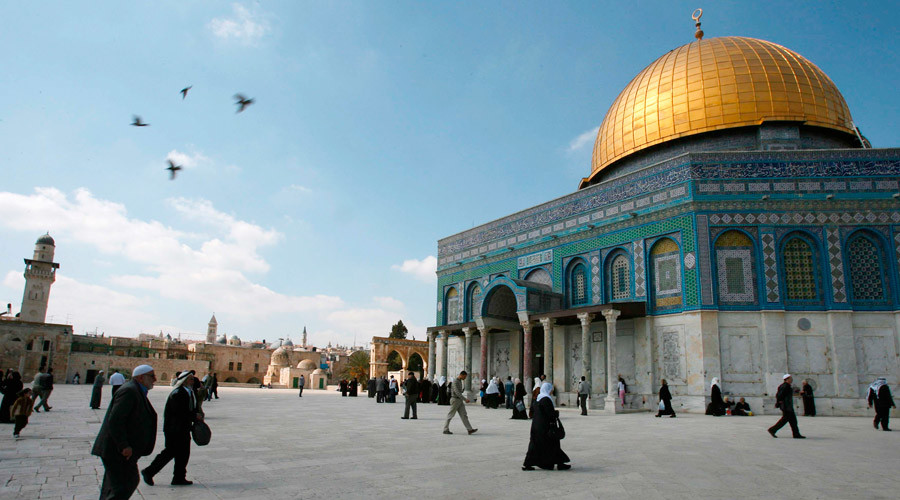 Two tourist destinations, the Cave of the Patriarchs in the heart of the old city of Hebron and Rachel’s Tomb in Bethlehem, are named in the paper as “Palestinian sites.” The draft decision by the UNESCO executive board on occupied Palestine was released April 11.

UNESCO “reaffirms that the two concerned sites located in… Hebron and in Bethlehem are an integral part of Palestine” and “disapproves the ongoing Israeli illegal excavations, works, construction of private roads for settlers and a separation wall inside the Old City of… Hebron, that harmfully affect the integrity of the site,” the statement says.

UNESCO slammed Israeli attacks on Muslims in the Temple Mount, which it only refers to by its Arabic name, Al-Haram Al-Sharif, and its holy site, Al-Aqsa Mosque.

The organization “strongly condemns the Israeli aggressions and illegal measures against the freedom of worship and Muslims’ access to their Holy Site Al-Aqsa Mosque/Al-Haram Al Sharif, and requests Israel, the Occupying Power, to respect the historic Status Quo and to immediately stop these measures,” the statement says.

Al-Aqsa Mosque became the flashpoint for bloodshed in 2015, amid mounting tensions over the holy site, sacred to both Muslims and Jews.

UNESCO called on Israel to stop “banning Muslims from burying their dead in some spaces and by planting Jewish fake graves in other spaces of the Muslim cemeteries.”

The group also criticized “the continuous Israeli blockade of the Gaza Strip,” which causes an “intolerable number of casualties among Palestinian children,” as well as “the attacks on schools and other educational and cultural facilities and the denial of access to education.”

Israeli authorities have reacted with anger to the UNESCO document.

“This is yet another absurd UN decision,” Prime Minister Benjamin Netanyahu said, as cited by Israeli media.

“UNESCO ignores the unique historic connection of Judaism to the Temple Mount, where the two temples stood for a thousand years and to which every Jew in the world has prayed for thousands of years. The UN is rewriting a basic part of human history and has again proven that there is no low to which it will not stoop,” he added.

This is not the first UNESCO resolution that condemns Israel for aggression at holy sites in Jerusalem and the West Bank. In October 2015 the group issued a document which censured Israel for limiting Muslim access to Jerusalem’s Al-Aqsa Mosque compound and reaffirmed that the Cave of the Patriarchs in Hebron and Rachel’s Tomb in Bethlehem are Palestinian sites.

The document was passed by 26 votes to six – those against being the US, the UK, Germany, the Netherlands, the Czech Republic and Estonia.