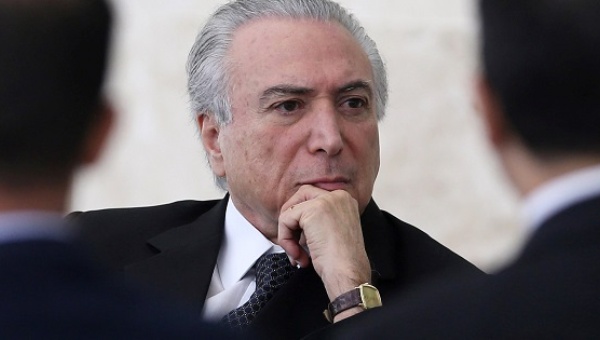 26 May 2016 – Fear that more damning leaks solidifying claims that the plan to remove suspended President Dilma Rousseff was a coup is settling in around the unelected interim President Michel Temer, prompting advisors to suggest a shift of corrupt ministers as political scandal rocks the imposed government just two weeks after being installed, the Brazilian daily Folha de Sao Paulo reported Thursday [26 May].

Temer advisors have reportedly proposed that ministers named in the Operation Car Wash corruption investigations, focused on uncovering bribery and money laundering in the state oil company Petrobras, be moved within a month or directly respond to the legal accusations they face, Folha reported.

The suggestion comes after explosive wiretap leaks this week provided shocking evidence that a key motive of the impeach bid against Rousseff was putting a stop to investigations targeting corrupt officials.

A total of seven of Temer’s interim ministers are implicated in Operation Car Wash, including Planning Minister Romero Juca, who stepped aside this week over a bombshell leak. The then-Senator was caught secretly on tape saying he was talking to military commanders and the Supreme Court to ensure Rousseff’s ouster as part of a plot to halt the fraud probe targeting him and his allies.

A third leak, reported Thursday by Folha, shows that former dictatorship-era politician and president from 1985 to 1990 said that there would need to be “certain conditions” to get lawmakers on board supporting the plan to install Temer as president.

The conversations were all leaked by former state oil executive Sergio Machado, raising concerns within Temer’s ranks that there could be wiretap evidence going public soon that would heap further scandal on the embattled unelected government. According to Folha, Machado has reportedly already passed on more recordings to the Attorney General’s office.

Machado, former president of the Petrobras subsidiary Transpetro, is also a target of the Operation Car Wash investigations.

In two weeks since taking over from Rousseff after the Senate voted 55 to 22 to suspend her for 180 days to face an impeachment trial, Temer has unveiled a staunch austerity agenda with cuts to social spending, privatization plans, and expanded access to Brazil for foreign corporations.

If the Senate, overseen by the Supreme Court, ultimately decides to impeach Rousseff with a two-thirds majority vote after the trial, Temer will be permanently installed as president until 2018.