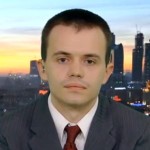 25 Apr 2016 – Brazil is in the midst of a prolonged regime change operation, as documented step-by-step by Pepe Escobar in his articles for Sputnik, RT, and the Strategic Culture Foundation. The author’s intent isn’t to get into the situational specifics of each and every detail behind the US’ techniques, but to provide a general overview of the strategies that are at play and their contribution to Hybrid War theory.

Brazil is an important New Cold War battleground not just because of its institutional multipolarity, but particularly because of its role in China’s One Belt One Road global vision. The Chinese announced last year that they plan to build the Twin Ocean Railroad between Brazil’s Atlantic Coast and Peru’s Pacific one in order to facilitate transoceanic trade between the two BRICS members by enhancing Brasilia’s transcontinental trade capability. Because this mega project is located in the US’ own hemisphere, the “Monroe Doctrine”-obsessed Exceptionalists accelerated their existing regime change plans for Brazil with the intent of overthrowing its government and replacing it with a pro-unipolar quisling.

Many observers are scratching their heads wondering how to properly describe what they’re witnessing in Brazil, and while there’s certainly visible evidence of a Color Revolution, it would be inaccurate to describe it solely through the prism of this definition. At the same token, while it’s been likened to a Hybrid War, it only fits the ‘conventional’ informational/economic aspects of this term, too, and doesn’t really satisfy the regime change perquisites of a phased transition from a Color Revolution to an Unconventional War (or at least not yet). Similarly, while there’s definitely a ‘constitutional coup’ going on, it’s also not entirely this form of regime change, either. Rather, there are elements of all three strategies at play, and they interact in a unique dynamic that might represent the unveiling of a new patterned approach that aims to subvert leading multipolar states. What’s important to point out is that the entire plot was set into motion as a result of valuable intelligence that the NSA had gained about Brazil’s top company and later weaponized into a regime change catalyst, meaning that practically every country in the world is potentially vulnerable to this sort of asymmetrical destabilization.

The key vehicle in exerting pressure on President Rousseff isn’t the Color Revolution movement, itself an outgrowth of the “Cashmere Revolution” and the return of which the author warned about last summer , but the ‘constitutional coup’ attempts that are being orchestrated to remove her from power. It’s worthwhile to remember that these are built upon an “anti-corruption” investigation that, as Pepe Escobar has repeatedly pointed out, are one-sided and only target the ruling party. It was revealed in September 2013 as part of the Snowden Leaks that the NSA had been spying on Petrobras , the company at the heart of the ‘constitutional coup’ scandal, which in turn raises the possibility that the US had obtained ‘compromising’ information on the alleged corruption activities of key ruling party executives and was waiting for the right time to weaponized it.

It shouldn’t be seen as coincidental that the “Car Wash” ‘anti-corruption’ investigation began nearly half a year later in March 2014, which was the run-up to the 6th BRICS Summit in Fortaleza, Brazil that summer. During that major international event, the multipolar leaders committed themselves to creating the alternative financial architecture that would later become known as the BRICS/New Development Bank and officially instituted one year later in Ufa. At the time, “Car Wash” wasn’t big enough to derail any of this, but it also wasn’t meant to be an immediate bombshell. Instead, it can be conceived of as a ticking time bomb that was preplanned to go off at a future date, whether or not Rousseff would have even remained in office by that time. The reader should remember that she barely won reelection that fall, and if she hadn’t, then it would have been the “opposition” that could have been implicated or discretely blackmailed with the threat thereof. 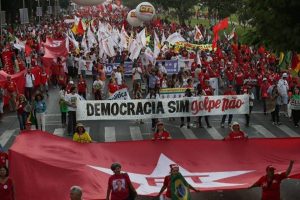 An anti-coup rally in Brasilia, March 2016

After all, “Car Wash” is a one-sided anti-corruption scandal that purposely neglects targeting any opposition parties and is aimed solely at the ruling class, regardless of whichever one they might have been. In the case of Rousseff and her Worker’s Party, they’re targeted for regime change, whereas the Brazilian Social Democracy Party of her 2014 election rival would have been targeted for blackmail in order to keep it in line with American strategic precepts for the country. One way or another, after having initiated the ‘Car Wash” inquisition, the US was going to exploit it however it could in order to attain and then maintain its hold on power over the Brazilian political establishment. With Rousseff winning reelection while the investigation was still ongoing and nowhere near ‘conclusively’ finished, it was inevitable in hindsight that it would be used as a weapon for toppling her government and initiating a ‘constitutional coup’.

Once Rousseff was implicated (most ‘convincingly’ in the court of public opinion) for her alleged involved in “Car Wash”, the embedded pro-American regime change elements in Brazil’s government sprang into action in initiating the ‘constitutional coup’ proceedings against her. By itself and nakedly presented as a one-sided ‘anti-corruption’ inquisition, the ‘constitutional coup’ had no semblance whatsoever of domestic or international ‘legitimacy’, which necessitated a dramatic move in order to ‘justify’ it. This was the role that the nascent Color Revolution ended up playing, since without tens of thousands of people in the street, there could be no pretense of ‘democracy being served’ by her indictment. Instead, the US’ hand in all of this would be even more obvious than during Latin America’s last ‘constitutional coup’ in 2012 Paraguay. Additionally, Brazil isn’t Paraguay – it’s a leading multipolar power and a nation many times larger than its landlocked neighbor, and carrying out a regime change there requires more ‘finesse’ and ‘public relations’ manipulation in Brazil than it ever would in Paraguay.

Therefore, the Color Revolution itself is inconsequential in pressuring Rousseff’s government or enacting any leadership concessions from her whatsoever. The entire regime change operation against her is driven by the ‘constitutional coup’, which itself is being disguised by the Color Revolution that has attracted the ‘normative’ attention of most of the world’s pro-unipolar media. This can be proven by the copious media coverage given to the thousands of people who are protesting against her and rallying around a giant inflatable yellow duck compared to the considerable lack of attention being given to the NSA’s role in catalyzing the entire Petrobras ‘anti-corruption’ inquisition in the first place. Clearly, the reason for this is that the US is engaging in a concerted effort to shift the international dialogue over the issue from the origins of the political crisis to the ‘normative legitimacy’ of Rousseff’s rule, strongly implying that the Color Revolution protesters have somehow invalidated her democratic and legitimate reelection and more than ‘normatively’ compensate for the shady ‘constitutional coup’ dealings that are being employed against her.

A Heightened Risk of Hybrid War

At the moment, it looks like the ‘constitutional coup’-Color Revolution two-step might succeed in removing Rousseff and replacing her with Vice-President Michel Temer, who had actually been practicing his post-coup address to the nation in a recently leaked speech. Should this happen, then there wouldn’t be any reason whatsoever for the US to intensify its regime change operation into a Hybrid War by prompting an Unconventional War, but it might unwittingly happen that Rousseff’s supporters take to arms in the event that she’s overthrown. If this transpires, then the country would definitely be thrown into a low-level Hybrid War, albeit one in which this development uncharacteristically occurs after the US is successful in its mission and not beforehand, which in any case would take a course which is impossible to accurately predict at this time.

However, considering just how beloved the left wing is to millions of destitute people in Brazil and taking a cue from their armed comrades in Venezuela, leftist individuals might form militias in order to protect against any forthcoming coup. Remembering the astonishing rate of crime that already exists inside of the country, it’s foreseeable that anti-coup activists/insurgents could easily procure whatever weapons they might need in order to create a destabilizing stir. Furthermore, UNASUR has hinted that it wouldn’t recognize Rousseff’s possible impeachment, which might grant an added degree of normative support to any militias that agitate on her behalf.

On the other hand, if the regime change process isn’t proceeding apace around the time of the Summer Olympics in Rio and something or another happens to derail it (e.g. the Senate doesn’t vote to continue the impeachment process), then there’s a chance that the US might encourage right-wing terrorism against the government. This would seek to provoke an international incident that destabilizes the Brazilian government even more than it already is, precisely at the moment when it would need the best media coverage that it can get and when it’s most vulnerable to a flurry of unipolar media condemnation against it. Looked at from another angle, if the plot against Rousseff succeeds by that time, with or without the advent of any anti-regime change rebels, then some countries might choose to boycott the Olympics in order to show solidarity with the legitimate government that was illegally deposed of. This wouldn’t change any facts on the ground, but it would be a strong and symbolic statement of support that might encourage whatever nascent armed resistance movement there might be by that time.

Assessing the US’ regime change strategy against Rousseff, it’s evident that the NSA’s findings were used to spark the ‘constitutional coup’ proceedings that have been ‘normatively justified’ by the preplanned Color Revolution (a continuation of the so-called “Cashmere Revolution” of 2014). The protests have thus far not led to any degree of substantial pressure on the government despite their massive size, with the only agency of tangible anti-government force coming from the ‘legal’ inquisition that’s been launched against the Brazilian President. Nothing at this point indicates that the government is threatened by the street activists, although everything points to it being totally destabilized by the “Car Wash” conspiracy against it.

While no discernable Hybrid War traces can be found thus far (as in the author’s regime change definition of this concept), that doesn’t preclude any from popping up in the near future, whether led by anti-government right-wing terrorists or pro-government post-coup insurgents. There’s no guarantee that either will happen, but the possibility can’t be ruled out in general and must be prepared for by both sides. No matter what ultimately happens in Brazil, the regime change scenario currently underway there is emblematic of a new type of subversive interplay between the NSA, ‘constitutional coup’ actors, and Color Revolutionaries, and it might disturbingly foreshadow a coming trend of state-wide destabilization that could soon be rolled out elsewhere against other multipolar targets.

Andrew Korybko is an American political analyst, journalist and a regular contributor to several online journals, as well as a member of the expert council for the Institute of Strategic Studies and Predictions at the People’s Friendship University of Russia. He specializes in Russian affairs and geopolitics, specifically the US strategy in Eurasia.