If Operation Sophia was designed to ‘tackle the root causes’ of the refugee crisis, we need to talk about justice, dignity and freedom for the people of the Middle East.

13 May 2016 – EUNavforMed – or Operation Sophia, to give the gig its more romantic title – is a real success story.  It’s not the “failure” the House of Lords would have us believe in their mean-minded report. EU ships have saved more than 9,000 souls among the poor and huddled masses crossing the Mediterranean, the refuse of Libya’s “teeming shore”. It is a stunning success for the humanitarianism of the EU – an institution which Britain is thinking of leaving.

But such is the immoral nature of our reaction to this catastrophic human crisis that our political masters did not dare to put human lives ahead of tackling criminality when they launched the whole fandango a year ago. Well aware that millions of Europeans were not too keen on rescuing the refugees and migrants drowning in Mare Nostrum (and quite a few, alas, rather keen that these poor folk might expire en route), Dave Cameron and his mates went banging on about the need to hunt down people-smugglers. 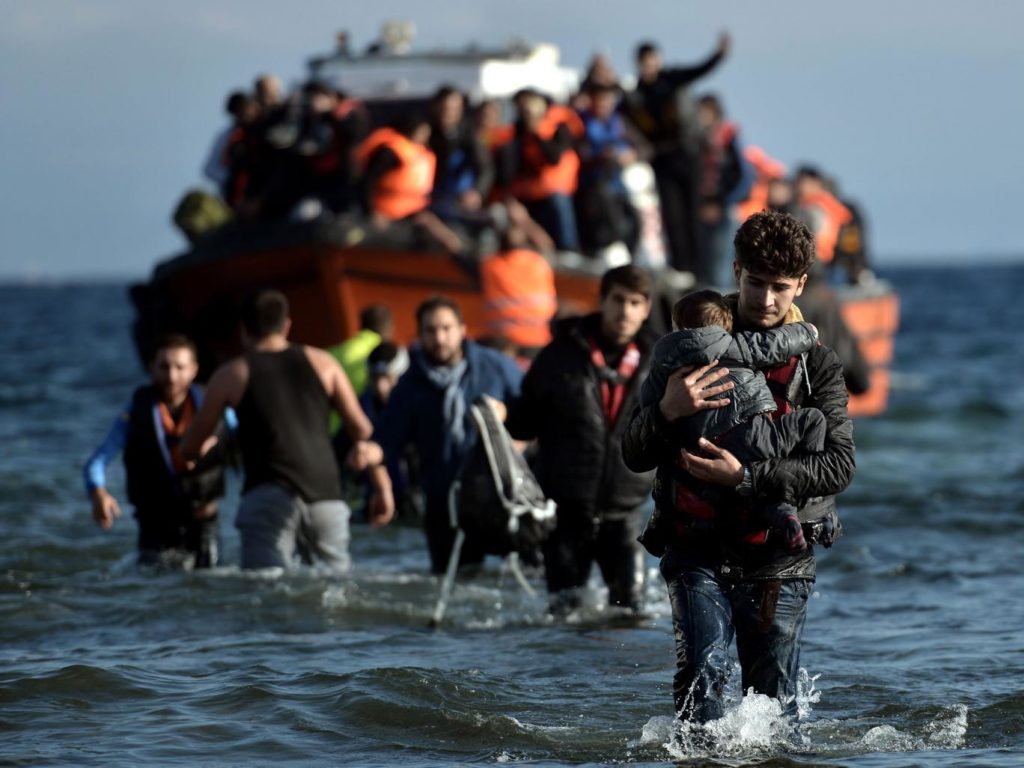 The number of refugees crossing the Med in the first four months of 2014 and 2015 stayed the same at 26,000, but death rates soared.
Aris Messinis/AFP/Getty Images

Personally, I’d rather he hunted down the arms smugglers who are the cause of this bloody tragedy.  But that would mean arresting all kinds of well-off gents from the Gulf, Turkey and, indeed, Libya – along with CIA agents, Russian spooks and quite a few intelligence outfits even closer to home. Impossible.

So having told us this was all about criminality, Dave and the lads have to faff on about driving ‘wedges’ into people-smuggling Mafiosi who are supposedly the real culprits.

Now that we’ve bribed the Turks with a regular annual wodge of greens and easy visas to Europe for their own migrants, rather than the more desperate kind from Syria, Afghanistan and Iraq, the immediate problem is that we can’t bribe the Libyan government in the same way.  First, because it doesn’t exist, thanks partly to our own messing in that tripartite nation, and second because we don’t really have much enthusiasm to send our marines to the shores of Tripoli.

After all, dispatching our commandoes to Arab lands – with or without permission from the relevant dictators – to shoot down the desperados who are packing the coffin ships with human flotsam would immediately bring us into conflict with all kinds of chaps: Isis, al-Qaeda, Nusrah, Boko Haram, freelance militias, Arab government ministers, Gulf allies and Washington cut-outs.

We’d have to use precision bombing and lots of drones and then, before we knew it and as per usual, we’d be blowing up the camps, clinics and hospitals used by the refugees as well as the gunmen and smugglers before the homeless, ‘tempest-tossed’ migrants even dipped their toes in the sea.

It’s highly instructive that one of the most recent EU puffs for Operation Sophia puts the rescue of human life first on its list of mission objectives – which is where it should be – and only then waffles on about smugglers.

There’s one killer line at the end, however, that hits us old Middle East hands like a whiplash. The purpose of the whole EU project, we are told, is to “tackle the root causes” of the refugee tragedy.

Surely not? For that would mean we’ve got to talk about justice, dignity and freedom for the people of the Middle East – which means we’ve got to redesign our policies towards Islam, history, Arab dictators, Israel, the Palestinians, the Kurds.

We may even have to re-examine our views of Europe, even of the EU. And if we’re going to set sail across the Mediterranean with that kind of ambition, we’d better follow the example of Admiral Lord Nelson who held his telescope to his blind eye at the Battle of Copenhagen and remember what he supposedly said: “I see no ships!”