Nothing grows forever. The myth the economy can is destroying the biosphere.

16 May 2016 – The present human condition is predicated on one of the biggest lies ever – that the economy can grow indefinitely. In a self-serving logical contortion, economists in service to the oligarchy measure the well-being of a society by how fast the economy grows, with little regard to the state of natural capital, human inequity, the welfare of ecosystems and other species, or the extent to which people and society are happy. Natural capital is defined as Earth’s stocks of natural assets including ecosystem services which make all life possible, which is unmeasured and thus undervalued by indices of economic growth. 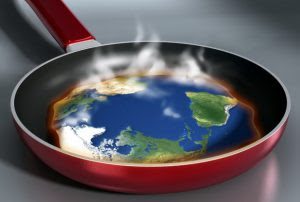 Economic growth is destroying the biosphere.

Measures such as Gross Domestic Product utterly fail to tie increases in economic output to human and natural well-being. Spending on militaristic drone attacks and the rich’s conspicuous over-consumption are equated with social expenditures to meet basic human needs. Clearcutting old-growth forests for toilet paper is of equal worth as providing homes and food for the poor. Ravaging Earth’s last natural ecosystems for every last drop of oil is deemed economically beneficial (despite being terribly inefficient as externalities remain unpriced), while we are told restoring natural ecosystems is unprofitable because of large discounting of future benefits.

Living as if Earth’s nature has no worth other than to be liquidated for consumption degrades ourselves and ecosystems, and can only end in utter ruin as first society, then the economy, and finally the biosphere collapses. It is blatantly obvious that infinite growth on a finite Earth is impossible. Yet we run our economy with this goal.

Economic growth is worshiped as if it were holy and divine, rather than acknowledging that growth can come at enormous economic, social, and environmental costs. There is little understanding of ecological overshoot and the limits to growth, as we seek ever more material possessions at the expense of all else, systematically degrading not only our habitat, but also our future resource base and potential for broad-based community advancement. Growth appears to be benign and pleasant, iPhones and foreign travel are intoxicating, yet perpetual economic expansion comes at an unknown price whose deleterious impacts sneak up on you. Such is the nature of exponential growth. The exorbitant costs of an exponentially growing economy are best illustrated by imagining a pond whereby the extent of lily-pad coverage doubles in extent every day, on the 30th day fully covering the water. On which day is the pond half covered? When is it a 10% covered? We shall return to this question.

By falsely equating exponential growth with societal well-being, capitalism may well be irredeemable. Its foundational idea of people coming together in markets to exchange their surplus has been bastardized to suggest that creating something of worth and selling it is the same as every manner of speculative financial trickery. Yet for markets to serve human’s and nature’s well-being, there are some basic out-right lies that need to be addressed now.

Firstly, growth cannot fully measure economic well-being; we need a richer measure that determines the extent to which economic activity is sustainable and widely beneficial. A much richer measure is the rate of economic growth per unit of natural capital (drawn down or replenished), and by the extent to which economic advancement is equitably shared. Such a truly green economy is said to be at a steady state, whereby both population and consumption are stable at a sustainable level. How dense are we to not understand that Earth is everything, and that without ecology there can be no economy?

Given the current state of ecological overshoot – as terrestrial ecosystems, climate, water, oceans and biodiversity are collapsing – achieving a steady state economy would require decades of degrowth and redistribution of wealth. Urgent measures would have to be taken to provide incentives that cap both population and disparities in consumption, even as aggregate draws upon natural capital are reduced to below replacement levels to allow for decades of ecological renewal. 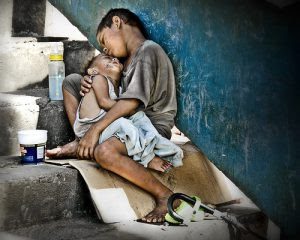 Other times and cultures pre-industrial capitalism have understood the need to build circular economies that sustain and regenerate natural capital. Indigenous Amazonians invested in the future by planting islands of useful species in the savannas, which they returned to decades later for sustenance, leading to present day ecosystems mistakenly called wilderness. The pioneer homesteading culture’s use of animal manure to replenish soil on small holdings was particularly efficient in terms of using waste to replenish the soil, albeit it was most often practiced on stolen land.

It is possible to live in a manner where the future is not by design degraded by overusing natural capital. Imagine a world where advancement is equated with maximizing the well-being of all humans, indeed all life. Where there are guarantees that there will be more tomorrow than there is today. Imagine an economy concerned primarily with broad-based community advancement that also focused upon efficiency, conservation, equitable sharing, and increasing natural capital; rather than simply always more economic throughput regardless of waste streams and diminishment of future development potential.

I consider myself a deep ecologist, yet I have taken a job on Wall Street. I have come to realize that environmentalism cannot seek the necessary changes in isolation; we must engage with the means of production and seek to advance a vision of sustainable development that regenerates natural capital and meets all of humanity’s basic needs. This is not some unattainable communist nirvana. It is a democratic, steady state economy whereby our means of livelihood don’t needlessly pull down the biosphere. Those that are smart and hardworking will have more, but not ridiculously so, to the detriment of others and Earth.

It is basic Systems Biology 101 that perpetual growth is a positive feedback that at some point must by definition destroy the underlying system. In a very short period of a few centuries human industrial growth has rapaciously stripped land, air, water, and oceans of their life-giving ecosystems in the name of economic development. Modern day sooth-sayers called economists chant meaningless mumbo-jumbo endorsing brazen stripping of natural capital as necessary to feed ever growing human populations, while hundreds of millions are stripped of their land, their natural ecosystems destroyed, and left abjectly destitute; to in sum create more wealth for the already uber rich. Such is modern day capitalism.

Asked to explain how the loss of primeval naturally evolved old-growth forests, ocean fisheries, fertile soil, and wetlands will be handled as destroyed by industrial capitalism; we are told by free market advocates with a great deal of earnestness that an invisible hand will guide substitution. We are assured that an atmosphere can be geo-engineered, forever digging ourselves deeper into ecological overshoot. Yet ecologists know with certainty there are no substitutes for water, soil, food, and air; and that a biosphere can never be engineered. And that sustainability on a living Earth means an end to the digging.

The industrial economic growth mirage is the greatest economic bubble ever and can only end in wanton collapse of ecosystems and eventually the biosphere. Before we get there we are set to endure brazen authoritarian demagoguery that rolls back centuries of human advancement, plays us off against each other, and falsely attributes economic decline to regulations upon enterprise. We fail to understand the real source of economic decline is the underlying resource scarcity, ecosystem loss, and human predation found in an economic system devoid of ethics, ecologism, and basic human decency.

For any chance at redemption, capitalism must immediately forswear growth as the measure of economic well-being. And a price must immediately be placed upon carbon and other externalities which are social and environmental costs not factored into production. This is not rocket science, it is Economics 101, yet again and again assigning a price to ecological degradation which is talked about academically but not put in place practically. Even given these reforms, it is questionable whether capitalism’s gross objectification of people and nature can be overcome. Yet without embracing the idea of a steady state and pricing the loss of natural capital as a start, industrial capitalism is an assured death-wish. 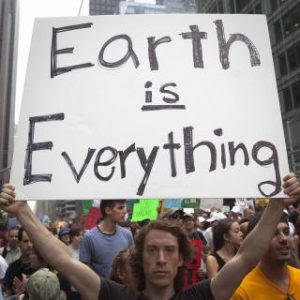 Earth is everything. Without ecology there can be no economy.

Humanity has become little more than a yeast colony in a petri dish gorging upon a limited resource base, which will ultimately collapse when gone. We are so fucking stupid, how do we fail to recognize that we are one with nature, particularly animals – who have mouths, and eyes, and reproductive organs, and feel pain just like us – yet somehow we feel superior? How have we come to believe that we are not of, and utterly dependent upon, the naturally evolved world? Why do we have to needlessly destroy our habitat for sustenance?

Think of how to bridge the present environment and economic divide, and work to make sustainability a reality. It is crucial that green ideas engage with and transform the means of production and change it from within, or capitalism will have to be overthrown, a highly risky venture. If we don’t want humanity’s last days to be spent in slavery and economic misery, we will price environmental decline and measure economic growth by the amount of equitable advancement per unit of natural capital. Otherwise we face biosphere collapse and the end of being.

Note exponentially growing lily-pads doubling in extent daily cover half of the pond on day 29, and cross the 10% threshold whereby a problem may be identified on day 26, with only four days until fully covered. Exponential growth will bury you without revealing itself until the very last minute, when it is too late to respond. Such is the pernicious myth of perpetual economic growth.

Dr. Glen Barry is the President and Founder of EcoInternet. He is recognized for contributions to the environmental movement by communicating the severity of global ecological crises and actively organizing with others sufficient responses.