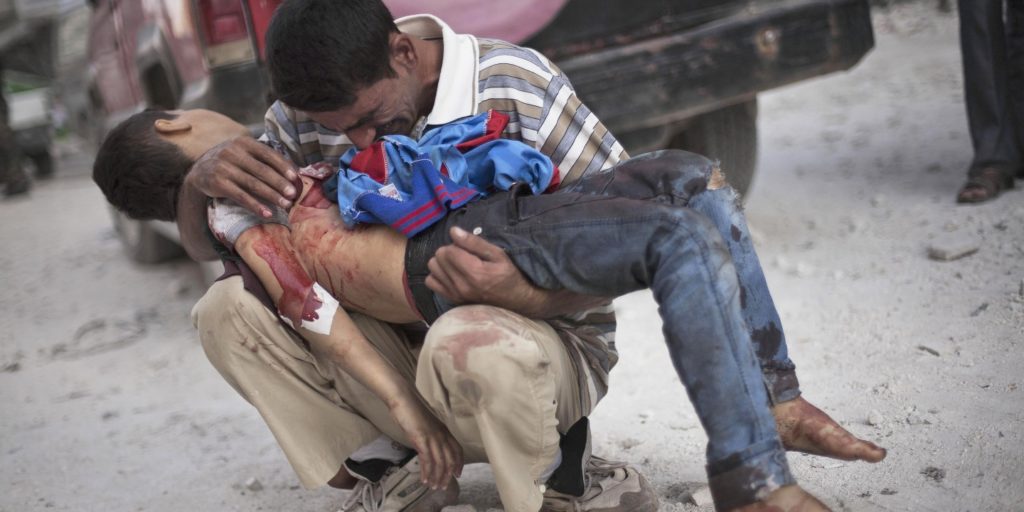 A Syrian man holds the body of his son, killed by the Syrian Army, near Dar El Shifa hospital in Aleppo on Oct. 3, 2012.

19 May 2016 – The primary factors driving Syrian youths toward extremist groups are deprivation and personal trauma stemming from five years of civil war in the country, according to a report from International Alert, a British organization. Titled “Why Young Syrians Choose to Fight,” the report is based on interviews with 311 Syrians living in northern Syria, Lebanon, and Turkey.

The prime drivers for extremism were personal experiences of trauma, loss of economic and educational opportunities, and a desire for vengeance against the Syrian government, according to the British NGO. The Syrian respondents said these practical factors, rather than ideological beliefs, led many young men to support groups like Jabhat al-Nusra and the Islamic State.

With unemployment reaching 90 percent in some areas of the country and no end in sight to the conflict, many of those interviewed said that a simple need to survive drove many youths to join with militants, whether they agreed with their ideology or not. “The economic situation for young men, inside Syria, is bad,” said one respondent living in the Syrian province of Idlib. “They are only able to survive by joining a military faction either to receive salaries or for robbery and waylaying.”

Another individual interviewed for the report, issued earlier this month, told the story of an 18-year-old who had been fighting with a Free Syrian Army unit that was unable to even maintain a supply of bullets. Despite disagreeing with the group’s ideology, the young man later joined Jabhat al-Nusra after it offered him bullets as well as a salary to continue fighting the government.

The civil war that started in 2011 following a government crackdown on peaceful protests has now claimed up to 470,000 lives, according to some estimates. Out of a pre-war population of 22 million, over 11 percent of the Syrian population is now believed to have been killed or injured. Average life expectancy has plummeted from 75 to 55 years. Millions more Syrians have become refugees in neighboring countries or in Europe.

These staggering numbers have left few Syrian families untouched, and have had a profound psychological impact on those left behind. Many of those interviewed in the report said that a desire to avenge atrocities drives many Syrian youth into the arms of extremists, particularly Jabhat al-Nusra, the Syrian branch of al Qaeda. Established by al Qaeda leader Ayman al-Zawahiri after the 2011 uprising against Syrian President Bashar al-Assad, Jabhat al-Nusra is widely viewed as one of the most effective fighting forces on the ground against Assad’s regime.

“Many Syrians want to get revenge against the regime for destroying their families, houses, lives and everything else,” one Syrian, now living in Turkey, told the researchers. “Jabhat al-Nusra actually fights the regime and now offers the best chance to get that revenge.”

Syrians interviewed overwhelmingly cited practical rather than ideological reasons for joining militant groups. “Belief in extreme ideologies appears to be — at most — a secondary factor in the decision to join an extremist group,” the study stated, noting that “religion is providing a moral medium for coping and justification for fighting, rather than a basis for rigid and extreme ideologies.”

Many young Syrians cited religious belief as something that obligated them to “defend their country” and “defend oppressed people” from the Syrian government. A young man in Aleppo told researchers that Syrian youths also became more religious after experiencing abandonment by other Arab and Islamic countries, as well as the sectarian policies of the Assad regime. Simple existential fear also led to increasing religious conservatism, he added: “Because of the ongoing shelling, youth became more religious for fear of sudden death.”

Amarnath Amarasingam, a fellow at George Washington University’s Program on Extremism, says the study’s findings comport with his own research. “Many Syrians have told me that the conflict is in many ways all-consuming, so if these youth want a future inside Syria, to go to school again without interruptions, build a family, and so on, it means contributing to bringing the war to an end,” he says. The spirit that animated the 2011 uprising against Assad still motivates many young Syrians, Amarasingam says, adding that a desire for political change among youth has increased after years of government brutality.

But for many others, taking up arms has been a matter of simple survival. “Our focus on jihadism means that we tend to ignore the many other youth who, out of sheer necessity, picked up a weapon to protect their villages from bombs dropping from the sky,” Amarasingam says. “I’m not sure what else we expect them to do at this point.”