As of May 15, 2016, according to Save the Children and an assortment of UN agencies and NGO’s, nearly 7 million people are displaced within Syria, half of them are children and more than two million of the youngsters are at risk of becoming ill, malnourished, abused, or exploited. In rural areas of Damascus one in 20 children is severely malnourished with 14 per cent classed as acutely malnourished. The charity’s chief executive Justin Forsyth recently told the UK Independent recently that “There is no room for delay or argument: Syria’s children must not be allowed to go hungry!”

Through no fault of their own, many civilians caught up in the conflict have been left unable to produce or buy enough food, and the food production industry has collapsed. Most of us living in this region have heard accounts of Syrian children forced to live off nothing more than lentils or bread. Food shortages are leading to skyrocketing price increases with the cost of the most basic supplies having increased by 100 per cent or more. Millions of children have been forced to quit school.

One inexcusable action that is today targeting Syria’s children, even if inadvertently, are the US economic sanctions against the country’s leadership by the US Treasury Department and its enforcement arm, the Office of Financial Assets Control (OFAC).

OFAC has long and zealously targeted its two nemeses, Syria & Iran with ever harsher economic sanctions that have damaged both economies, caused rampant inflation of consumer goods prices, while all but choking off economic development.  The victims of the draconian regulations are not either country’s leadership but rather those most in need, especially the children in war torn Syria.

OFAC regulations to stop banks from providing services to charities and others that do business in targeted countries like Syria are in fact having an unanticipated serious impact on relief efforts. This according to more than a dozen interviews with aid directors, senior bankers, lawmakers and industry experts interviewed by Bloomberg.

More than half of the 170 local and regional banks surveyed by the World Bank last year reported losing their relationships with global partner banks over fear that OFAC will come after them as it has done in hundreds of cases.

Banks are also closing accounts for hundreds of money-transfer firms that work with charities and that provide lifelines to migrants and their families in the $582 billion remittance business. Mark Carney, governor of the Bank of England and chairman of the Financial Stability Board, has warned about the “financial abandonment” of entire countries.

According to Bloomberg, what started as a reaction to Sept. 11 has morphed into a dilemma with implications for governments, banks and hundreds of millions of people struggling to survive in nations with little financial infrastructure.  U S and western law enforcement agencies have made tracking the global flow of money a key tool in their fight against al-Qaeda, Islamic State, and Hezbollah as well as Syria and Iran. 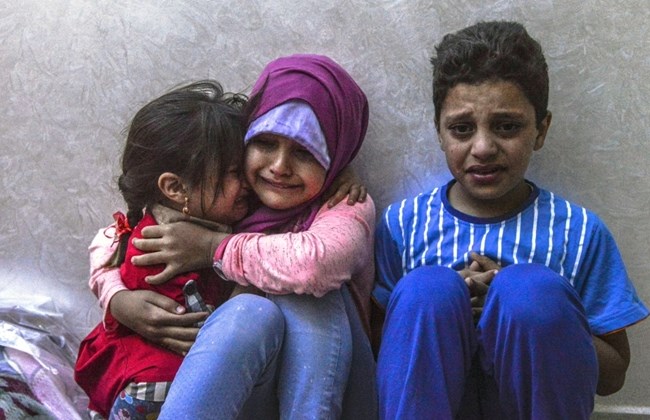 A couple of examples.

In southern Turkey, Islamic Relief has delivered 150 million dollars of aid to 6.5 million Syrian refugees, most of them children. Even though it had previously partnered with the United Nations and Western countries in providing aid to more than 30 countries over the past 32 years, it is experiencing repeated delays in getting food to Syria children after banks refused to transfer funds to pay for any supplies that might be sent to Syria.

Last year, former UK Ambassador to Lebanon, Ms. Frances Guy was close starting a major program to feed hundreds of displaced children and others in war-torn Syria. Guy, the Middle East head of Christian Aid, had secured funds and found partners. But there was one obstacle she couldn’t overcome: The charity’s bank, Standard Chartered Plc, refused to transfer $50,000 to put the project in motion.  According to Ms. Guy “The unintended consequence here is that aid is being denied to people in desperate need of assistance.  If this continues, it is possible to see a situation where Syria children and those most in need of humanitarian aid are least able to access it.”

Dozens of other charities wanting to help vulnerable Syrians are also being blocked.  After U.S. authorities levied billions of dollars in fines against Standard Chartered, HSBC Holdings Plc and BNP Paribas SA for violating sanctions on Syria, banks have been unwilling to send money and have even shut accounts. Charity Finance Group, a London-based trade association with 1,350 members, says 200 to 300 charitable organizations have had their accounts canceled or faced long delays and rejections of money transfers.

In early 2016, the British government pledged 2.3 billion pounds ($3.3 billion) to ease the suffering of Syrian refugees and improve the lives of those still in the country. According to Save the Children, which is sponsored by 41 churches in Britain and Ireland, much of that money won’t help those in need if charities, major conduits for delivering government aid, can’t transfer cash.

Some U.S. banks have refused to transfer cash for Oxfam the global anti-poverty organization founded 74 years ago to relieve famine in Greece. Such obstacles are taking a toll in places where aid is needed most. This winter, Christian Aid made arrangements to deliver blankets to displaced people in Iraq, but by the time the money came through it was almost spring. Scores of charities are seeing donations from supporters held up by banks and online payments-processing companies.

The U.S. has prosecuted several charities over the past decade. In 2009, five leaders of the Holy Land Foundation for Relief and Development, once the largest Muslim charity in the U.S., were imprisoned for funneling  dollars to the Palestinian group Hamas.

The Obama administration and other G-7 leaders are increasingly employing sanctions to punish nations such as Syria, Russian and Iran. That’s led to an explosion of new standards and regulations determining what banks can and can’t do when serving legitimate charities.

Unsure which of countless OFAC rules might apply to a simple banking transaction, increasingly banks are closing charity accounts to avoid any possibility of an OFAC fine. For banks asked to help transfer fund to set up a hot meals field kitchen for Syrian children, for example, the benefit to the banks are not worth the risk of crossing OFAC.

OFAC urges bank to play it safe and avoid risks. The de-risking advised by OFAC continues to intensify among banks globally after the U.S. Justice Department filed a criminal charge in 2012 against Standard Chartered for moving millions of dollars through the financial system on behalf of sanctioned Iranian entities. According to Bloomberg, the bank has paid almost $1 billion to settle actions brought by the federal government and New York State. Also in 2012 HSBC bank was fined 1.9 billion after being charged with violating sanctions laws.

An idea to somehow lessen some of the harsher OFAC regulations seen as targeting charities was offered recently by some industry lawyers that represent major lending institutions. The plan would be to create a sort of safe harbor where banks could avoid punishment if any money inadvertently ended up in the wrong hands, as long as prescribed due diligence measures were followed. OFAC quickly rejected this idea.  Jennifer Fowler, assistant secretary for terrorist financing, affirms that the US government is not going to roll back any restrictions, insisting that “We have these rules in place to protect our financial system.”

One solution could perhaps be for the UN and its specialized agencies to get involved and take advantage of an OFAC regulation exemption.  But this idea is complicated by OFAC’s refusal to permit humanitarian funds transfers to Syria except those made, pursuant to section 5420513, and done by United Nations organizations or its contractors. Even then, the general license prohibits any blocked entity from touching the funds, setting up additional compliance fears for the banks involved and their unwillingness to risk yet another mega-fine from OFAC.

The Obama administration acknowledges that closing the accounts of clean charitable organizations is a problem.  The US Treasury Department has been informally passing the word to U.S. and foreign banks that they won’t be indicted for innocent mistakes.

But few if any financial institutions are likely to be much convinced given OFAC’s record.

Consequently, much needed food aid for Syria’s most vulnerable will likely continue to be blocked.

Anticopyright: Editorials and articles originated on TMS may be freely reprinted, disseminated, translated and used as background material, provided an acknowledgement and link to the source, TMS: U.S. Financial Regulations Increase Starvation among Syria’s Children, is included. Thank you.