Fifty-One Foreign Service Officers Can’t Be Wrong–Or Can They? More Bombs and Less Talk on Syria 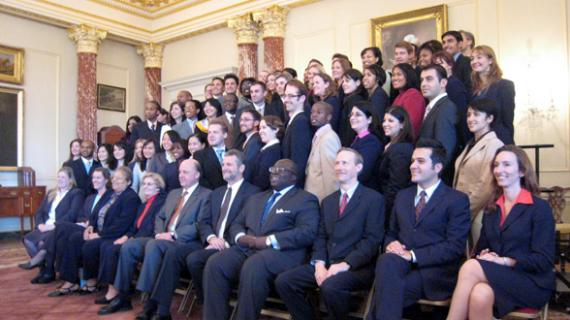 21 Jun 2016 – It is ironic that fifty-one U.S. State Department employees, perhaps overly-generously dignified in the media with the title of “diplomats,” have come out in favor of removing a foreign head of state by force. Detailing their opposition to the status quo, the signatories submitted a dissent memo through established Foreign Service channels. The document itself is classified, even though the New York Times and the Wall Street Journal clearly have obtained copies, presumably leaked to them by some of the dissident officers.

The signatories have reportedly demanded “targeted air strikes” and the “judicious use of stand-off and air weapons which would undergird and drive a more focused and hard-nosed U.S.-led diplomatic process” to bring down the al-Assad government. They justify their dissent by arguing that “The moral rationale for taking steps to end the deaths and suffering in Syria, after five years of brutal war, is evident and unquestionable. The status quo in Syria will continue to present increasingly dire, if not disastrous, humanitarian, diplomatic and terrorism-related challenges.”

The memo describes the Syrian government’s alleged barrel bomb attacks on civilians “the root cause of the instability that continues to grip Syria and the broader region. Crucially, Syria’s Sunni population continues to view the Assad regime as the primary enemy in the conflict. Failure to stem Assad’s flagrant abuses will only bolster the ideological appeal of groups such as (IS), even as they endure tactical setbacks on the battlefield.”

Based on the media leaks though without having seen the actual document, one might nevertheless reasonably conclude that the authors of the memo clearly see Bashar al-Assad as the fons et origo of all the evils currently prevailing in Syria. The intention is to use military force to compel al-Assad to negotiate seriously to dismantle his own government, himself included, a blunt approach that has not necessarily worked very well elsewhere in recent memory. In fact, it has not worked at all. And the assertion that al-Assad is the major problem is, of course, questionable, ignoring as it does ISIS. The memo conveniently leaves out of the reckoning the U.S. role in destabilizing the entire region by invading Iraq and also pushing for regime change in Syria as early as 2003 since that would presumably implicate the signers in counterproductive policies. The Syria Accountability Acts of 2004 and also of 2010, like similar legislation directed against Iran, have resulted in little accountability and have instead actually stifled diplomacy. Congress sought to punish Syria with sanctions for supporting Hezbollah in Lebanon and for its links to Tehran, making any possible improvement in relations problematical. The 2010 Act even called for steps to bring about regime change in Damascus.

Nor is there any consideration of what most Americans might well want to see come out of a new military intervention in the Middle East. Specifically, as Syria in no way threatens the U.S. what is the actual United States national interest in toppling the government in Damascus, apart from some fantastical messianic desire to bring about a peaceable kingdom in the heart of the Arab world through the deployment of American military power. The U.S. would be launching cruise missiles against targets in a country with which Washington is not at war. And being able to bomb Syria does not necessarily mean that Washington will be able to dictate what happens next. Does no one at the State Department remember what happened in Iraq?

The memo also apparently does not address what might happen to the majority Syrian population loyal to the government if and when the regime were to fall to the “rebels.” Attacking and weakening the Syrian military, the presumed target of air attacks, would only make easier a post-al-Assad transition into something even more toxic. Many observers believe that the most radical elements would quickly overpower the alleged moderates that the United States perhaps erroneously believes that it is supporting, leading to even more atrocities directed against religious non-conformists and minority groups. This would include the country’s dwindling number of Christians, who overwhelmingly support the al-Assad regime.

Now consider for a moment who might have been involved in writing this memo. The authors are described by the newspapers that obtained copies of the memo as “mid-level.” That means they are products of the non-diplomacy diplomacy of the George W. Bush and Barack H. Obama presidencies, when the recurrent negotiating tactic in dealing with other countries has almost invariably started with threatening the use of force followed almost immediately by the dispatch of several carrier groups. They probably believe as Madeleine Albright once put it, that we Americans are the indispensable nation, we “see far.” Some of the signatories are undoubtedly Bush era believers in American exceptionalism and global leadership exercised at gunpoint who believe intervention is a national imperative while the Obamaites no doubt see their role as humanitarian, helping oppressed and endangered people of the world who are striving to be free. Both views are delusional from every point of view and do not consider what the people in the countries most affected by American “benevolence” might actually want.

So in short, the ideologically driven signatories probably don’t know a whole lot about traditional diplomacy and would be well advised to read up on Hans Morgenthau’s Politics Among Nations before they open their mouths because overthrowing established governments has consequences, an issue largely avoided by the drafters of the memo as they make no suggestions about what might happen or what must be done after al-Assad and his government disappear.

And then there is the rather embarrassing issue of who the enemy actually is. The suggestion that ISIS is empowered by al-Assad’s survival is a bit of a stretch as the Syrian government and its allies Iran, Hezbollah and Russia are bearing the brunt of the fighting against it and also against al-Qaeda proxy al-Nusrah. And if there is an actual American interest in the conflict it would be to work with those who are enemies of ISIS instead of so-called friends like Turkey and Saudi Arabia that are actually enabling the group.

Of course, willful ignorance about reality is not very important when one has a career to nurture. Can it be that the fifty-one signatories have carefully read the Washington Post and figured out that Hillary Clinton will be our next president? She has promised just what the letter writers are suggesting, a U.S. controlled no-fly zone and aggressive steps that will lead to the removal of al-Assad. As apparent adherents to the Victoria Nuland school of Foreign Policy where one overthrows a government, arranges for new leaders and then threatens concerned neighbors with reprisals, the signatories should fit in quite well with the Clinton regime’s vision of peace through military dominance.

Or if Nuland is not to one’s taste there is also former Obama Ambassador to Syria Robert Ford. The Times, perhaps characteristically, interviews two “experts” on Syria, ex-Ambassador Robert Ford and Andrew Tabler of the Washington Institute for Near Eastern Policy (WINEP). While Ambassador to Syria Ford deliberately sought to provoke the government by meeting with opposition leaders and making public demands for greater democracy. Though his role as ambassador was actually to support American interests, he instead interfered in Syrian politics, speaking openly in support of anti-regime protesters while serving in Damascus in 2010. On one occasion he was pelted with tomatoes and was eventually removed over safety concerns before resigning in 2014 over his demands for a “tougher policy” in Syria. Now he is selling the same kool-aid, regularly appearing on television to urge military action against al-Assad. Tabler, who speaks about frustration over the current Syrian policy, is a standard issue neoconservative. WINEP is a spin-off from the American Israel Public Affairs Committee (AIPAC).

And then there is the small matter of Russia, which is increasingly promoted as the enemy of choice to sustain the threat narrative that excuses American interventions worldwide. The memo indicates that the signatories are not “advocating for a slippery slope that ends in a military confrontation with Russia” even though that is precisely what they are promoting. What would happen when sophisticated Russian air defenses in place in Syria shoot down an attacking U.S. warplane? Russia has indicated that it is willing to consider supporting the replacement of al-Assad as part of an eventual peace settlement but it has also insisted that there has to be stability by way of a transition that permits a recognized government to stay in place to avoid the type of anarchy that would guarantee an ISIS takeover. Apparently the 51 “diplomats” who have been unable to practice much diplomacy in the real world somehow believe that bombing the Syrian government can be accomplished with Moscow sitting idly by, too terrified by Washington’s show of force to respond. It would be a mistake to think that.

It is interesting to note, per the New York Times article, that a reluctant Pentagon has been engaged in pushback against the advocates of deeper involvement in Syria. As ever, it is the Foggy Bottom’s non-combatants with no skin in the game who are the fiercest chair-borne warriors. What the signatories to the memo appear to sidestep is the inevitable conclusion that their recommendations are a reversion to George W. Bush foreign policy at its most pig-shit ignorant. But perhaps it is all old wine in new bottles, particularly if one accepts that the memo might actually be an application letter to join the hawkish Hillary Clinton foreign policy team. Bomb al-Assad to make him agree to our terms. Ignore Russian interests. Don’t worry, it will all work out.

Phil Giraldi is a former CIA Case Officer and Army Intelligence Officer who spent twenty years overseas in Europe and the Middle East working terrorism cases. He holds a BA with honors from the University of Chicago and an MA and PhD in Modern History from the University of London. In addition to The American Conservative, where he has been a contributing editor for nine years, he is currently Executive Director of the Council for the National Interest.