The War on Weed Is Winding Down – But Will Monsanto Be the Winner? 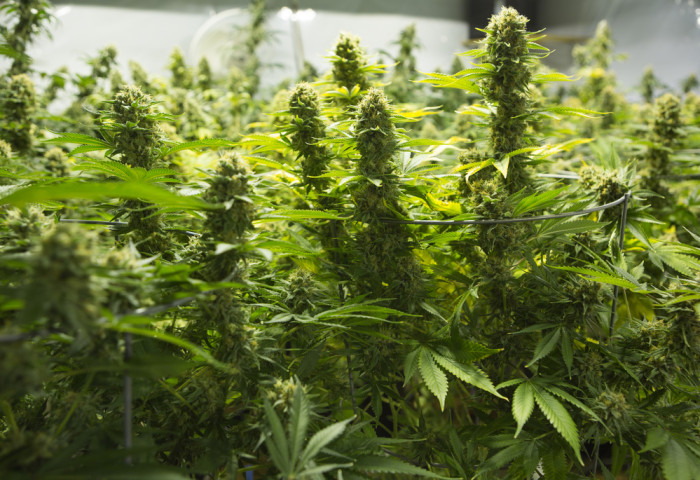 The war on cannabis that began in the 1930s seems to be coming to an end. Research shows that this natural plant, rather than posing a deadly danger to health, has a wide range of therapeutic benefits. But skeptics question the sudden push for legalization, which is largely funded by wealthy investors linked to Big Ag and Big Pharma.

23 Jun 2016 – In April, Pennsylvania became the 24th state to legalize medical cannabis, a form of the plant popularly known as marijuana. That makes nearly half of US states. A major barrier to broader legalization has been the federal law under which all cannabis – even the very useful form known as industrial hemp – is classed as a Schedule I controlled substance that cannot legally be grown in the US. But that classification could change soon. In a letter sent to federal lawmakers in April, the US Drug Enforcement Administration said it plans to release a decision on rescheduling marijuana in the first half of 2016.

The presidential candidates are generally in favor of relaxing the law. In November 2015, Senator Bernie Sanders introduced a bill that would repeal all federal penalties for possessing and growing the plant, allowing states to establish their own marijuana laws. Hillary Clinton would not go that far but would drop cannabis from a Schedule I drug (a deadly dangerous drug with no medical use and high potential for abuse) to Schedule II (a deadly dangerous drug with medical use and high potential for abuse). Republican candidate Donald Trump says we are losing badly in the war on drugs, and that to win that war all drugs need to be legalized.

But it is Green Party presidential candidate Dr. Jill Stein who has been called “weed’s biggest fan.” Speaking from the perspective of a physician and public health advocate, Stein notes that hundreds of thousands of patients suffering from chronic pain and cancers are benefiting from the availability of medical marijuana under state laws. State economies are benefiting as well. She cites Colorado, where retail marijuana stores first opened in January 2014. Since then, Colorado’s crime rates and traffic fatalities have dropped; and tax revenue, economic output from retail marijuana sales, and jobs have increased.

Among other arguments for changing federal law is that the marijuana business currently lacks access to banking facilities. Most banks, fearful of FDIC sanctions, won’t work with the $6.7 billion marijuana industry, leaving 70% of cannabis companies without bank accounts. That means billions of dollars are sitting around in cash, encouraging tax evasion and inviting theft, to which an estimated 10% of profits are lost. But that problem too could be remedied soon. On June 16, the Senate Appropriations Committee approved an amendment to prevent the Treasury Department from punishing banks that open accounts for state-legal marijuana businesses.

Boosting trade in the new marijuana market is not a good reason for decriminalizing it, of course, if it actually poses a grave danger to health. But there have been no recorded deaths from cannabis overdose in the US. Not that the herb can’t have problematic effects, but the hazards pale compared to alcohol (30,000 deaths annually) and to patented pharmaceuticals, which are now the leading cause of death from drug overdose. Prescription drugs taken as directed are estimated to kill 100,000 Americans per year.

Behind the War on Weed: Taking Down the World’s Largest Agricultural Crop

The greatest threat to health posed by marijuana seems to come from its criminalization. Today over 50 percent of inmates in federal prison are there for drug offenses, and marijuana tops the list. Cannabis cannot legally be grown in the US even as hemp, a form with very low psychoactivity. Why not? The answer seems to have more to do with economic competition and racism than with health.

Cannabis is actually one of the oldest domesticated crops, having been grown for industrial and medicinal purposes for millennia. Until 1883, hemp was also one of the largest agricultural crops (some say the largest). It was the material from which most fabric, soap, fuel, paper and fiber were made. Before 1937, it was also a component of at least 2,000 medicines.

In early America, it was considered a farmer’s patriotic duty to grow hemp. Cannabis was legal tender in most of the Americas from 1631 until the early 1800s. Americans could even pay their taxes with it. Benjamin Franklin’s paper mill used cannabis. Hemp crops produce nearly four times as much raw fiber as equivalent tree plantations; and hemp paper is finer, stronger and lasts longer than wood-based paper. Hemp was also an essential resource for any country with a shipping industry, since it was the material from which sails and rope were made.

Today hemp is legally grown for industrial use in hundreds of countries outside the US. A 1938 article in Popular Mechanics claimed it was a billion-dollar crop (the equivalent of about $16 billion today), useful in 25,000 products ranging from dynamite to cellophane. New uses continue to be found. Claims include eliminating smog from fuels, creating a cleaner energy source that can replace nuclear power, removing radioactive water from the soil, eliminating deforestation, and providing a very nutritious food source for humans and animals.

Its demonization accompanied the demonization of Mexican immigrants, who were then flooding over the border and were widely perceived to be a threat. Pot smoking was part of their indigenous culture. Harry Anslinger, called “the father of the war on weed,” was the first commissioner of the Federal Bureau of Narcotics, a predecessor to the Drug Enforcement Administration. He fully embraced racism as a tool for demonizing marijuana. He made such comments as “marijuana causes white women to seek sexual relations with Negroes, entertainers and any others,” and “Reefer makes darkies think they’re as good as white men.” In 1937, sensational racist claims like these caused recreational marijuana to be banned; and industrial hemp was banned with it.

Classification as a Schedule I controlled substance came in the 1970s, with President Richard Nixon’s War on Drugs. The Shafer Commission, tasked with giving a final report, recommended against the classification; but Nixon ignored the commission.

According to an April 2016 article in Harper’s Magazine, the War on Drugs had political motives. Top Nixon aide John Ehrlichman is quoted as saying in a 1994 interview:

The Nixon campaign in 1968, and the Nixon White House after that, had two enemies: the antiwar left and black people. . . . We knew we couldn’t make it illegal to be either against the war or black, but by getting the public to associate the hippies with marijuana and blacks with heroin, and then criminalizing both heavily, we could disrupt those communities. We could arrest their leaders, raid their homes, break up their meetings, and vilify them night after night on the evening news. Did we know we were lying about the drugs? Of course we did.

Competitor or Attractive New Market for the Pharmaceutical Industry?

The documented medical use of cannabis goes back two thousand years, but the Schedule I ban has seriously hampered medical research. Despite that obstacle, cannabis has now been shown to have significant therapeutic value for a wide range of medical conditions, including cancer, Alzheimer’s disease, multiple sclerosis, epilepsy, glaucoma, lung disease, anxiety, muscle spasms, hepatitis C, inflammatory bowel disease, and arthritis pain.

New research has also revealed the mechanism for these wide-ranging effects. It seems the active pharmacological components of the plant mimic chemicals produced naturally by the body called endocannabinoids. These chemicals are responsible for keeping critical biological functions in balance, including sleep, appetite, the immune system, and pain. When stress throws those functions off, the endocannabinoids move in to restore balance.

Inflammation is a common trigger of the disease process in a broad range of degenerative ailments. Stress triggers inflammation, and cannabis relieves both inflammation and stress. THC, the primary psychoactive component of the plant, has been found to have twenty times the anti-inflammatory power of aspirin and twice that of hydrocortisone.

CBD, the most-studied non-psychoactive component, also comes with an impressive list of therapeutic uses, including against cancer and as a super-antibiotic. CBD has been shown to kill “superbugs” that are resistant to currently available drugs. This is a major medical breakthrough, since for some serious diseases antibiotics have reached the end of their usefulness.

Behind the Push for Legalization

The pharmaceutical industry has both much to gain and much to lose from legalization of the cannabis plant in its various natural forms. Patented pharmaceuticals have succeeded in monopolizing the drug market globally. What that industry does not want is to be competing with a natural plant that anyone can grow in his backyard, which actually works better than very expensive pharmaceuticals without side effects.

Letitia Pepper, who suffers from multiple sclerosis, is a case in point. A vocal advocate for the decriminalization of marijuana for personal use, she says she has saved her insurance company $600,000 in the last nine years, using medical marijuana in place of a wide variety of prescription drugs to treat her otherwise crippling disease. That is $600,000 the pharmaceutical industry has not made, on just one patient. There are 400,000 MS sufferers in the US, and 20 million people who have been diagnosed with cancer sometime in their lives. Cancer chemotherapy is the biggest of big business, which would be directly threatened by a cheap natural plant-based alternative.

The threat to big industry profits could explain why cannabis has been kept off the market for so long. More suspicious to Pepper and other observers is the sudden push to legalize it. They question whether Big Pharma would allow the competition, unless it had an ace up its sleeve. Although the movement for marijuana legalization is a decades-old grassroots effort, the big money behind the recent push has come from a few very wealthy individuals with links to Monsanto, the world’s largest seed company and producer of genetically modified seeds. In May of this year, Bayer AG, the giant German chemical and pharmaceutical company, made a bid to buy Monsanto. Both companies are said to be working on a cannabis-based extract.

[W]ith the cannabis industry predicted to generate over $13 billion by 2020, becoming one of the largest agricultural markets in the nation, there should be little doubt that companies like Monsanto are simply waiting for Uncle Sam to remove the herb from its current Schedule I classification before getting into the business.

. . . [O]ther major American commodities, like corn and soybeans, are on average between 88 and 91 percent genetically modified. Therefore, once the cannabis industry goes national, and that is most certainly primed to happen, there will be no stopping the inevitability of cannabis becoming a prostituted product of mad science and shady corporate monopoly tactics.

With the health benefits of cannabis now well established, the battlefield has shifted from its decriminalization to who can grow it, sell it, and prescribe it. Under existing California law, patients like Pepper are able to grow and use the plant essentially for free. New bills purporting to legalize marijuana for recreational use impose regulations that opponents say would squeeze home growers and small farmers out of the market, would heighten criminal sanctions for violations, and could wind up replacing the natural cannabis plant with patented, genetically modified (GMO) plants that must be purchased year after year. These new bills and the Monsanto/Bayer connection will be the subject of a follow-up article. Stay tuned.