Why Is the Killer of British MP Jo Cox Not Being Called a “Terrorist”?

17 Jun 2016 – British Labour MP Jo Cox was brutally murdered yesterday. Although the motive is not yet proven, there is mounting evidence that the detained suspect, 52-year-old white male Thomas Mair, was motivated by political ideology. Cox was an outspoken advocate for refugees. At least two witnesses say Mair, as he carried out the attack, yelled “Britain First,” the name of a virulently right-wing anti-immigrant party. He has years of affiliation with neo-Nazi groups: what Southern Poverty Law Center describes as “a long history with white nationalism.” The U.K. is in the midst of a bitter and virulent debate about whether to exit the EU — Cox opposed that — and much of the pro-Brexit case centers on fear-mongering over immigrants.

The #brexit referendum has poisoned the country https://t.co/fc2EpkGLzx

@LBC @mrjamesob Where does the hate and fear come from? pic.twitter.com/RB2FcvEJQp

Despite all of this, it’s virtually impossible to find any media outlet calling the attacker a “terrorist” or even suggesting that it might be “terrorism.” To the contrary, the suspected killer — overnight — has been alternatively described as a gentle soul or a mentally ill “loner”:

Both rags that did most to fuel an atmosphere of hate want you to know he was a ‘loner’ and no one else is to blame. pic.twitter.com/UawOIduKdT

The singularly sensitive way that the media treats violent white men is beyond cliché at this point. pic.twitter.com/fixp8lO5eo

This stands in stark contrast to a very similar incident that took place in the U.K. in 2010, when a British MP, Stephen Timms, was brutally stabbed and almost killed by a woman angry over his vote in support of the Iraq War. In that case, British media outlets almost uniformly called the attack “terrorism”; The Guardian, for instance, described it as “the first terrorist attack to injure someone on the U.K. mainland since 7 July 2005.” The headline of the British tabloid Mirror called the attacker a “woman terrorist.” And just yesterday, another tabloid, The Sun, reported on Timms’s comments about Cox and, in its headline, referred to him as “Terror Stab Survivor.” 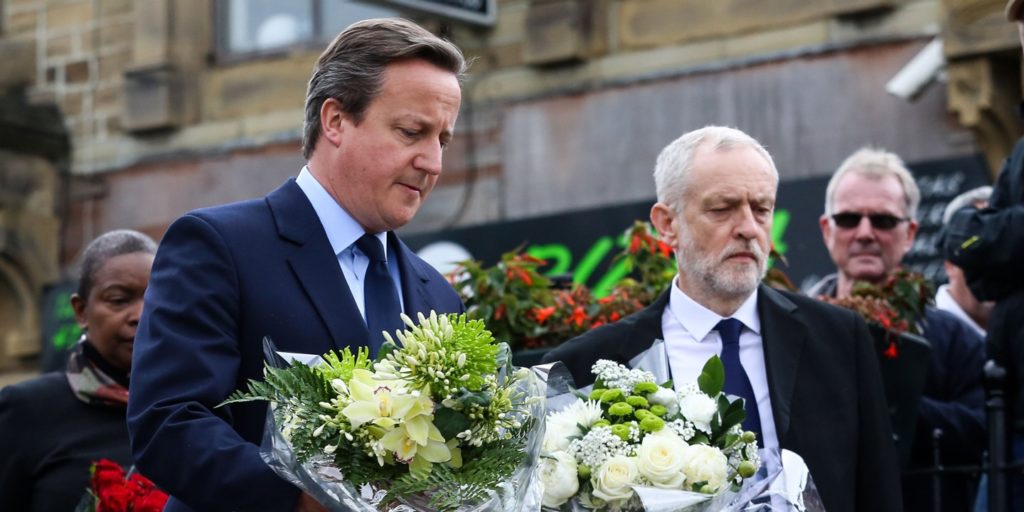 The difference is obvious: Timms’s attacker was a Muslim of Bangladeshi descent, while Cox’s alleged killer … is not. As I’ve written repeatedly, the word “terrorism” has no real concrete meaning and certainly no consistent application. In the West, functionally speaking, it’s now a propaganda term with little meaning other than “a Muslim who engages in violence against Westerners or their allies.” It’s even used for Muslims who attack soldiers of an army occupying their country.

It’s certainly true that there are some suggestions that Mair — Cox’s alleged killer — had struggles with mental illness. But exactly the same was true of Omar Mateen, who slaughtered 49 people in an Orlando LGBT club last week, and he was instantly decreed to be a “terrorist” by essentially every media outlet despite those mental health issues and his obvious struggles with his own sexual orientation.

Again, the difference is painfully obvious. As Reza Aslan put it today about Mair: “He suffered from mental illness is now terror shorthand for ‘he wasn’t Muslim’ … even if he was a fucking Nazi!” At this point, it is not hyperbole to note that the real definition of these terms is best captured by this screen shot from Family Guy:

Those who instantly and reflexively call Muslims “terrorists” struggled with how to process this latest attack. As The Daily Mail’s Dan Hodges noted, a Breitbart writer indignantly complained just four days ago that the media were refusing to assign collective guilt to Muslims for Mateen’s attack and instead were blaming mental illness  — “The media are trying to spin that this was a ‘lone wolf’ attack by an unbalanced individual while ignoring the Islamic beliefs of the attacker” — while another Breitbart writer yesterday said exactly the opposite about Cox’s killer: “Are we seriously being expected to believe that this act of violence by a deranged loner represents a statement on the political climate of Britain of which we should all take note?” As The Guardian’s Hadley Freeman put it:

It really is something seeing the same people so quick to blame Islam for other killings cry now “We don’t know the motive! Mental illness!”

Meanwhile, there was this stunningly illuminating exchange on the Facebook page of Britain First:

Did a lightbulb just go off on the Britain First Facebook page? pic.twitter.com/a9nwWrtuxN

To be very clear: I’m glad when the media withhold judgment about a killer’s motives or goals before there is sufficient evidence to know that with reasonable certainty. I have no particular objection to their refraining from applying the “terrorist” label to Cox’s killer before more evidence is available. And, as I said, the term “terrorist” at this point has so little cogent meaning that debates about how to apply it seem quaint and completely academic. The scholars Remi Brulin and Lisa Stampnitzky have spent years documenting how the term, from the start, was little more than a propaganda tool designed to legitimize one side’s violence while delegitimizing its enemies’ violence.

The issue is that this journalistic restraint is extremely selective. Does anyone have any doubt at all that if Cox’s suspected killer had been Muslim, yelling “Allah Akbar” instead of “Britain First,” then every media outlet on the planet would be describing him forever as a “terrorist”? The fact that they are not doing so here sheds great light into what this word really is.