Turkey and Israel have ended a six-year row between the two countries despite years of Ankara’s demand that Israel lifts the Gaza blockade. 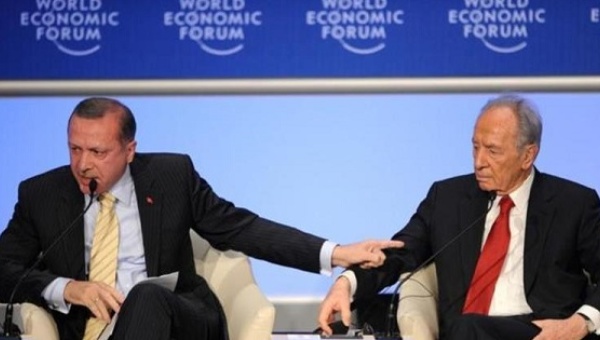 Then Turkish Prime Minister Recep Tayyip Erdogan stormed out of an impassioned debate with Israeli President Shimon Peres about the Gaza War in 2009. | Photo: AFP

27 Jun 2016 – As Israel and Turkey announced a deal Monday to normalize ties, ending a six-year rift following the deadly Israeli raid on a Turkish flotilla delivering aid to Gaza in 2010, it soon became evident that the Turkish government has compromised on its longstanding condition of lifting the blockade in return for normalization.

“This is a supreme security interest of ours. I was not willing to compromise on it. This interest is essential to prevent a force-buildup by Hamas and it remains,” Netanyahu said.

President Recep Tayyip Erdogan has not yet commented on the deal with Israel. However, the recent deal is at odds with his longstanding promise and rhetoric since 2010 that Ankara would refuse any deal with Tel Aviv unless the blockade is lifted.

Just in April a spokesman for Turkish President Erdogan said that any formal reconciliation between Turkey and Israel is impossible without the lifting of the siege on Gaza. The rift between the two countries was kicked off when Erdogan was the country’s prime minister. He became president through public vote in 2014.

For its part, Turkey has admitted the blockade will not be lifted although officials claim it will be eased. Under the normalization agreement Ankara will be able to supply humanitarian aid to the Palestinians, build a hospital, as well as provide electricity and clean water to the strip.

Unemployment within Gaza’s population of 1.6 million stands at 34 percent, with 44 percent suffering from food insecurity and 80 percent dependent on donor aid, according to the UN’s humanitarian agency.

Most of the pópulation lacks electricity and water as the Israeli government has full control over these services. Israel launched at least three major attacks against the Gaza strip, which has been ruled by Hamas since 2006, with the recent one taking place in July 2014 and lasting 50 days while killing at least 1,500 civilians including more than 450 children.

Louis Fishman, an assistant professor at Brooklyn College who writes on Turkish and Israeli-Palestinian affairs, said that while Turkey has clearly scored some points for Gaza, the deal means it now recognizes the Israeli blockade.

“Turkey’s acceptance of Israeli monitoring of these goods and services is an achievement for Israel, since it essentially is de facto recognition of the Gaza blockade itself,” Fishman wrote in a column for Israeli newspaper Haaretz on Monday.

He added that Israel has also “received assurances that IDF [Israeli Defense Forces] soldiers who participated in the Flotilla Raid will be free from criminal charges in Turkish courts.”

The main driver behind the Turkish-Israeli normalization deal seems to be deeply economical. The mending in relations between the once-firm allies after years of negotiations raises the prospect of eventual cooperation to exploit natural gas reserves worth hundreds of billions of dollars under the eastern Mediterranean, officials have said.

US Slams Israel over Extrajudicial Killing