Imaginary Lines – Balance Sheet of the U.S. Invasion of Iraq:

5 Jul 2016 – “I’ll be with you, come what may.” These were the words that former British Prime Minister Tony Blair uttered in April 2002 to his partner in crime, former United States President George W. Bush, before they carried out the Iraq invasion a year later and unleashed a series of irreversible tragedies that Iraqis and neighboring Syrians are suffering from to this day.

In March, Iraqis marked the 13th anniversary of the U.S. invasion of Iraq, and today it is clear the arrogant intervention by the U.S. and the U.K. and their allies transformed Iraq and Syria into two failed states.

“There is no Syria or Iraq,” said Kurdistan Regional Government Intelligence Director Lahur Talabani in an interview with Voice of America last December. “With the arrival of ISIS in the region, they removed the borders that were put in place,” he added, using the popular acronym for the Islamic State group.

The two states, the artificial product of French and British colonialism a century ago, no longer function as the leaders, who managed to keep ethnically and religiously diverse nations together through an iron fist, have been either killed, as in the case of Iraq, or compromised, as is the case in Syria. 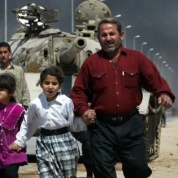 Washington, London and their allies argued then that the Iraq invasion was for the greater good of bringing democracy to the Iraqi people, an excuse used in the case of Syria today.

In reality, however, the Iraq war was the product of personal vengeance, economic interest and a strategic plan for gaining influence and undermining other powers in the region.

The spearhead of the plan was then President George W. Bush, who wanted to finish Saddam Hussein off and complete the job his father started in the Gulf War of the early 1990s, which resulted in some of the harshest sanctions in history against Iraq and its people.

Meanwhile, Bush’s financially invested partners, in particular Dick Cheney, had their eyes fixed on the possibility of lucrative, post-war, private contracts and the country’s deep oil wells which Saddam had nationalized, positioning Iraq as a key player in the region and a challenge to the West’s key ally Saudi Arabia.

Opening up Iraq to the U.S. military would also help Washington expand its dominance in the Persian Gulf, gaining a strategic advantage over its decades-long enemy Iran and giving Saudi Arabia the upper hand in the region.

As is well-documented, to oust their ally-turned-foe, Bush and Blair falsely accused Saddam’s government of owning Weapons of Mass Destruction and helping al-Qaida carry out the September 11, 2001 terror attacks in the U.S.

The invasion brought down the Iraqi government relatively quickly but what came next was as far from democracy as could be.

Thousands of people were killed as the Iraqi political elite in government and the army was dismantled, forming small militias and alliances that resisted what was effectively a colonial occupation.

Successive U.S.-backed Iraqi governments have since been fueling sectarian tensions in the country by systematically sidelining and alienating Sunnis, who make up 40 percent of the population and once ruled the country.

Meanwhile, the Kurdish minority in the country formed its own U.S.-backed administration in the north after supporting the U.S. invasion and lobbying for it.

OPINION: On Racism, Patriarchy and Corruption in Iraqi Kurdistan

The aftermath of the Iraq invasion has been constant bad news since 2003.

Most recent estimates say more than 200,000 Iraqis have been killed since 2003 as a direct result of the U.S. Iraq invasion, although some put the figure as high as a million people. More than 70 percent of those were civilians. Meanwhile, more than three million people remain either internally displaced or have fled the country.

The war also inflicted huge damage on the educational system in Iraq. Before the U.S.-led invasion, Iraq’s education system was one of the most distinguished in the Middle East and North Africa.

Under Saddam Hussein’s rule, Iraq’s national literacy campaign was widely recognized as an international success as literacy rates increased from 52 percent in 1977 to 80 percent in 1987. Also by 1991, women comprised 30 percent of university faculties.

However, all that changed in the years following the invasion. A United Nations report in 2013 said Iraq’s secondary education sector now has the lowest enrollment rates in the region.

Less than 9 percent of Iraqi adults have completed secondary education, while 22 percent have never attended school at all. The report further warned that over a quarter of the Iraqi female population was illiterate.

Meanwhile, the conflict left the Iraqi security forces completely under-trained and compromised. In 2014, amid a major deterioration of the security situation in the country, the Islamic State group came to existence, rising from the ashes of al-Qaida members who were defeated a few years before by a major joint U.S.-Iraqi operation.

In a few days the Islamic State group took over Mosul, the second largest city in  Iraq and acquired hundreds of millions of dollars from the city’s central bank. Iraqi soldiers and police reportedly took off their uniforms and fled the city without putting up a fight.

Since then the group expanded and controls one-third of Iraq and roughly the same amount of land in Syria. The group also controls several oil refineries in both countries, which constitutes a significant source of income for the group through oil smuggling activities across the borders with Iran and Turkey.

Directly or not, the Iraq invasion and its aftermath fueled some of the most sectarian sentiments in the region, allowing extremist groups like al-Qaida and the Islamic State groups to attract more members.

Sunni anger and frustration over the U.S.-backed Shiite governments in Iraq was the perfect recruitment tool for extremist Sunni groups.

Therefore, the current situation in Syria could not be seen without a context that includes the U.S. Iraq invasion.

In the five years since the start of the Syrian conflict, the country is a failed state in a similar fashion to its next door neigbor. More than 250,000 people have been killed while millions have been internally displaced or fled the country all together.

In fact, 80 percent of the one million refugees who arrived in Europe in 2015 were from Syria, Iraq and Afghanistan.

Furthermore, Syria’s education and other public sectors have been dramatically damaged as a result of the conflict and the country faces a major humanitarian crisis as millions have no access to food and medical assistance.

In September, the U.N. said more than 2.8 million Syrian children are prevented from attending school across Syria and in neighboring countries where they sought refuge.

On the ground, Syria has now been unofficially divided into three different regions controlled by the Syrian government, Saudi and Turkish-allied rebels and the Islamic State group.

The Syrian Kurdish leadership announced autonomy last week in three northern regions where Kurds have had de facto control for more than a year, in what could lay the groundwork for a federal system.

Amid fragile U.N. peace talks, U.S. officials have been publicly flirting in recent weeks with the idea of partitioning Syria according to sectarian divides.

“The Middle East we have known is over. I doubt that it will come back,” French intelligence director Bernard Bajolet told a CIA-sponsored panel discussion in October.

Decades of U.S. and Western interventions in the Middle East have exposed time and time again a dirty agenda based on narrow self-interest, even when the result is terrorism, humanitarian crisis and the undermining of any hope for democracy.