We Love to Talk of Terror – But After the Munich Shooting, This Hypocritical Catch-All Term Has Finally Caught Us Out

How come a Muslim can be a terrorist in Europe but a mere ‘attacker’ in south-west Asia?

24 Jul 2016 – The frightful and bloody hours of Friday night and Saturday morning in Munich and Kabul – despite the 3,000 miles that separate the two cities – provided a highly instructive lesson in the semantics of horror and hypocrisy. I despair of that generic old hate-word, “terror”. It long ago became the punctuation mark and signature tune of every facile politician, policeman, journalist and think tank crank in the world.

But from time to time, we trip up on this killer cliché, just as we did at the weekend. Here’s how it went. When first we heard that three armed men had gone on a “shooting spree” in Munich, the German cops and the lads and lassies of the BBC, CNN and Fox News fingered the “terror” lever. The Munich constabulary, we were informed, feared this was a “terrorist act”.  The local police, the BBC told us, were engaged in an “anti-terror manhunt”.

And we knew what that meant: the three men were believed to be Muslims and therefore “terrorists”, and thus suspected of being members of (or at least inspired by) Isis. 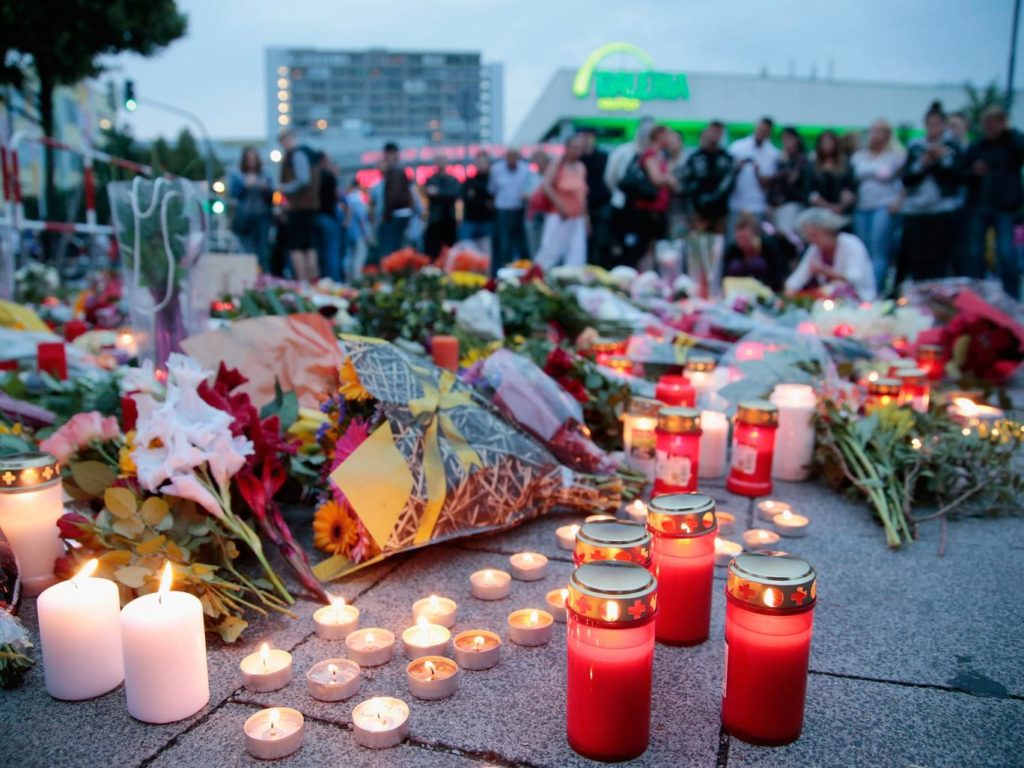 A memorial to those shot by the Munich gunman, who was said to be obsessed with mass shootings. Getty Images

Then it turned out that the three men were in fact only one man – a man who was obsessed with mass killing. He was born in Germany (albeit partly Iranian in origin). And all of a sudden, in every British media and on CNN, the “anti-terror manhunt” became a hunt for a lone “shooter”.

One UK newspaper used the word “shooter” 14 times in a few paragraphs.  Somehow, “shooter” doesn’t sound as dangerous as “terrorist”, though the effect of his actions was most assuredly the same. “Shooter” is a code word. It meant: this particular mass killer is not a Muslim.

Now to Kabul, where Isis – yes, the real horrific Sunni Muslim Isis of fearful legend – sent suicide bombers into thousands of Shia Muslims who were protesting on Saturday morning at what appears to have been a pretty routine bit of official discrimination.

The Afghan government had declined to route a new power line through the minority Hazara (Shia) district of the country – a smaller electric cable connection had failed to satisfy the crowds – and had warned the Shia men and women to cancel their protest. The crowds, many of them middle-class young men and women from the capital, ignored this ominous warning and turned up near the presidential palace to pitch tents upon which they had written in Dari “justice and light” and “death to discrimination”.

But death came to them instead, in the form of two Isis men – one of them apparently pushing an ice-cream cart – whose explosives literally blew apart 80 of the Shia Muslims and wounded at another 260.

In a city in which elements of the Afghan government are sometimes called the Taliban government, and in which an Afghan version of the Sunni Muslim Islamic State is popularly supposed to reside like a bacillus within those same factions, it wasn’t long before the activists who organised the demonstration began to suspect that the authorities themselves were behind the massacre. Of course, we in the West did not hear this version of events. Reports from Kabul concentrated instead on those who denied or claimed the atrocity. The horrid Islamist Taliban denied it. The horrid Islamist Isis said they did it. And thus all reports centred on the Isis claim of responsibility.

Now this is very odd. How come a Muslim can be a terrorist in Europe but a mere “attacker” in south-west Asia? Because in Kabul the killers were not attacking Westerners? Or because they were attacking their fellow Muslims, albeit of the Shia Muslim variety?

I suspect both answers are correct. I can find no other reason for this weird semantic game. For just as the terrorist identity faded away in Munich the moment Ali Sonboly turned out to have more interest in the Norwegian mass murderer Anders Breivik than the Caliph Abu Bakr al-Baghdadi of Mosul, so the real Isis murderers in Kabul completely avoided the stigma of being called terrorists in any shape or form.

This nonsensical nomenclature is going to be further warped – be sure of this – as more and more of the European victims of the attacks in EU nations turn out to be Muslims themselves. The large number of Muslims killed by Isis in Nice was noticed, but scarcely headlined. The four young Turks shot down by Ali Sonboly were subsumed into the story as an almost routine part of what is now, alas, the routine of mass killing in Europe as well as in the Middle East and Afghanistan.

The identity of Muslims in Europe is therefore fudged if they are victims but of vital political importance if they are killers. But in Kabul, where both victims and murderers were Muslim, their mutual crisis of religious identity is of no interest in the West; the bloodbath is described in anaemic terms. The two attackers “attacked” and the “attacked” were left with 80 dead – more like a football match than a war of terror.

Scissor out this paragraph and keep it beside you when the killers next let loose – and you’ll be able to work out who the bad guys are before the cops tell you.