29 Jul 2016 – The novel inclusion of a gender perspective in the peace talks that led to a historic ceasefire between the Colombian government and left-wing guerrillas is a landmark and an inspiration for efforts to solve other armed conflicts in the world, according to the director of U.N.-Women in Colombia, Belén Sanz.

In statements to IPS, Sanz described as “innovative and pioneering” the incorporation of a gender subcommittee in the negotiations between the administration of President Juan Manuel Santos and the Revolutionary Armed Forces of Colombia (FARC), which began in November 2012 in the Cuban capital and ended in late June with a definitive ceasefire. 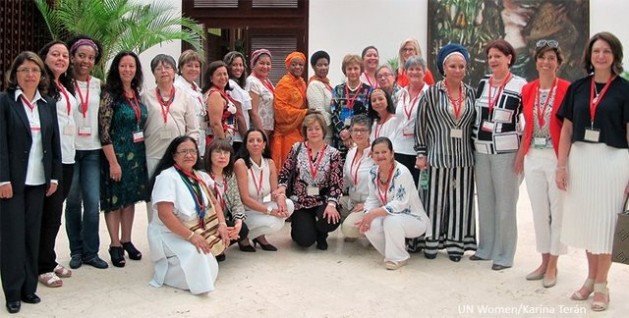 Representatives of the gender subcommittee to Colombia’s peace talks alongside the U.N. Secretary General’s Special Representative on Sexual Violence in Conflict, Zainab Hawa Bangura (centre-left) and U.N.-Women Executive Director Phumzile Mlambo-Ngcuka, during the Jul. 23 presentation of the preliminary results of the novel initiative, in Havana, Cuba. Credit: Karina Terán/U.N.-Women

She said the large proportion of women who spoke with the negotiating teams, in regional and national forums, and during visits by victims and gender experts to Havana showed the growing openness on both sides to the inclusion of gender proposals in the final accord and the mechanisms for its implementation.

The results of the work by the subcommittee, made up of representatives of both sides, were presented in Havana during a special ceremony on Jul. 23, exactly one month after the ceasefire was signed, putting an end to over a half century of armed conflict.

Taking part in the ceremony were U.N.-Women Executive Director Phumzile Mlambo-Ngcuka; the U.N. Secretary General’s Special Representative on Sexual Violence in Conflict, Zainab Hawa Bangura; and Sanz, whose office has worked closely with the subcommittee.

The results of the subcommittee´s work, presented on that occasion, include the incorporation of a gender perspective and the human rights of women in each section of the agreement, starting with guarantees for land access and tenure for women in rural areas.

Other points agreed on were women’s participation in decision-making to help ensure the implementation of a lasting, stable peace; prevention and protection measures for a life free of violence; guarantees of access to truth and justice and measures against impunity; and recognition of the specific and different ways the conflict affected women, often in a disproportionate manner.

“These are some examples that can be illustrative and inspiring for other peace processes around the world,” Sanz said from Bogotá, after her return to the Colombian capital. 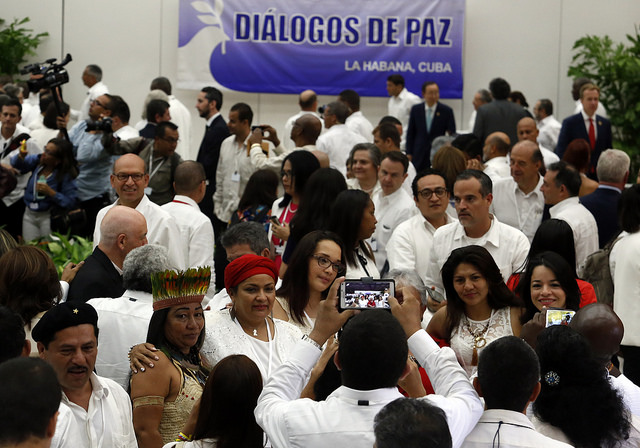 Victoria Sandino, a FARC commander, who headed the guerrillas’ representatives to the gender subcommittee in the peace talks with the Colombian government (second-left, wearing red headscarf), poses with members of civil society during the signing of the definitive ceasefire on Jun. 23 in Havana, Cuba. Credit: Jorge Luis Baños/IPS

In her view, “these strides forward represent milestones in the promotion of women’s rights and the transformation of gender inequality during the construction of and transition to peace, which could be exported to other places in the world and adapted to their particular conditions and contexts.”

The introduction of a gender focus also includes the search for ensuring conditions for people of different sexual orientations to have equal access to the benefits of living in a country free of armed conflict.

“For women and people with different sexual identities to be able to enjoy a country at peace is not only a basic human rights question: without their participation in the construction of peace and, as a result, without their enjoying the benefits of peace, peace and stability themselves are threatened,” said Sanz.

She cited a study commissioned in 2015 by U.N. Secretary-General Ban Ki-moon, 15 years after the approval of Security Council Resolution 1325, designed to promote the participation of women in peace processes.

The report showed that women’s participation increases by 20 percent the probability that a peace agreement will last at least 20 years, and by 35 percent the chance that it will last 15 years.

“So if women don’t participate in peace-building processes, not only as ‘beneficiaries’ but as drivers of change and political actors, it’s hard to talk about a stable, lasting peace,” said Sanz. 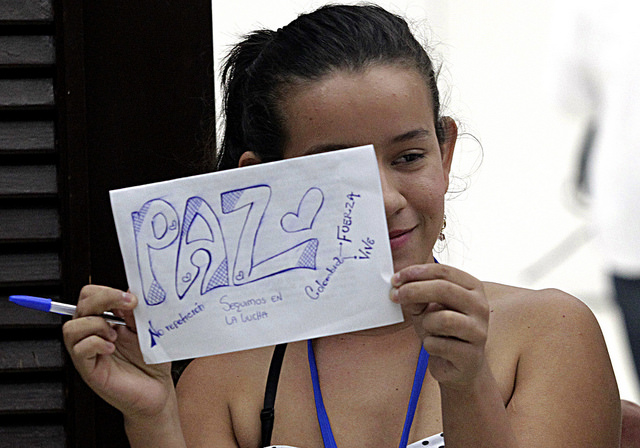 Erika Paola Jaimes, a survivor of Colombia’s armed conflict, holds a sign about peace during a trip to Havana to participate in the peace talks between the government and the FARC rebels, which led to a ceasefire signed Jun. 23 in the Cuban capital. Credit: Jorge Luis Baños/IPS

The U.N. study also shows the risks faced by women in the post-peace deal stages.

According to the report, women in areas affected by the conflict have fewer economic opportunities and suffer the emotional and physical scars of the conflict, without support or recognition – besides often facing routine violence in their homes and communities and shouldering the burden of unpaid care for children and the elderly and household tasks.

In a broader sense, “the structures of inequality remain in place and measures are needed to dismantle them, as well as a commitment by society as a whole,” said Sanz, who described a transition process like the one that Colombia is facing as “a key opportunity” to transform women’s status in society.

She said the continued work of the gender subcommittee is “crucial”, as well as that of women’s organisations, with the support of international aid, in order to incorporate provisions in the agreements to enable these situations of inequality to gradually be transformed, with a view to the period following the signing and implementation of the accords.

The inclusion of gender provisions in peace agreements “opens a window of opportunity for the transformation of existing structures of inequality and can also be an opportunity for other peace processes, during the signing of the agreements and the stage of implementation,” said the head of U.N.-Women.

According to estimates, women account for over 40 percent of the members of the FARC, whose exact numbers are not publicly known.

Overall, women represent slightly over half of the general population of 48 million. However, Colombia is one of the countries in Latin America with the lowest levels of female representation in politics.

In 2015, women represented only 14 percent of town councilors, 17 percent of the members of the lower house of Congress, 10 percent of mayors and nine percent of governors. These figures are still far below the parity that would do justice to the proportion of women in society, states a U.N.-Women report.