8 Aug 2016 – Despite Western opposition, the 134-member Group of 77 is continuing to pursue a longstanding proposal for an inter-governmental UN-affiliated tax body aimed at combating corporate tax dodging and curbing illicit financial flows, including money laundering and offshore banking. 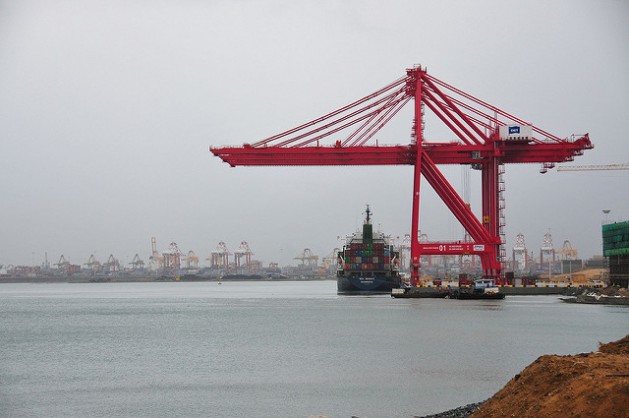 Developing countries are often missing out on collecting taxes from their exports. Credit: Amantha Perera/IPS.

The proposal has already been shot down twice by Western nations, first, at the Financing for Development (FfD) conference in Addis Ababa in July last year, and more recently, at the 14th session of the UN Conference on Trade and Development (UNCTAD 14) in Nairobi last month.

But a G77 source told IPS the proposal is very much alive – and still on the negotiating table.

The proposal by the G77, the largest single coalition of developing countries, calls for the establishment of a standing intergovernmental group of experts to address tax issues, including international tax issues, and to assist countries better mobilize and employ fiscal revenues.

In Africa alone, the estimated resources leaving the continent, in the form of illicit financial transfers, was nearly 530 billion dollars between 2002 and 2012, according to UNCTAD.

Bhumika Muchhala, Senior Policy Researcher, Finance and Development Programme, at the Malaysia-based Third World Network (TWN), told IPS the key reason why the global tax system has failed is that more than half of the world’s countries are currently excluded from the decision making processes on global tax standards.

“We in global civil society hope that the G77 and China, both in New York and Geneva, will continue to persistently raise the need for an intergovernmental tax body, under the auspices of the United Nations, in every relevant conference, negotiation and discussion within the UN, regional commissions, Bretton Woods Institutions and other international institutions, particularly the Organization for Economic Cooperation and Development (OECD) which has a monopoly role in global tax governance by developed country donors”, she said.

“We know by examples of history that truly meaningful reforms and establishment of new bodies that break old rigid structures of imperialism, exclusion and unequal power requires a long arc of time and needs to be pushed through every open crack in the status quo by repeated and persistent demands by a group that takes the leadership to exert collective pressure,” she added.

As to whether the G77 and China will bring up the proposal again, Muchhala said, the hope is they will continue to persistently bring it up in every possible space, conference and discussion.

Dr Manuel Montes, Senior Advisor on Finance and Development at the Geneva-based South Centre, told IPS the proposal was meant to create an intergovernmental process, whose deliberations would have brought up in the agenda issues of interest to developing countries.

Right now, he said, agenda-setting is made in OECD, which the G20 countries commissioned to put out the 15 action items under Base Erosion and Profit Shifting work.

The G77 proposal did not survive the Nairobi outcome even though there is this text that allows UNCTAD to work on tax issues as a matter of research, including assistance to developing countries to design and implement policies and actions aimed at improving the efficiency of trade transactions as well as the management of transport operations.

Additionally, it should also continue to cooperate with member States in implementing ASYCUDA, the automated system for customs data, and work on taxation as it relates to investment policy.

The upgrading of the UN Committee of Experts on International Cooperation in Tax Matters to an intergovernmental level was the last outstanding item that prevented agreement at the FfD conference in Addis Ababa.

“The developed countries, led by the US, blocked the proposal,” Dr Montes said.

The OECD dominance in this regard could have been mitigated somewhat if the UN process in tax cooperation had been upgraded to an intergovernmental level, as proposed in the Addis Ababa conference.

The OECD secretariat “reports” to its member states, and changes in agenda have to be first accepted by its member states, even though it has been making a lot of effort increasing the participation of developing country officials and the UN– but by invitation.

The OECD would still be an important and perhaps a dominant player in such a UN process, but it would not be the sole source of the intergovernmental agenda and norm setting, he declared.

Martin Khor, Executive Director of the South Centre who participated in UNCTAD 14, told IPS the developing countries under G77 and China succeeded in defending their development interests and in obtaining a renewed mandate for UNCTAD to continue their work.

“They had to face major developed countries and their groupings that were quite insistent on narrowing the scope of UNCTAD’s future work and thus the scope of the UN.”

As a result, he said, there was unfortunately no mandate for the UN to set up an inter-governmental group on how to deal with tax issues as the developed countries prefer to use their group, the OECD to make decisions on issues like tax evasion and tax havens.

There are other examples in the areas of trade, debt and finance where the outcomes could have been much better but were instead disappointing.

Nevertheless the renewal of UNCTAD’s mandate for its next four years work was an achievement of UNCTAD 14, given the shaky state of North-South cooperation on global economic issues, said Khor.

Prerna Bomzan, Policy Advocate for LDC Watch, representing the 48 least developed countries (LDCs), told IPS: “Given its historic role in contributing to defining the LDC category, we welcome the re-statement of UNCTAD’s mandate to strengthen its focus on the trade and development needs of LDCs. This is in accordance with the Istanbul Programme of Action and other relevant outcomes on LDCs.”

However, she said, this mandate must be further strengthened, focusing on building consensus with development partners so that they deliver on their key long-standing commitments to LDCs, such as 100 per cent duty-free-quota-free market access on a lasting basis; simpler and preferential rules of origin: a meaningful service waiver and eliminating domestic cotton subsidies”.