Dreaming Again for Equality in India

The Dalits need to be mindful of what to expect and wise to organise the community, and continue their struggle. 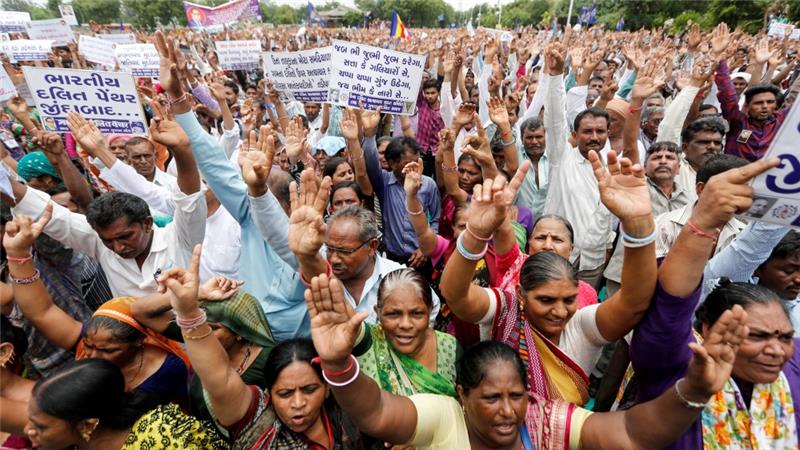 We need to nurture the desire to reduce the gap between rich and poor, writes Mahadeva [Reuters]

15 Aug 2016 – He was a firebrand and when he spoke, the warmth in his speech touched us. He was Professor Mariswamy Madaiah, who was born as an untouchable Hindu and died as a Buddhist.

An incident from an interview with Mariswamy has haunted me ever since reading it. Mariswamy was waiting for a bus to go to the next village on a street where upper caste Lingayats lived.

An elderly gentleman asked his son: “Who is that guy sitting there?”, pointing a finger at Mariswamy.

The son said, “The arrack-maker, Madayya’s son, a teacher”. As soon as the elderly gentleman heard this, filthy words came out of his mouth.

“Get up”, he shouted at Mariswamy in a condescending manner. Recalling this incident Mariswamy says in the interview: “We had accepted that this is how we lived. Only after reading Babasaheb Ambedkar’s writings did we realise that the caste system is a wound”.

The need for healing

India has fallen with “wounds” but has not realised it. “Wounds” of caste, religion and untouchability have become sore and infectious and have made India mentally ill. This illness has been depicted as culture and heritage, and society has believed it.

A person born here becomes weary, losing much of their strength and expertise in battling with this illness.

The Untouchable community who are forced outside the village have not killed anyone, nor oppressed anyone, nor looked down derogatively on anyone because of their caste. So this community should have received respect instead of humiliation. Society would have felt this if it was aware of the “wound” and illness.

People who have this awareness and can see the illness yearn for liberation. This liberation won’t be just theirs but it will make the entire society move in the direction of liberation.

Who needs healing? Cultural healing is needed for those who are infested with the disease of superiority-inferiority; social healing for people who believe that the doctrine of discrimination is tradition; financial healing for lower classes who have no stamina to rise out of their poverty.

Any movement of identity is a stream subjected to inequality and exists to join the river of equality along with other streams with similar wishes.

What have we lost because of “caste”? Let us leave wealth, status and so on aside for a moment. Just because a person was born into a particular caste, he or she has lost his sense of justice and truthfulness.

Their conscience will be blind and insensitive to the pleasures and difficulties of people who do not belong to their caste. Their sensitivity has been affected by a disease overall. It’s frightening. We have become mean and sick – of all the losses I feel this is the greatest loss.

To achieve freedom from caste is to safeguard a sense of justice and truthfulness, which is inside of us all and protects our sensitivity. We need to sow these feelings in the next generation who need to live peacefully.

A system of extreme inequality

Dalits have taken a position to annihilate caste after having been injured by the caste system. They need to be mindful of what to expect and wise to organise the community, and continue the struggle.

It is like walking on a wire. Why the necessity of organising based on identity? It is for equality, decentralisation and to eliminate discrimination.

Any movement of identity is a stream subjected to inequality and exists to join the river of equality along with other streams with similar wishes.

If the identity movements, such as adivasi, women, dalit, minorities, oppressed communities and farmers who are struggling for equality, do not realise this. We will witness disintegration instead of unity.

It has become imperative for any movement wishing for equality to move with this awareness.

Today it has become even more crucial. If you only notice the speed and the direction at which India is moving: For instance dreams of freedom fighters have become a target for mockery.

People laugh if you mention equality. Then which India do we want? In Mumbai, India’s billionaire Mukesh Ambani’s home has 27 floors, three helipads, 10 lifts, hanging gardens, dance rooms, gyms, multiple floors for parking cars and 600 staff, and all around thousands of slum huts.

Where is India going?

Where will this lead us? This wealth will not stop with indulgences of luxury. It will dance beyond its limits of buying everything and will put everything for auction.

It won’t leave anyone out – people’s representatives, legislators, members of parliament – and, not content with that, the accumulation of wealth in the hands of few, will turn democracy upside down extending its tentacles to judiciary, administration and media.

We need to find a sustainable way to rescue the land, air, water and light which has been used to generate this wealth.

Today cities are choked and unable to breathe. Villages have lost the strength to move forward. Farmers are committing suicide.

The only way to live here is to sow the seeds of an equality dream. We need to nurture the desire to reduce the gap between rich and poor. We need to address the discrimination in school education first, and through an equitable education system write the curriculum according to the constitutional equality and build tomorrow’s India.

Devanuru Mahadeva is an Indian novelist writing in Kannada language and an influential public intellectual.

This article was translated from Kannada by Sridhar Gowda.