Health Secrets of the Amish 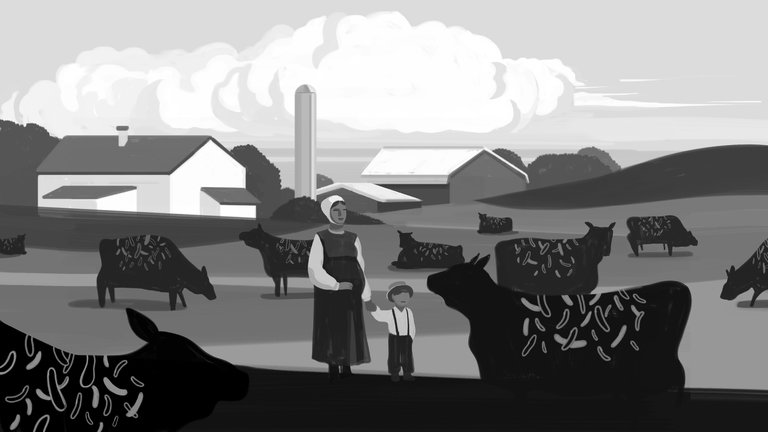 3 Aug 2016 – In recent decades, the prevalence of asthma and allergies has increased between two- and threefold in the United States. These days, one in 12 kids has asthma. More are allergic.

The uptick is often said to have started in the late 20th century. But the first hint of a population-wide affliction — the sneezing masses — came earlier, in the late 19th century, among the American and British upper classes. Hay fever so closely hewed to class lines, in fact, it was seen as a mark of civilization and refinement. Observers noted that farmers — the people who most often came in contact with pollens and animal dander — were the ones least likely to sneeze and wheeze.

This phenomenon was rediscovered in the 1990s in Switzerland. Children who grew up on small farms were between one-half and one-third less likely to have hay fever and asthma, compared with non-farming children living in the same rural areas. European scientists identified livestock, particularly dairy cows, fermented feed and raw milk consumption as protective in what they eventually called the “farm effect.” Many scientists argued that the abundant microbes of the cowshed stimulated children’s immune systems in a way that prevented allergic disease.

Then, a few years ago, researchers found an American example of the phenomenon: the Amish. Children from an Amish community in Indiana had an even lower prevalence of allergies than European farmers, making them among the least allergic subgroup ever measured in the developed world.

Now a study released on Wednesday in The New England Journal of Medicine advances the research. The authors did something new and important: They found a suitable comparison group for the Amish in another farming community, the Hutterites. The two groups share genetic ancestry. Both descend from German-speaking stock. But unlike the Amish, the Hutterites, who live in the upper Midwest, are as allergic as your average American.

Why doesn’t farming protect the Hutterites?

A likely reason is that while the Amish have small farms, with cowsheds located right next to their homes, the communal-living Hutterites house their livestock miles away. The Amish probably bring more microbes into their homes — and some may waft in directly — resulting in a microbial load nearly six times higher than that found in Hutterite houses, the scientists discovered.

In addition, primarily adult men work with the cows in Hutterite communities, while Amish children play in the cowsheds, and Amish women, including pregnant ones, presumably have frequent contact with the cowshed microbes. In Europe, women exposed to these microbes while pregnant have been found to have the least allergic kids of all. Microbial stimulation of the maternal immune system may preprogram the unborn child against allergy — an effect that’s reproducible in rodents. So while both communities farm, the Hutterites seem to lack the right exposures at the right time.

About 5 percent of the Amish children in the study have asthma, while 21 percent of the Hutterites do. And the immune systems of these two genetically similar communities look remarkably different. Hutterite children have more white blood cells involved in allergy, called eosinophils, while another cell type, called neutrophils — which specializes in repelling microbes — predominates in Amish children. Perhaps more important, Amish white blood cells have a different profile of gene expression than Hutterite, one that signals restraint rather than aggression. This ability to not overreact to pollens and danders is, scientists think, important for avoiding asthma and allergies.

The scientists also sought to reproduce these immunological profiles in animals by treating mice with microbe-laden dust from both Amish and Hutterite homes. The two dusts had drastically different effects when the mice inhaled them through their noses every few days for over a month. Amish dust prevented symptoms of asthma; Hutterite dust encouraged them.

The study has some shortcomings. It’s small — just 30 children from each community. The scientists didn’t identify the specific microbes that might be important. Nor do they know if those microbes take up residence in the gut microbiome or elsewhere in the body. Martin Blaser, director of the Human Microbiome Program at New York University, also points out that the scientists didn’t control for antibiotic use or C-section rate, both of which may, by disturbing the gut microbiota, alter asthma risk.

But the fact that they could so faithfully reproduce in mice what they saw in people using only dust suggests that they’ve identified an important component of the farm effect. And the simplicity of the mechanism — microbes that stimulate the innate immune system — is heartening. “That is precisely why we’re so excited,” Donata Vercelli, a researcher at the University of Arizona in Tucson and a senior author on the study, told me. “This seems to be a manageable situation,” she said, one that could lead to a plausible intervention, like a preventive medication based on Amish microbes.

The findings also reiterate the theme that genes aren’t destiny. Disease emerges from the dance between genes and environment. The asthma epidemic may stem, at least in part, from the decline of what Graham Rook, an immunologist at University College London, years ago called our “old friends” — the organisms our immune systems expect to be present in the environment. The newly sneezing upper classes in the 19th century may have been the first to find themselves without these old friends. Now most of the developed world has lost them. The task at hand is to figure out how to get them back. One answer may come from the Amish cowshed.

Moises Velasquez-Manoff, the author of An Epidemic of Absence: A New Way of Understanding Allergies and Autoimmune Disease, is a contributing opinion writer.

A version of this op-ed appears in print on August 4, 2016, on page A23 of the New York edition with the headline: Health Secrets of the Amish.