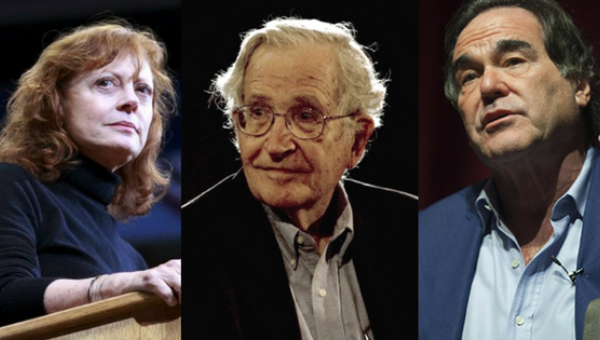 The international personalities signed a letter in support of Rousseff. | Photo: Reuters

Other than Stone and Chomsky, the other 22 people who signed the petition include U.S. actor Danny Glover, “Lord of the Rings” star Viggo Mortensen and Academy Award winner Susan Sarandon.

“We are concerned about the politically motivated impeachment of the president, which installed an interim unelected government,” the letter reads.

“The legal basis for the ongoing impeachment is widely questionable and there is convincing evidence showing that the main drivers of the impeachment campaign are trying to remove the president in order to stop corruption investigations in which they themselves are involved.”

The signatories of the petition also criticize the interim Temer government’s attack on culture, diversity and human rights.

“We regret that the interim government in Brazil has replaced a diverse ministry, headed by the first female president, by a ministry composed of white men, in a country where the majority identify themselves as black or brown.”

The signatories also state their belief that any impeachment of Rousseff will spark a negative reaction across Latin America if the process is successful.

“Since Brazil is the fifth most populous country in the world, these events are of great importance to all who care about equality and civil rights,” the text reads.

Filmmaker Ken Loach is also one of the signatories, as are the musicians Tom Morello and Brian Eno.

The letter was published in both Portuguese and English.

“We stand in solidarity with our fellow artists and all those who fight for democracy and justice in Brazil.”