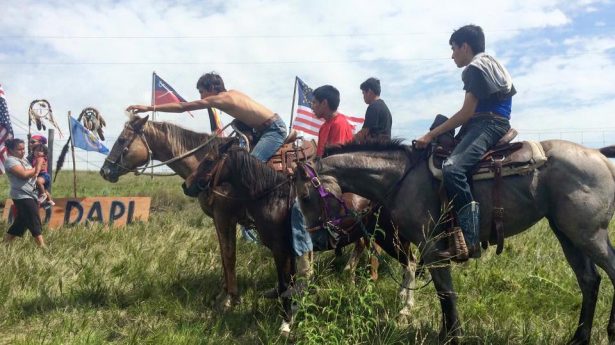 On Thursday [11 Ago 2016], nonviolent protesters outside North Dakota’s Standing Rock Sioux reservation entered their second day of confrontation with private security and local law enforcement. Armed with drums, tribal flags, and cell phones, demonstrators moved to block the construction of the Dakota Access Pipeline, a $3.7 billion dollar crude-oil conduit slated to cut just 1,000 feet from the perimeter of native land. Confrontations began on Wednesday, August 10, when construction crews and private security hired by Energy Transfer Partners, the Texas-based developers overseeing the pipeline, arrived to break ground. Arrests were made beginning Thursday, as 14 protesters were charged with disorderly conduct and trespassing, while dozens more remained defiantly on site.

Thursday’s arrests represented a sharp break after months of quiet occupation on the site. Organizers, led by Standing Rock Sioux, established Camp of the Sacred Stones in April, after learning of the impending project. Concerned that the pipeline would wreak havoc on the sacred sites and delicate wildlife in the area, a group of about 30 indigenous tribal members and allies moved to occupy the proposed construction site. “This is a prayer camp movement to save our sacred land and water and has been entirely supported by the people and the campers,” the group wrote online. LaDonna Brave Bull Allard, a tribal historian and organizer, was confident as she spoke to reporters in April. “We will stop it. We have prayer with us.”

Central to the group’s concern is the potential contamination of local water, as the path of the pipeline cuts under the Missouri River, just shy of its confluence with the Cannonball River. “Water is life” —  or “mni Wiconi” in Dakota/Lakota — has become one of their rallying cries. As the summer progressed, organizers appealed to the Environmental Protection Agency and the Army Corps of Engineers, or USACE, to conduct more thorough assessments of the project’s potential impact. They argued that the pipeline, which would pump as much as 570,000 barrels daily of fracked Bakken crude under the Missouri River, represents a major ecological threat as well as public health risk.

Rather than comply with these requests, the USACE announced on July 26 that it had approved permits requested by Energy Transfer Partners to begin work on the pipeline. A coalition of lawyers and advocates issued a statement of protest on August 5, arguing that both tribal and environmental concerns were being disregarded. The statement said, “We call for a full halt to all construction activities and repeal of all USACE permits until formal tribal consultation and environmental review are properly and adequately conducted.”

Further efforts have been spearheaded by the younger generation. Standing Rock Youth launched an online petition in the spring and gathered 166,140 signatories. To draw further attention to their cause, a group of runners from the community, along with non-native allies, mounted a 500-mile “spiritual relay,” running from Cannonball, North Dakota to the USACE district office in Omaha, Nebraska. When the USACE failed to respond, the group extended their run to Washington D.C. and New York City, traversing 2,000 miles to deliver the petition. 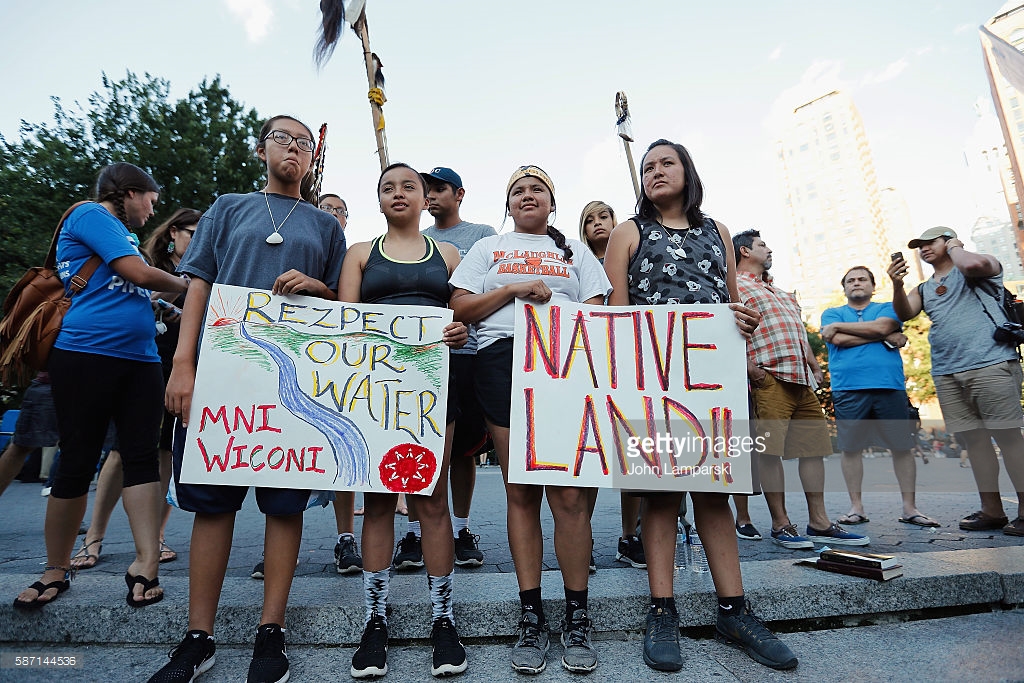 On Monday, the residents of spirit camp received a 48-hour notice that construction of the pipeline in their area would begin August 10. Brave Bull Allard described the news as “a blow to the people of Standing Rock.” Her defiant tone was shot through with frustration as she wrote, “We keep praying for the water and land. We are searching for every avenue through prayer to defeat this Black Snake. Please remember water is life.”

Protesters held out on the scene through the first night, but on August 11, local news sources reported arrests had begun. Meanwhile, Bismarck Times reprinted an emailed statement from Energy Transfer Partners that said, “We will press charges against anyone who interferes in the construction of the pipeline. Construction on the Dakota Access Pipeline will continue across all four states along the route.”

Activists posted videos online of civilians blocking the path to the construction site, some being forcibly removed by law enforcement. Others appealed online for supporters to join them on site, sending their message through Twitter with hashtags like #NoDAPL and #RezpectOurWater. According to Brave Bull Allard, the crowd had grown to approximately 200 protesters by Thursday evening, including members of other Native tribes, non-Native allies, and even actress Shailene Woodley.

While videos circulating online yesterday showed bulldozers breaking ground, the movement remains steadfast. A representative from Camp of the Sacred Stones said supporters have continued to pour into the site, and they “expect more today.” Emboldened by solidarity and prayer, they will continue to stand their ground.

Sarah Aziza is an Arab-American writer, graduate student and activist based in NYC. She has previously worked among refugee populations in North Africa, Jordan and the West Bank. Her areas of focus include immigration, human rights, international politics, feminism and mental health. She is a lover of the story-less-told. Find her on Twitter @SarahAziza1 or www.sarahaziza.com