The Power of “Nyet” 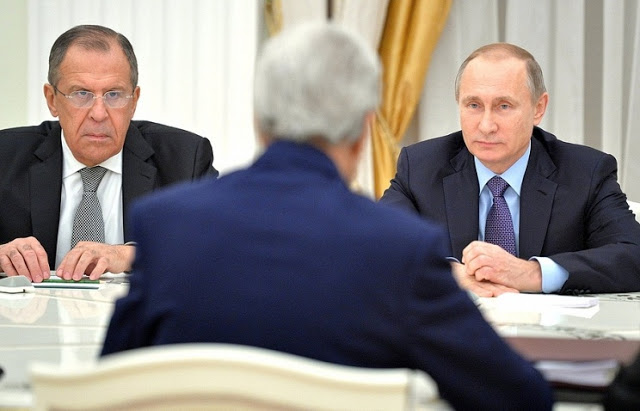 26 Jul 2016 – The way things are supposed to work on this planet is like this: in the United States, the power structures (public and private) decide what they want the rest of the world to do. They communicate their wishes through official and unofficial channels, expecting automatic cooperation. If cooperation is not immediately forthcoming, they apply political, financial and economic pressure. If that still doesn’t produce the intended effect, they attempt regime change through a color revolution or a military coup, or organize and finance an insurgency leading to terrorist attacks and civil war in the recalcitrant nation. If that still doesn’t work, they bomb the country back to the stone age. This is the way it worked in the 1990s and the 2000s, but as of late a new dynamic has emerged.

In the beginning it was centered on Russia, but the phenomenon has since spread around the world and is about to engulf the United States itself. It works like this: the United States decides what it wants Russia to do and communicates its wishes, expecting automatic cooperation. Russia says “Nyet.” The United States then runs through all of the above steps up to but not including the bombing campaign, from which it is deterred by Russia’s nuclear deterrent. The answer remains “Nyet.” One could perhaps imagine that some smart person within the US power structure would pipe up and say: “Based on the evidence before us, dictating our terms to Russia doesn’t work; let’s try negotiating with Russia in good faith as equals.” And then everybody else would slap their heads and say, “Wow! That’s brilliant! Why didn’t we think of that?” But instead that person would be fired that very same day because, you see, American global hegemony is nonnegotiable. And so what happens instead is that the Americans act baffled, regroup and try again, making for quite an amusing spectacle.

The whole Edward Snowden imbroglio was particularly fun to watch. The US demanded his extradition. The Russians said: “Nyet, our constitution forbids it.” And then, hilariously, some voices in the West demanded in response that Russia change its constitution! The response, requiring no translation, was “Xa-xa-xa-xa-xa!” Less funny is the impasse over Syria: the Americans have been continuously demanding that Russia go along with their plan to overthrow Bashar Assad. The unchanging Russian response has been: “Nyet, the Syrians get to decide on their leadership, not Russia, and not the US.” Each time they hear it, the Americans scratch their heads and… try again. John Kerry was just recently in Moscow, holding a marathon “negotiating session” with Putin and Lavrov. Above is a photo of Kerry talking to Putin and Lavrov in Moscow a week or so ago and their facial expressions are hard to misread. There’s Kerry, with his back to the camera, babbling away as per usual. Lavrov’s face says: “I can’t believe I have to sit here and listen to this nonsense again.” Putin’s face says: “Oh the poor idiot, he can’t bring himself to understand that we’re just going to say ‘nyet’ again.” Kerry flew home with yet another “nyet.”

What’s worse, other countries are now getting into the act. The Americans told the Brits exactly how to vote, and yet the Brits said “nyet” and voted for Brexit. The Americans told the Europeans to accept the horrendous corporate power grab that is the Transatlantic Trade and Investment Partnership (TTIP), and the French said “nyet, it shall not pass.” The US organized yet another military coup in Turkey to replace Erdoǧan with somebody who won’t try to play nice with Russia, and the Turks said “nyet” to that too. And now, horror of horrors, there is Donald Trump saying “nyet” to all sorts of things—NATO, offshoring American jobs, letting in a flood of migrants, globalization, weapons for Ukrainian Nazis, free trade…

The corrosive psychological effect of “nyet” on the American hegemonic psyche cannot be underestimated. If you are supposed to think and act like a hegemon, but only the thinking part still works, then the result is cognitive dissonance. If your job is to bully nations around, and the nations can no longer be bullied, then your job becomes a joke, and you turn into a mental patient. The resulting madness has recently produced quite an interesting symptom: some number of US State Department staffers signed a letter, which was promptly leaked, calling for a bombing campaign against Syria in order to overthrow Bashar Assad. These are diplomats. Diplomacy is the art of avoiding war by talking. Diplomats who call for war are not being exactly… diplomatic. You could say that they are incompetent diplomats, but that wouldn’t go far enough (most of the competent diplomats left the service during the second Bush administration, many of them in disgust over having to lie about the rationale for the Iraq war). The truth is, they are sick, deranged non-diplomatic warmongers. Such is the power of this one simple Russian word that they have quite literally lost their minds.

But it would be unfair to single out the State Department. It is as if the entire American body politic has been infected by a putrid miasma. It permeates all things and makes life miserable. In spite of the mounting problems, most other things in the US are still somewhat manageable, but this one thing—the draining away of the ability to bully the whole world—ruins everything. It’s mid-summer, the nation is at the beach. The beach blanket is moth-eaten and threadbare, the beach umbrella has holes in it, the soft drinks in the cooler are laced with nasty chemicals and the summer reading is boring… and then there is a dead whale decomposing nearby, whose name is “Nyet.” It just ruins the whole ambiance!

The media chattering heads and the establishment politicos are at this point painfully aware of this problem, and their predictable reaction is to blame it on what they perceive as its ultimate source: Russia, conveniently personified by Putin. “If you aren’t voting for Clinton, you are voting for Putin” is one recently minted political trope. Another is that Trump is Putin’s agent. Any public figure that declines to take a pro-establishment stance is automatically labeled “Putin’s useful idiot.” Taken at face value, such claims are preposterous. But there is a deeper explanation for them: what ties them all together is the power of “nyet.” A vote for Sanders is a “nyet” vote: the Democratic establishment produced a candidate and told people to vote for her, and most of the young people said “nyet.” Same thing with Trump: the Republican establishment trotted out its Seven Dwarfs and told people to vote for any one of them, and yet most of the disenfranchised working-class white people said “nyet” and voted for Snow White the outsider.

It is a hopeful sign that people throughout the Washington-dominated world are discovering the power of “nyet.” The establishment may still look spiffy on the outside, but under the shiny new paint there hides a rotten hull, with water coming in though every open seam. A sufficiently resounding “nyet” will probably be enough to cause it to founder, suddenly making room for some very necessary changes. When that happens, please remember to thank Russia… or, if you insist, Putin.

Dmitry Orlov, born 1962, is a Russian-American engineer and writer. He was born in Leningrad (now Saint Petersburg) and moved to the US at the age of 12. He has a BS in Computer Engineering and an MA in Applied Linguistics and was an eyewitness to the collapse of the Soviet Union over several extended visits to his Russian homeland between the late 1980s and mid-1990s. Orlov’s article Closing the ‘Collapse Gap:’ The USSR Was Better Prepared for Collapse than the US was very popular at energybulletin.net. If you want to contact me directly, my address is my first name – dot – my last name, at gmail.com. No spam, please.

One Response to “The Power of “Nyet””