6 Sep 2016 – Even in modern times we are fascinated by crystals – from the diamonds we use as a sacred symbol of partnership, to the plethora of ‘healing’ gems that can be found in a New Age gift shop. So we can only imagine how ancient people viewed these transparent rocks with hidden structure. 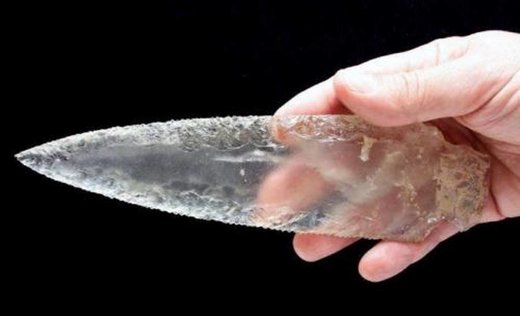 Evidence of the esteem in which crystals were held can be found in a “remarkable set” of ‘crystal weapons’ found in the megalithic tombs of southwestern Spain. At the site of Valencina de la Concepcion, archaeologists have uncovered crystal arrowheads, an exquisite dagger blade, and cores used for creating the artifacts that date to the 3rd millennium BCE.

The Montelirio tholos, excavated between 2007 and 2010, is “a great megalithic construction…which extends over 43.75 m in total”, constructed out of large slabs of slate. At least 25 individuals were interred within the structure , along with “an extraordinary set of sumptuous grave goods…the most notable of which is an unspecified number of shrouds or clothes made of tens of thousands of perforated beads and decorated with amber beads”. Additionally however, a large number of crystal arrowheads were found together, which be suggestive of a ritual offering at an altar. The arrowheads have the characteristic long lateral appendices of flint arrowheads from the area – but investigators remarked that “even greater skill must have been required to produce these unique features when using rock crystal.” 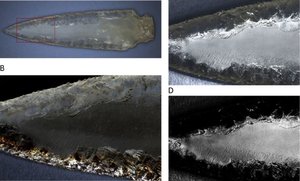 Structure 10.042-10.049 is another large two-chambered megalithic construction made from slate slabs. In the second chamber archaeologists found the body of a young male aged between 17 and 25 lying in the foetal position along with a large set of grave goods. These included an undecorated elephant tusk laid above the young man’s head, a set of 23 flint blades, and numerous ivory objects. Additionally, red pigment made from cinnabar had been sprayed over the body and the objects surrounding it. The “remarkable crystal dagger blade”, however, was not found with these grave goods, but instead in the upper level of this chamber.

The rock crystal dagger blade appeared in the upper level of Structure 10.049 of the PP4-Montelirio sector, in association with an ivory hilt and sheath, which renders it an exceptional object in Late Prehistoric Europe… The blade is 214 mm in length, a maximum of 59 mm in width and 13 mm thick. Its morphology is not unheard of in the Iberian Peninsula, although all the samples recorded thus far were made from flint and not rock crystal…

The manufacture of the rock crystal dagger blade must have been based on an accumulation of transmitted empirical knowledge and skill taken from the production of flint dagger blades as well from know-how of rock-crystal smaller foliaceous bifacial objects, such as Ontiveros and Montelirio arrowheads… It was obtained from a large monocrystal at least 220 mm in length and 60 mm in width. Given that these single crystals are hexagonal, they would have a similar width along all their different axes.

The rock crystal source used in creating the crystal weaponry has not been pinpointed exactly at this stage, though analysis suggests two potential sources, “both located several hundred km away from Valencina”.

Given the technical skill and difficulties involved in creating the objects from crystal, rather than flint, researchers believe the motives behind their construction must have been very specific. They note that while crystal objects were found throughout the site…

The more technically sophisticated items, however, were deposited in the larger megalithic structures…As such, it is reasonable to assume that although the raw material was relatively available throughout the community…only the kin groups, factions or individuals who were buried in megaliths were able to afford the added value that allowed the production of sophisticated objects such as arrow heads or dagger blades. 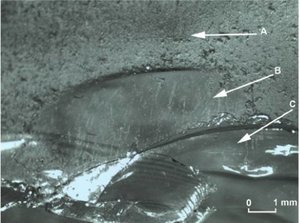 Dagger blade from Structure 10.049 (PP4-Montelirio sector). Microphotograph showing A: Main polishing; B: Retouching and polishing of the reverse; C: Final retouching of the edge, without polishing.
© Morgado, A., et al

In this respect, however, it is important to note that, paradoxically, none of the most sophisticated artefacts studied in this paper can be ascribed to any particular individual: the rock crystal dagger from Structure 10.042-10.049 was found in the upper level of the main chamber (10.049) in which no human bones were identified; in Montelirio, neither the core nor the arrowheads can be ascribed to any on 20 individuals found in the main chamber; lastly, in the case of Ontiveros, the only available publication offers no evidence that the 16 arrow heads were associated to any particular individual.

It seems therefore reasonable to suggest that rock crystal may have had a dual significance for the Chalcolithic society of Valencina. On the one hand, it had a social significance due to the exoticism of the material and the fact that its transformation required very specific skills and probably some degree of technical specialisation. These objects would have had a “surplus value” based on the exoticism and rarity of the raw material, the techno-economic investment of their manufacture (know-how limited to very few people) and their use linked to the world of beliefs and funerary practices. They probably represent funerary paraphernalia only accessible to the elite of this time-period.

On the other hand, rock crystal must have had a symbolic significance as a raw material invested with special meanings and connotations. The literature provides examples of societies in which rock crystal and quartz as raw materials symbolise vitality, magical powers and a connection with ancestors In her analysis of European Neolithic religion, Marija Gimbutas linked the ritual and votive use of white quartz nodules to a symbol of death and regeneration often associated with funerary spaces. Quartz and rock crystal were even portrayed as rocks with great supernatural powers in European Christian tradition. In his Lapidarium, King Alfonso X the Wise of Castile (1276-1279 CE) emphasized its power to connect human beings with the spiritual world, as well as its ability to protect them from danger.

Interestingly though, despite being found relatively frequently in burials of the 4th and 3rd millennia BCE, crystal implements disappear from later funerary monuments in the Early Bronze Age (beginning of the 2nd millennium BCE) – a “truly striking” development, researchers say, as it would seem “the use of this raw material as grave goods was almost entirely abandoned”, although the reason remains a mystery.