Majority of Senate That Impeached Rousseff under Investigation

49 of 81 Brazilian senators who ousted the president for corruption charges are themselves the targets of criminal inquiries. 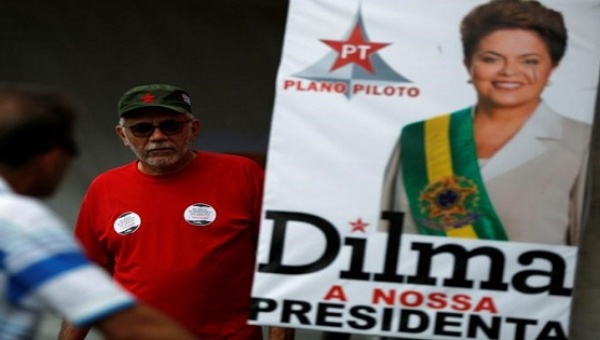 People walk next to an official photo of Brazil’s suspended President Dilma Rousseff, at a camp in support of Rousseff, in Brasilia, Brazil, August 28, 2016. | Photo: Reuters

31 Aug 2016 – More than half of the Senate voting to impeach Brazilian President Dilma Rousseff Wednesday [31 Aug] are themselves facing legal proceedings on charges of corruption.

According to news reports and official sources, 49 of Brazil’s 81 senators face crimes ranging from money laundering to illicit enrichment and electoral fraud.

By a margin of 61 to 20, the Senate voted Wednesday to remove the twice-elected Rousseff from office for doctoring the federal budget to influence voters in her successful 2014 election campaign. The contentious impeachment hearings had to be postponed following several altercations between senators, who each have accused each other of corruption and even drug use.

Rousseff is not accused of corruption or embezzlement. Instead, she was forced to step down over allegations that she cooked the federal budget books in the runup to her 2014 reelection to hide a government shortfall and woo voters. However, a June Senate report proved the allegations were false.

Conservative senators are trying to prove that she committed a “crime of responsibility,” the only charge for which a president can be impeached, but the president’s defenders consider that the predominantly opposition-held senate has no moral authority to judge her. Of the 13 Senators linked to Brazil’s “Operation Car Wash” scandal involving the state-owned oil company, Petrobas, 10 voted to impeach Rousseff Wednesday.

Many of the 81 senators have already spoke, most of them against Rousseff. The trial was resumed on Wednesday morning for the final vote on removing her.

IN DEPTH: The Coup That Ousted Brazilian Democracy

Testifying in her own defense, Rousseff recalled how she had endured torture as a dissident fighting the military dictatorship to articulate her belief in democracy. She had committed no impeachable offenses, she said, and urged the Senate to uphold their constitutional duty and vote against her impeachment.

She will be replaced by the interim President Michel Temer, who led the parliamentary coup and will continue to govern until 2018, despite his broad unpopularity with the electorate and pending corruption charges of his own.